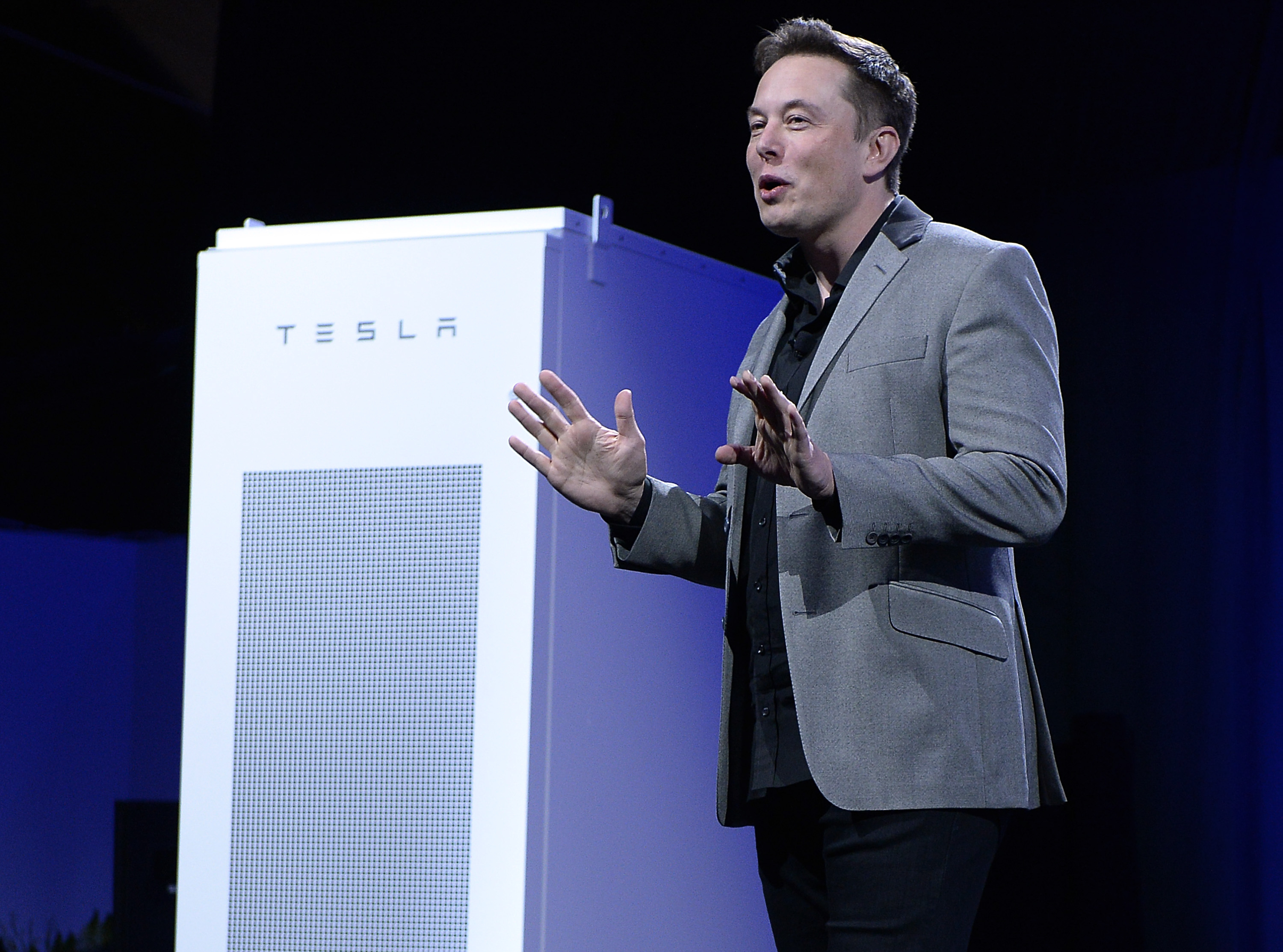 The CEO of electric car maker Tesla Motors hopes to park hundreds of millions of large, solar panel-connected batteries in homes and businesses so the world can disconnect from power plants - and he can profit. On Thursday night, before an adoring crowd and a party-like atmosphere, Musk unveiled how he intends to do it.

Musk took the stage at Tesla's design studio near Los Angeles International Airport, an audience of drink-toting enthusiasts cheering him on, in a scene fitting for an audacious dreamer renowned for pursuing far-out projects. Colonizing Mars is one of Musk's goals at Space X, a rocket maker that he also runs.

Now, he is setting out on another ambitious mission. "Our goal here is to fundamentally change the way the world uses energy," Musk told reporters gathered in Hawthorne, California.

"If more people adopt this emerging technology, this is something that could really power homes of the future," CNET senior editor Jeff Bakalar told CBS News. "The tech is already there, it's just crossing the bridge, transcending that barrier to entry is where the holdup exists right now."

With Telsa's "star power brand," Bakalar believes it really has a chance. Musk, he said, could end up being "the power messiah that gets it done."

Although Tesla will make the battery called "Powerwall," it will be sold by a variety of other companies. The list of partners includes SolarCity, a solar installer founded by Musk's cousins, Lyndon and Peter Rive. Musk is SolarCity's chairman and largest shareholder.

As with Tesla's electric cars, which start around $70,000, the battery might be too expensive for most consumers. The system will carry a suggested price of $3,000 to $3,500, depending on the desired capacity. Installation will be extra. That could discourage widespread adoption, especially for a product that may only have limited use.

"I don't believe this product in its first incarnation will be interesting to the average person," conceded Peter Rive, SolarCity's chief technology officer. Rive, though, still expects there to be enough demand to substantially increase the number of batteries in homes.

Musk is so encouraged by the initial demand that he believes Tesla and other future entrants in the market will be able to sell 2 billion battery packs around the world - roughly the same number of vehicles already on roads. Although that may sound like a "super crazy" goal, Musk insisted it "is within the power of humanity to do."

It will take a long time to get there. Tesla hopes to begin shipping a limited number of Powerwall batteries this summer in the U.S. before expanding internationally next year.

The long-term goal is to reduce the world's reliance on energy generated from fossil fuels while creating regional networks of home batteries that could be controlled as if they were a power plant. That would give utilities another way to ensure that they can provide power at times of peak demand.

For now, the battery primarily serves as an expensive backup system during blackouts for customers like David Cunningham, an aerospace engineer from Foster City, California. He installed a Tesla battery late last year to pair with his solar panels as part of a pilot program run by the California Public Utilities Commission to test home battery performance.

Although Cunningham's home has not endured a blackout in the six months that he has had the battery, it's capable of running critical home appliances like lights and refrigeration and can be recharged by solar panels during the day.

"As long as a person has solar panels, it's just a natural fit for the two to go together," Cunningham, 77, said. "I consider it to be a whole power system right here in my home."

Cunningham took advantage of state incentives that sharply reduced the battery's $18,300 sticker price under the pilot program. He still paid $7,500.

"The value proposition now is around reliability and backup power more than it is around savings, but over time that may change," said Shayle Kahn, an analyst at GTM Research.

The batteries are likely to become more useful if, as expected, more utilities and regulators allow power prices to change throughout the day based on market conditions. That way, the software that controls the solar and battery system will allow customers to use their home-generated power - and not expensive grid power - when grid prices spike.

Many commercial customers already buy power this way, and Tesla also announced battery systems designed for them, along with bigger battery packs that utilities can use to manage their grids. Analysts say these utility and commercial markets will probably be more promising for Tesla during the next few years than residential customers.

Tesla is building a giant factory in Nevada that will begin churning out batteries in 2017, so Musk needs to begin drumming up customers now. The spotlight may help Musk push policy makers and utilities to consider reshaping regulations so solar and battery storage could be more easily incorporated into the larger electric system, Kahn said.

Tesla's ambitions already have intrigued homeowners like Mike Thielen, who installed one of the prototype batteries with SolarCity panels on his Redondo Beach, California, home last year. Although he hasn't needed the backup power yet, he has embraced the concept.

"I think it's brilliant," he said. "I would consider upgrading to a more powerful home battery if they could figure out a way to get me totally off the grid."