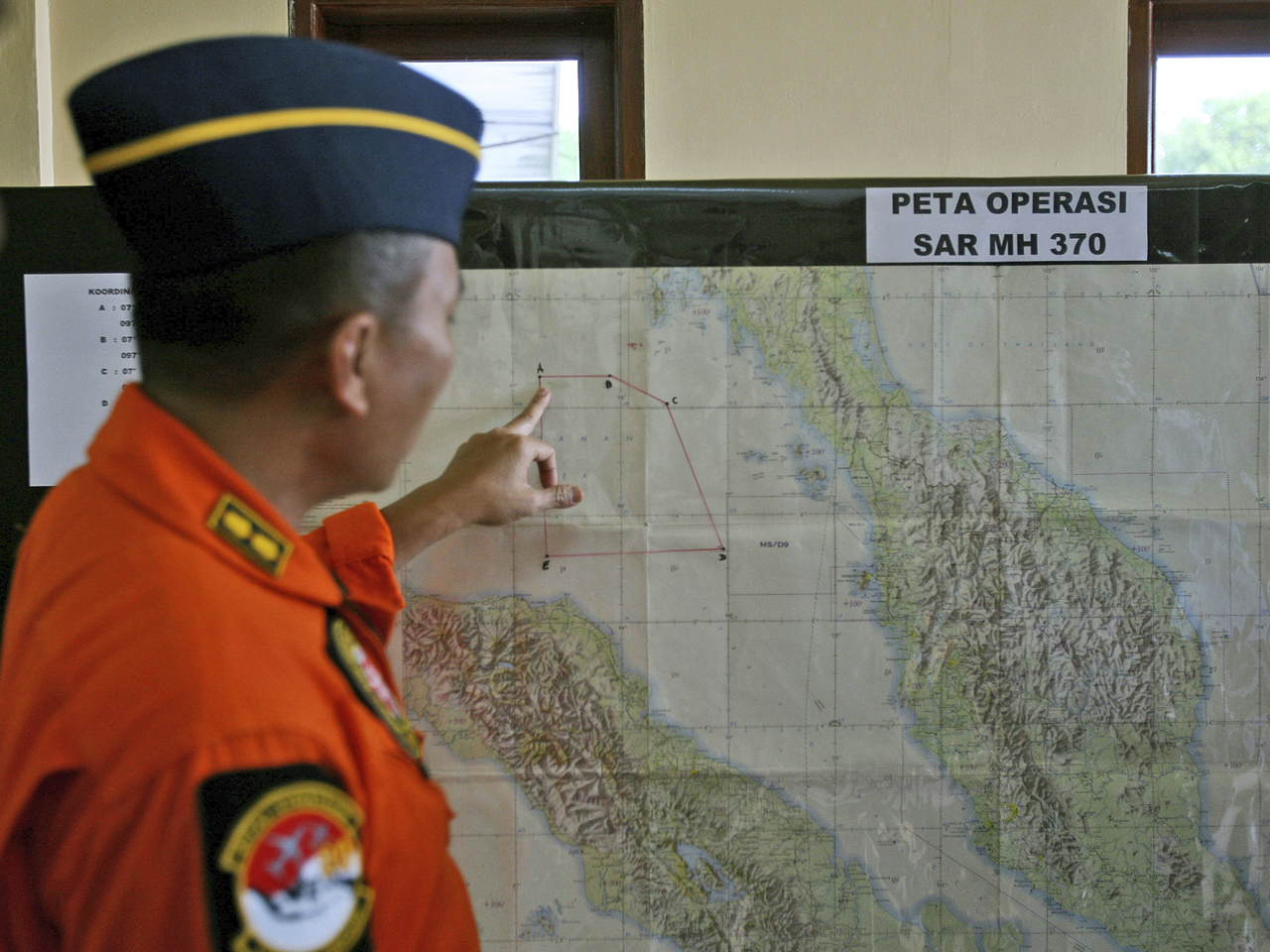 KUALA LUMPUR, Malaysia -- At least one of the two men traveling on a missing Malaysian Airlines jetliner was an Iranian asylum seeker, officials said Tuesday, as baffled authorities expanded their search for the Boeing 777 on the opposite side of the country from where it disappeared nearly four days ago with 239 people on board.

In the absence of any sign that the plane was in trouble before it vanished, speculation has ranged widely, including pilot error, plane malfunction, hijacking and terrorism, the last because two passengers were traveling on stolen passports. The terrorism theory weakened after Malaysian authorities determined that one of the two men was an Iranian asylum seeker.

Interpol Secretary General Ronald Noble said at a news conference Tuesday that the international police agency had identified two Iranian men, Pouri Nour Mohammadi, 18, and Delavar Seyed Mohammad Reza, 29. Noble said based on investigations carried out into the men to date, they were "probably not terrorists." The chief of police in Kuala Lumpur said earlier in the day that Mohamadi was apparently trying to fly to Europe as an asylum seeker.

The plane took off from Kuala Lumpur, on the western coast of Malaysia, early Saturday en route to Beijing. It flew overland across Malaysia and crossed the eastern coast into the Gulf of Thailand at 35,000 feet. There it disappeared from radar screens. The airline says the pilots didn't send any distress signals, suggesting a sudden and possibly catastrophic incident.

In a statement, Malaysia Airlines said search and rescue teams "have expanded the scope beyond the flight path to the West Peninsula of Malaysia at the Straits of Malacca." An earlier statement had said the western coast of Malaysia was "now the focus," but the airline subsequently said that phrase was an oversight.

"The search is on both sides," Civil aviation chief Azharuddin Abdul Rahman said, adding that the previous statement didn't mean that the plane was more like to be off the western coast.

Oceanographer David Gallo led the 2009 search for Air France Flight 447, which went down in deep water in a remote section of the Atlantic Ocean. Search teams located the wreckage within five days but it took another two years to the flight data recorders in an underwater mountain range,

"I always like to think that we need to start by finding the haystack, and then we can look for the bits of the needle in that haystack and in this case the haystack is huge because we just don't have the clues," Gallo told CBS News.

The new statement said authorities are looking at a possibility that MH370 attempted to turn back toward Kuala Lumpur. If it did indeed retrace its path, the plane could conceivably have crashed into the sea on the western coast, the other side of Malaysia from where it was reported missing. But this doesn't explain why it did not continue to show on radar while flying back toward Kuala Lumpur, and Malaysia Airlines or other authorities have not addressed that question.

"All angles are being looked at. We are not ruling out any possibilities," is all that the Malaysia Airlines statement said.

Malaysia's air force chief also said Sunday there were indications on military radar that the jet may have done a U-turn.

Over the last three days the search mission has grown to include nine aircraft and 24 ships from nine countries, which have been scouring the Gulf of Thailand on the eastern side of Malaysia. Apart from the sea, land areas are also being searched.

China, where two-thirds of the passengers were from, has urged Malaysian authorities to "speed up the efforts" while also contributing ships and helicopters to the search.

A shopping mall in Beijing suspended advertising on its large outdoor LED screen to display a search timer -- an image of an airplane along with a digital clock marking the time since contact with the flight was lost.

The United States has sent two navy ships, at least one of which is equipped with helicopters, and a Navy P-3C Orion plane whose onboard sensors enable the crew to clearly detect small debris in the water.

The search began on Saturday morning at the point the plane was last known to be. But with no debris found, the search has been systematically expanded to include areas where the plane could have in theory ended up, given the amount of fuel it had on board. That is an area many thousands of square miles wide.

Vietnamese planes and ships are a major component of the international search and rescue effort.

Lt. Gen. Vo Van Tuan, deputy chief of staff of Vietnamese People's Army, said authorities on land had also been ordered to search for the plane, which could have crashed into mountains or uninhabited jungle. He said military units near the border with Laos and Cambodia had been instructed to search their regions, as well.

Malaysia Airlines, meanwhile, said it is investigating an Australian television report that the co-pilot on the missing plane had invited two women into the cockpit during a flight two years ago.

Jonti Roos described the encounter on Australia's "A Current Affair." The airline said it wouldn't comment until its investigation is complete.

Roos said she and her friend were allowed to stay in the cockpit during the entire one-hour flight on Dec. 14, 2011, from Phuket, Thailand, to Kuala Lumpur. She said the arrangement did not seem unusual to the plane's crew.

Roos didn't immediately reply to a message sent to her via Facebook..