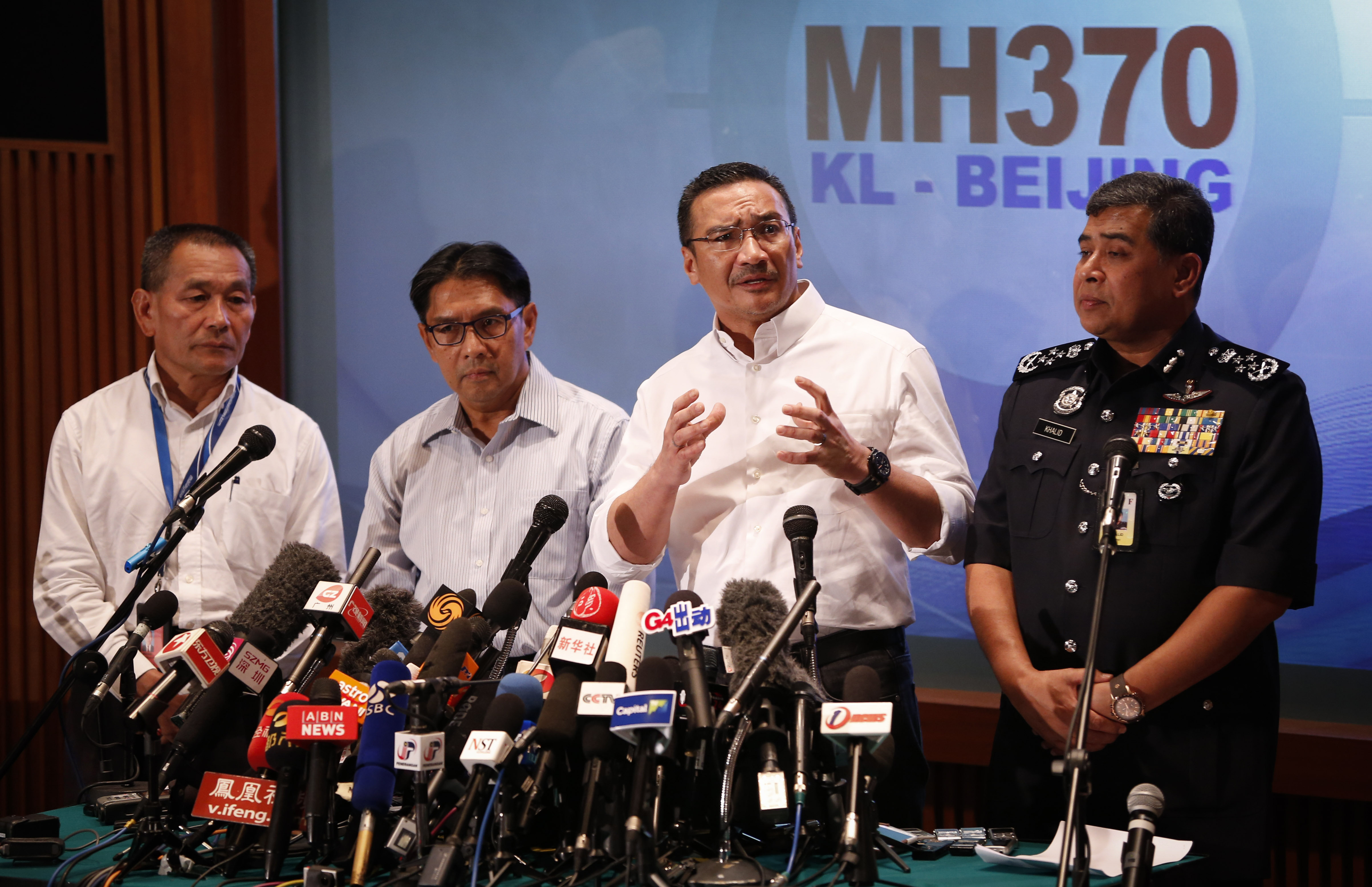 KUALA LUMPUR, Malaysia - In a press conference Sunday Malaysian authorities said the number of countries involved with the search and rescue operation for Malaysia Airlines Flight 370 has increased from 14 to 25.

Authorities are checking on ground staff, crew and passengers.

Police have not received background checks on all the passengers. Police chief Inspector General Khalid Abu Bakar said they are still waiting for other countries to respond. So far nothing alarming has come from the information they have received.

Malaysian police are also examining a flight simulator belonging to one of the pilots of the missing jetliner and investigating engineers who worked on the plane, sharpening the probe into the jet's disappearance after authorities revealed it was a deliberate act.

The government said police searched the homes of both of the plane's pilots on Saturday, but did not say whether it was the first time officers had done so since the flight went missing more than a week ago with 239 people aboard en route to Beijing from Kuala Lumpur.

Officials revealed that the final words from the cockpit - "All right, good night" - were spoken to air traffic controllers after the plane's data communication system had been partially disabled. The pilots did not mention any trouble on board, suggesting they may have been misleading ground control.

Asked what the significance of this was, air force Maj. Gen. Affendi Buang told reporters: "This will tell you something ... because this is something not normal that the pilot would do."

Affendi said he did not know whether it was the pilot or co-pilot who spoke to air traffic controllers. That uncertainty also opened the possibility that someone else spoke those words, though he did not mention this scenario.

Given the expanse of land and water that might need to be searched, the wreckage of the plane might take months - or longer - to find, or might never be located. Establishing what happened with any degree of certainty will likely need key information, including cockpit voice recordings, from the plane's flight data recorders.

ACARS is used to send information about the plane's engines and other parts to the airline. Even though it was disabled on Flight 370, it continued to send out faint hourly pulses that were recorded by a satellite. The last "ping" was sent out at 8:11 a.m. - 7 hours and 31 minutes after the plane took off. It placed the jet somewhere in a huge arc as far north as Kazakhstan in Central Asia or far into the southern Indian Ocean.

Given that the northern route the plane may have taken would take it over countries with busy airspace, most experts say the person in control of the aircraft would more likely have chosen the southern route. The southern Indian Ocean is the world's third-deepest and one of the most remote stretches of water in the world, with little radar coverage.

"If we [the plane] started to go north, I believe this aircraft would be tracked would have all kinds of curiosity about it from the various governments and military that would be flying in that area. We're talking at least the Pakistanis, the Indians, the Chinese, even the Americans would have great interest in an unidentified aircraft flying in that airspace," said Mark Rosenker, CBS News Aviation Safety Analyst and former chairman of the National Transportation Safety Board.

Malaysian officials and aviation experts said that whoever disabled the plane's communication systems and then flew the jet must have had a high degree of technical knowledge and flying experience, putting one or both of the pilots high on the list of possible suspects.

While many people believe the plane has crashed, there is a very small possibility it may have landed somewhere and be relatively intact. Affendi, the air force general, and Hishammuddin, the defense minister, said it was possible for the plane to "ping" when it was on the ground if its electrical systems were undamaged.

Malaysia has asked for help from countries in South, Central and Southeast Asia for assistance in tracing the jet by providing satellite and radar data, the government said in a statement. It said that for now, both the northern and southern routes that the plane may have taken were being treated with "equal importance."

There appeared to be some confusion over where to search as India, one of 12 countries contributing planes and vessels to the hunt, said it had stopped looking while waiting for confirmation from Malaysia on where to search.

Australia said it was sending one of its two AP-3C Orion aircraft involved in the search to the remote islands in the Indian Ocean at Malaysia's request. The plane will search the north and west of the Cocos Islands, a remote Australian territory with an airstrip about 1200 kilometers (745 miles) southwest of Indonesia, military chief Gen. David Hurley said.

Malaysia's acting transport minister tweeted that he was in meetings to decide the "next course of action."

In the first detailed account of what happened to the plane, Prime Minister Najib Razak said Saturday that someone severed communications with the ground and deliberately diverted Flight 370 back over the Malay Peninsula early on March 8.

The revelations raised questions over possible lapses by Malaysian authorities, including why the air force wasn't aware that a jetliner was flying over the country. It also triggered speculation over who on the plane was involved - and what motive they might have for flying away with an aircraft carrying a 12-person crew and 227 passengers.

Malaysian authorities have not ruled out any possibilities, and to establish what happened with any degree of certainty investigators will likely need to examine information, including cockpit voice recordings, from the plane's flight data recorders should the jet be located.

The government's statement on Sunday gave few details on the police investigation into the pilots. It said police searched the homes of both the pilot and the co-pilot and were examining an elaborate flight simulator belonging to Zaharie Ahmad Shah, the 59-year-old pilot.

Zaharie, who has children, had previously posted photos online of the flight simulator he built for his home using three large computer monitors and other accessories. Earlier this week, the head of Malaysia Airlines said this was not in itself cause for any suspicion.

Saying this was per normal procedure, the statement also said police were investigating engineers who may have had contact with the plane before it took off.

Najib said Saturday that investigators had a "high degree of certainty" that one of the plane's communications systems - the Aircraft and Communications Addressing and Reporting System, or ACARS - was partially disabled before the plane reached the east coast of Malaysia. Shortly afterward, someone on board switched off the aircraft's transponder, which communicates with civilian air traffic controllers.

Malaysian officials and aviation experts said that whoever disabled the plane's communication systems and then flew the jet must have had a high degree of technical knowledge and flying experience, putting the pilots at the top of the list of possible suspects.

Najib confirmed that Malaysian air force defense radar picked up traces of the plane turning back westward, crossing over Peninsular Malaysia into the northern stretches of the Strait of Malacca. Authorities previously had said this radar data could not be verified.

The air force has yet to explain why it did not spot the plane flying over the country and respond. The search was initially focused on the Gulf of Thailand and the South China Sea, where the plane severed its communication links. That search has now ended.

"One thing that does bother me greatly is the fact that unidentified aircraft could navigate back over Malaysia and out to sea without a physical or material response to that fact," said Britain-based aviation security consultant Chris Yates. "They were not watching."

Not much is known publicly about the two pilots.

Zaharie, who joined Malaysia Airlines in 1981, had more than 18,000 hours of flying experience.

Co-pilot Fariq Abdul Hamid, 27, was contemplating marriage after having just graduated to the cockpit of a Boeing 777. He has drawn scrutiny after the revelation that he and another pilot invited two female passengers to sit in the cockpit during a flight in 2011.

Neighbors and friends interviewed this week said Fariq played futsal, a modified form of soccer popular in Southeast Asia, with neighborhood youngsters, and that he paid for their sports shirts.