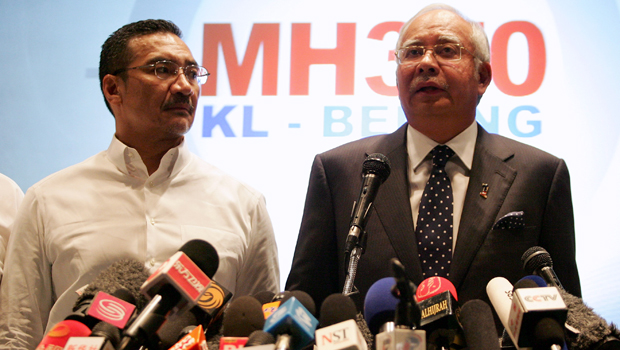 KUALA LUMPUR, Malaysia - Someone deliberately diverted Malaysia Airlines Flight 370 and shut down communications with the ground, and the jetliner continued flying for six hours, Malaysia's prime minister said Saturday. The announcement shifted the focus of the investigation to the crew and passengers on the plane, which has now been missing for more than a week.

Prime Minister Najib Razak's statement also meant the flight path of Malaysia Airlines Flight 370 to Beijing could have strayed as far as the southern Indian Ocean or northwest to Kazakhstan, complicating the work of search crews who already have been scouring vast stretches of ocean seeking the plane's 12-person crew and 227 passengers.

Police on Saturday told CBS News that the homes of all of the jetliner's flight crew were searched after being under surveillance for the last few days. Authorities have said they will be investigating the pilots as part of their probe, but have released no information about how they are progressing.

"Clearly the search for (Flight) MH370 has entered a new phase," Najib said at a televised news conference.

Experts have previously said that whoever disabled the plane's communication systems and then flew the jet must have had a high degree of technical knowledge and flying experience. One possibility they have raised was that one of the pilots wanted to commit suicide.

Najib stressed that investigators were looking into all possibilities as to why the plane deviated so drastically from its original flight path, saying authorities could not confirm whether or not it was a hijacking. Earlier Saturday, a Malaysian government official called the plane's disappearance a hijacking to The Associated Press, though he said no motive had been established and no demands had been made known.

"In view of this latest development, the Malaysian authorities have refocused their investigation into the crew and passengers on board," Najib told reporters, reading from a written statement but not taking any questions.

The plane was carrying 239 people when it departed for an overnight flight from Kuala Lumpur to Beijing at 12:40 a.m. on March 8. The plane's communications with civilian air controllers were severed at about 1:20 a.m., and the jet went missing - heralding one of the most puzzling mysteries in modern aviation history.

Investigators now have a high degree of certainty that one of the plane's communications systems - the Aircraft and Communications Addressing and Reporting System - was disabled before the aircraft reached the east coast of Malaysia, Najib said. Shortly afterward, someone on board then switched off the aircraft's transponder, which communicates with civilian air traffic controllers.

The prime minister confirmed that Malaysian air force defense radar picked up traces of the plane turning back westward, crossing over Peninsular Malaysia into the northern stretches of the Strait of Malacca. Authorities previously had said this radar data could not be verified.

"These movements are consistent with deliberate action by someone on the plane," Najib said.

Although the aircraft was flying virtually blind to air traffic controllers at this point, onboard equipment continued to send "pings" to satellites.

U.S. aviation safety experts say the shutdown of communications systems makes it clear the missing Malaysia Airlines jet was taken over by someone who knew how the plane worked.

To turn off the transponder, someone in the cockpit would have to turn a knob with multiple selections to the "off" position while pressing down at the same time, said John Goglia, a former member of the U.S. National Transportation Safety Board. That's something a pilot would know, but it could also be learned by someone who researched the plane on the Internet, he said.

The Aircraft Communications Addressing and Reporting System has two aspects, Goglia said. The information part of the system was shut down, but not the transmission part. In most planes, the information section can be shut down by hitting cockpit switches in sequence in order to get to a computer screen where an option must be selected using a keypad, said Goglia, an expert on aircraft maintenance.

That's also something a pilot would know how to do, but that could also be discovered through research, he said.

But to turn off the other transmission portion of the ACARS, it would be necessary to go to an electronics bay beneath the cockpit. That's something a pilot wouldn't normally know how to do, Goglia said. The Malaysia plane's ACARS transmitter continued to send out blips that were recorded by satellite once an hour for four to five hours after the transponder was turned off. The blips don't contain any messages or data, but the satellite can tell in a very broad way what region the blips are coming from.

Najib said the last confirmed signal between the plane and a satellite came at 8:11 a.m. - 7 hours and 31 minutes after takeoff. This was more than five hours later than the previous time given by Malaysian authorities as the possible last contact.

Airline officials have said the plane had enough fuel to fly for up to about eight hours.

"The investigations team is making further calculations which will indicate how far the aircraft may have flown after this last point of contact," Najib said.

He said authorities had determined that the plane's last communication with a satellite was in one of two possible "corridors" - a northern one from northern Thailand through to the border of the Central Asian countries Kazakhstan and Turkmenistan, and a southern one from Indonesia to the southern Indian Ocean.

He said that searching in the South China Sea, where the plane first lost contact, had ended.

Two-thirds of the plane's 227 passengers were Chinese, and the Beijing government is under pressure to give relatives firm news of the plane's fate. In a statement after Najib finished speaking, Beijing urged "Malaysia to expand and clarify the search areas based on the latest information and step up search efforts," Chinese Foreign Ministry spokesman Qing Gang said. "We ask Malaysia to involve more countries in the search."

Malaysia has faced accusations that it isn't sharing all its information or suspicions about the plane's final movements, which have been the subject of constant media leaks both in Malaysia and the United States. Najib said that he understood the need for families to receive information, but that his government wanted to release only fully corroborated information.

He said that from Day One, the country had been sharing information with international investigators, even when it meant placing "national security concerns" second to the search, a likely reference to its release of military radar data. U.S., British and Malaysian air safety investigators have been on the ground in Malaysia to assist with the investigation.

In the Chinese capital, relatives of passengers who have anxiously awaited news at a hotel near Beijing's airport said they felt deceived at not being told earlier about the plane's last signal. "We are going through a roller coaster, and we feel helpless and powerless," said a woman, who declined to give her name.

At least one of the people waiting at the hotel saw a glimmer of hope in word that the plane's disappearance was a deliberate act, rather than a crash. "It's very good," said a woman, who gave only her surname, Wen.

Malaysian police have already said they are looking at the psychological state, family life and connections of pilot Zaharie Ahmad Shah, 53, and co-pilot Fariq Abdul Hamid, 27. Both have been described as respectable, community-minded men.

Zaharie joined Malaysia Airlines in 1981 and had more than 18,000 hours of experience. His Facebook page showed an aviation enthusiast who flew remote-controlled aircraft, posting pictures of his collection, which included a lightweight twin-engine helicopter and an amphibious aircraft.

Fariq was contemplating marriage after having just graduated to the cockpit of a Boeing 777. He has drawn scrutiny after the revelation that in 2011, he and another pilot invited two women aboard their aircraft to sit in the cockpit for a flight from Phuket, Thailand, to Kuala Lumpur.

Fourteen countries are involved in the search, which is using 43 ships and 58 aircraft

The USS Kidd destroyer arrived late Friday in the Strait of Malacca, from where U.S. officials said it would move into the Bay of Bengal to help in the search. It uses a "creeping-line" search method of following a pattern of equally spaced parallel lines in an effort to completely cover an area.

A P-8A Poseidon, the most advanced long-range anti-submarine and anti-surface warfare aircraft in the world, was to arrive over the weekend and sweep parts of the Indian Ocean. It has a nine-member crew and has advanced surveillance and reconnaissance capabilities, the U.S. Defense Department said in a statement.