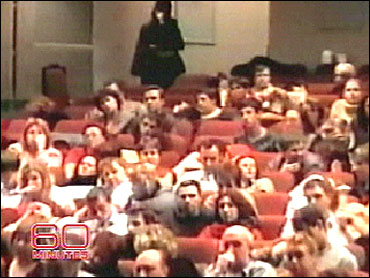 A year ago this month, a group of heavily armed Muslim extremists from the Russian province of Chechnya burst into a Moscow theatre during a performance and took more than 800 members of the cast and audience hostage.

Now, a documentary called "Terror in Moscow," which had its first showing on HBO last week, shows graphically what it was like to be in that audience when the terrorists literally seized the spotlight. Correspondent Ed Bradley reports.

Playing at the theater that Wednesday night was a hit Russian musical about the Red Army in World War II, so when masked gunmen burst on stage, the audience at first thought that it was all part of the show.

The moment was captured by the theater's video camera.

But when those gunmen announced that if the Russian Army didn't get out of Chechnya they would blow up the theater, the audience realized that they had just become players in a terrifying real-life drama. Video footage, shot during the siege by one of the terrorists, shows what the Russians were up against.

The leader of the suicide squad was Movsar Barayev, 25, the nephew of a Chechen rebel leader. With him were 21 men and 19 women. The women's job was to guard the hostages, and on command, to detonate the explosives strapped to their waists.

"The Chechen women showed us their bomb belts. All they'd have to do was to connect two wires," says Irina Kuminova. "If just one of them did this, her bomb alone would set off all the other bombs nearby."

It was clear from the start that the Kremlin, which has been fighting a separatist war in Chechnya for the last decade, would never give in to the terrorists' demands. Friends and relatives could only pray that in some way, the hostages would be rescued. But everyone expected a disaster.

"My son and I shook with fear. Everyone was shaking so hard that the entire row was rocking," says Lena Baranovskaya. "My husband said, 'Calm down, we're going to be here for a long time.'"

Six hours into the siege, as the Russians desperately tried to come up with a solution, a young woman, an ordinary Moscow citizen, slipped through the police cordon and was seen making her way into the theater. As she entered the auditorium, one of the guitarists from the orchestra saw the terrorist leader confront her.

"She pushed Barayev aside. 'Get out,' she said, and turned to the audience. 'What are you all scared of? He's just a clown, and this is all a big farce,'" recalls Ilya Lysak. "One of the gunmen pushed her through the side doors, and then fired his Kalashnikov three times."

"A dreadful, deep silence fell over the auditorium," says Baranovskaya. "It froze our bodies, our hearts and our souls."

Thursday morning dawned, and there was still no sign of a Russian counterattack or any word from President Putin in the Kremlin.

The Chechens allowed some members of the Russian Parliament to enter the building and they managed to negotiate the release of a few children. Later in the day, two doctors volunteered to go in but before they could treat any hostages, they were made to bring out the body of the young woman who had tried to intervene the night before. She was 26 years old and had worked in a store nearby.

In a command post across the road from the theater, the Russian security police debriefed everyone who came out. But so far, no one had been able to meet Barayev, the leader of the suicide squad. Then, a British Sunday Times newspaper reporter got hold of Barayev's cell phone number, and after talking his way into the theater, he recorded an interview with him.

"We have one aim -- to get the Russians out of Chechnya," said Barayev. "They call us terrorists. But we'd have asked for a plane and a million dollars if we were terrorists."

All of the terrorists were Chechens except one, who was a Gulf Arab and one of Barayev's deputies.

By the second day of the siege, conditions inside the auditorium were deteriorating. The theater toilets were all out of bounds and to relieve themselves, the hostages had to climb down into the orchestra pit.

"In the orchestra pit it was men on the left, women on the right," says Lysak. "The stench was so foul that the faces of the hostages in the front row ran with sweat."

While the Chechen gunmen patrolled the rest of the building, the women with their bomb-belts and hand guns stayed guarding the people they had sworn to kill. One suicide bomber, a 24-year-old university student named Kaira, was interviewed by a Russian TV crew in the early hours of Friday morning.

"Our women, children and old people are dying. No one pities us," says Kaira. "Even if we all die here, this won't end. Many more will take our place."

Kaira was not an exception. Behind the other veils were educated and worldly women - an accountant, a teacher, and an actor. Many had been married to Chechen rebels who had been killed by the Russians. To their hostages, the black widows, as the Russians later dubbed the Chechen women, seemed to be just as much victims as themselves.

"Many of the women cried and I wondered, who is going to shed more tears, them or us? They were afraid to die, just like everyone else," says Kristina Koropitian.

Three days into the siege, and Russia's elite counter-terrorist force, Alpha, was getting ready for action.

But inside the theater many of the hostages, including the 12-year-old son of Irina Fadayeva, had already given up hope.

"My son said, 'Mom, no one's going to save us. I need to know, how will I recognize you in heaven?' I replied, 'You won't need to, son. I've got your hand and I'm not letting go. We'll be there together.' Then he said, 'Mom, I really don't want to die,'" recalls Fadayeva.

"I've often heard it said that people have a premonition of death. I never believed it. But I'd worked in the orchestra for two years and knew all the actors and musicians really well," says Lysak. "The ones who died all had this look in their eyes. They weren't there anymore."

With still no word from the Kremlin, the terrorists decided to turn up the heat on the Russians and they announced that they would start executing the hostages at midnight. But an hour before the deadline, one of the gunmen received a phone call from Gen. Kazantsev, the Kremlin's special envoy in Chechnya.

Gen. Kazantsev told the terrorists that if they held off on the executions, he would fly to Moscow and be at the theater by 11 a.m. the next morning for face-to-face negotiations.

"Barayev's mood changed, we all felt it," says Lysak. "He said, 'At last, Kazantsev is coming for talks.' Then they handed out some juice, and some of the gunmen took off their masks."

But later that evening, a young hostage panicked and a gunman fired two shots. One bullet fatally wounded a male hostage and the other hit Tamara Starkova in the chest.

"Blood sprayed onto my daughter's face. My husband shouted, 'You Chechen scum, you've killed my daughter,'" recalls Starkova. "She said, 'No dad, it's not my blood.' Then he looked at me. I was clutching my side."

The terrorists let an ambulance approach to take the wounded hostages away. Tamara pleaded in vain for her husband and her 13-year-old daughter to be allowed to go with her.

"My husband was crying. I held his hand. I knew I'd never see him again," says Starkova. "I said, 'Goodbye. I love you...' But I never said goodbye to my daughter."

The terrorists had released the wounded hostages, not out of pity, but to make sure that the Russians understood the shootings were an accident and didn't call off the proposed negotiations.

"I woke up and saw a grey mist coming down. There was a hissing sound and a strange, bitter smell," says Ivan Oganesyan.

The Russians had pumped gas into the auditorium through the theater's ventilation system. As the gunmen fled to other parts of the building, the Chechen women remained at their posts.

"I saw them moving around," adds Oganesyan. "I couldn't understand why they hadn't blown us up."

The gunmen began to shoot blindly through the windows, but the Russians stayed put, waiting for the gas to take effect. If a single Chechen widow had remained conscious and detonated her explosives as the Russian soldiers stormed the building, there would have been no survivors.

At last, 25 minutes after the gas had been released, the Alpha force went in. In a theater storeroom, Barayev and his followers made a brief last stand.

After killing the gunmen, the Russian troops entered the auditorium and shot dead the unconscious Chechen women.

"Why didn't they explode their bombs? I remember one of the Chechen women telling us earlier, 'Don't worry, without the order I won't set off the bomb.' I think they just never got that order," says Oganesyan.

All the terrorists were killed without the loss of a single soldier, and the Russians could pride themselves on a successful military operation. But it soon became obvious that the rescue operation was a disaster.

Unconscious hostages were carried out with their heads rolled back and laid face-up in the rain. Dozens simply choked on their vomit, or swallowed their tongues. Only five days later did the authorities overcome the old Soviet habit of secrecy, and reveal that the gas they'd used was a powerful narcotic called fentanyl. By then, it was too late for doctors to give an antidote that could have saved many lives.

"The last thing that I said to my son was that we'd always be together. So I left the morgue where he was and jumped off a bridge," says Fadayeva. "But I didn't pass out and I was rescued. The river was full of ice but I didn't even catch a cold."

"I said to myself over and over, 'I command you to live, I'm waiting for you.' I believed that my husband and son were still alive until my mother and sister came to the hospital," says Baranovskaya. "I took one look at them and asked, 'Not both of them, surely?' Mother said, 'Yes, both of them.'"

A total of 129 hostages died in the bungled aftermath of the Moscow theater siege. In the end, the black widows of Chechnya had their revenge.

Since the theatre siege, the Chechen black widows have struck again in Moscow. Last July, two of them killed at least 16 people when they detonated the explosives in their belts at a rock concert in the Russian capital. The documentary, "Terror in Moscow," will be repeated on HBO2 next week.