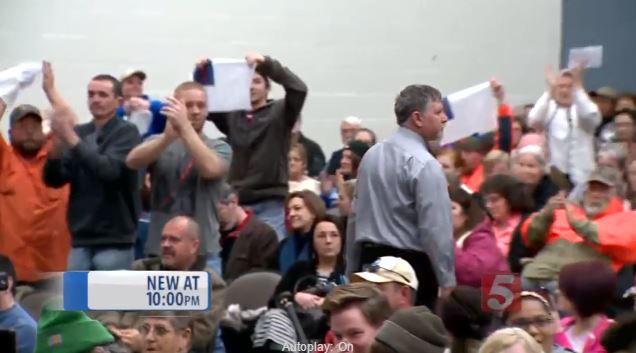 WINCHESTER, Tenn. - A group of students at Franklin County High School in Tennessee wanted a safe environment to talk about issues affecting the gay community, especially bullying, so they started a club that invited people of all sexual orientations to do so.

The Gay-Straight Alliance they formed can be found in several variations in high schools across America, but to many parents in the Franklin County Schools, they're no better than terrorists, according to CBS affiliate WTVF in Nashville.

At a school board meeting Monday night, resident Robert Widelick took to the microphone and said he doubted the groups agenda that he claims they're trying to impose on people who attend their meetings.

"There's really no place for discussion of sexual orientation in a public high school," Widelick said.

Dozens of supporters stood up, cheered and waved towels and signs after Widelick shared his opinion at the meeting.

A social media page created last month called for school board members to move the club off campus. WTVF reports one parent on Facebook compared the Gay-Straight Alliance to ISIS.

"We have a complicated county, and we have lots of differing points of view," said Jennie Turrell, the faculty adviser for the organization, "and valid views and powerful views on both sides of this conversation."

Franklin County Schools Director Amie Lonas said the organization, which was created to promote tolerance and acceptance, followed the proper procedure to establish the club. Students say it was really largely done in response to bullying. The group was granted approval to form by school officials in December.

"It's a safe environment for students to get together and just talk," Lonas said.

While the Gay-Straight Alliance was allowed to form, some critics said that no organized meetings were held before members of the community began to question its motives and intent.

The school did not make a decision about whether to keep allowing the club on Monday evening, so it will continue to meet normally. Meanwhile, officials are looking through the policies for creating clubs on schools.

District officials said because of federal funding, they cannot decide to ban the Gay Straight Alliance. The only option would be to ban all schools.