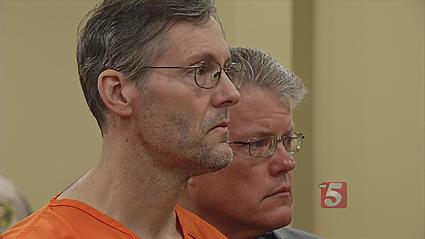 LEBANON, Tenn. - A Tennessee man pleaded guilty Tuesday to killing his wife's parents with a bomb disguised as a lamp to get out of repaying the couple a $40,000 debt.

Richard Parker entered the plea Tuesday in Wilson County Criminal Court in a deal that calls for him to serve life in prison without parole. CBS affiliate WTVF reports the deal allows Parker, who is either 49 or 50, to avoid the death penalty, which prosecutors had filed to seek in the event the case went to trial.

Parker is the son-in-law of Jon and Marion Setzer, who were killed at their house on February 10 when they plugged in the lamp that was in a package left on their porch by Parker. He lived directly behind them in rural Wilson County, which is about 30 miles east of Nashville.

The blast killed 74-year-old Jon Setzer, a retired lawyer. His wife, 72-year-old Marion Setzer, later died at a Nashville hospital from her injuries. Authorities said a handwritten note in the package had instructed the couple to plug in the lamp.

Assistant District Attorney Jimmy Lea said Parker built the bomb with items bought at a Wal-Mart in nearby Gallatin, then placed it in a cardboard box he also got from the store.

Lea said Parker wrote a fake address on a FedEx packing slip he got at an office store, then placed it on the package that he put on the couple's porch.

Parker's oldest son was the first person to arrive after the bomb went off.

"He ... essentially saw his grandfather on fire," Lea said. "He was just trying to put the flames out that were on his back and try to get his jacket off of him to put him out."

During Tuesday's hearing, Parker became emotional at times as prosecutors recounted details of the crime. His attorneys, who did not comment, stood on each side of him. Parker seemed to show the most emotion when there was discussion of his mother-in-law. Lea said Parker was holding her in a swing when deputies arrived.

"He actually went into the back bedroom where she was and ... carried her out of the home," Lea said.

Before his arrest, Parker sat for hours at Marion Setzer's bedside along with her other children, said Kevin Ulmet, senior pastor of the Nashville First Church of the Nazarene.

Parker's pastor said there was never any sign of trouble between the son-in-law and the Setzers.

Richard and his wife, Laura, were longtime members of the church, Ulmet said. The Setzers had been members for years before moving to Lebanon, but they still had close ties to the Nashville congregation, he said.

Marianna Rogers, a daughter of the victims, said the family was relying on their faith.

"Our parents tried to share God's love and message of hope. The message they would want us to carry is that nothing, not even death, can stop the love of God," she said.

Parker had been in trouble before. In 1990, he burned down a home that he was supposed to be renovating. In that case, his father-in-law, who concentrated his practice around estates and trusts, helped represent him. Jon Setzer's former law partner said the father-in-law helped because he didn't believe the arson charge was justified.

In that case, Parker served four years of probation and was ordered to pay $40,000 restitution.

While investigating the recent case, Lea said Parker also admitted to writing a $12,000 check he had stolen from his father-in-law's office and cashing it at a local bank.