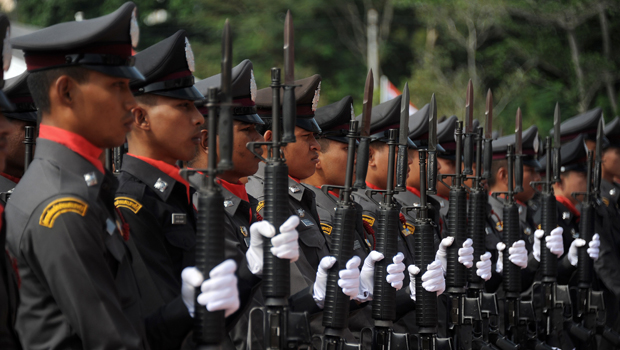 BANGKOK -- Police in Thailand have cracked down on a sex ring that lured underage girls to work as prostitutes whose services were sold to high-ranking military officers, Buddhist monks and a variety of other officials, authorities said Thursday.

Police in the northern city of Chiang Mai, where the network operated, said that 23 suspects were being sought for their alleged involvement in the underage sex ring, which used female procurers to lure girls as young as 13 to city brothels.

In recent days, 12 of the suspects have been arrested or turned themselves in, said Maj. Veerachon Boontawee of Chaing Mai's police anti-human trafficking center.

Among those arrested was the former abbot of a prominent Buddhist monastery and a senior former military officer, Vererachon said.

The vice rector of a Buddhist university in Chiang Mai, who police declined to name, turned himself in on Wednesday, he said. The Bangkok Post newspaper reported Thursday that the university official was accused of having sex with at least five girls, all 13 years old, who were working as prostitutes.

The probe started earlier this year after a 13-year-old girl was rescued from the sex trade and led police to several procurers and clients who were her regular customers, Veerachon said.

Those arrested could face charges of having sex with minors under the age of 15, which carries a penalty of up to 20 years in prison.

Thailand is known for red-light districts in its main cities and beach towns that cater to tourists. Veerachon said that brothels which employ underage girls are usually underground operations that cater to Thai men, while those that lure underage boys are aimed at foreign men.