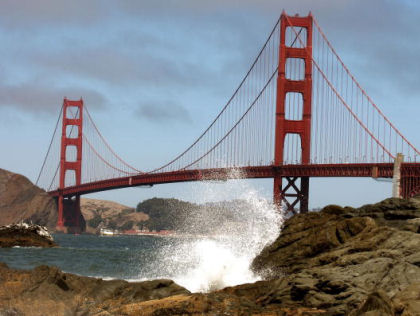 SAN FRANCISCO - Authorities say a 16-year-old high school student is hospitalized after surviving a plunge off the Golden Gate Bridge.

Officials say the student from Windsor High School in Sonoma County was crossing the bridge with a group of other students on a school field trip when he jumped off the bridge about 11 a.m. Thursday.

California Highway Patrol Officer Chris Rardin told KRON-TV that after teen survived the fall, estimated to be about 200 feet, the teen was helped to shore by a surfer.

The teen was taken to San Francisco hospital for treatment of his injuries.

The boy was being evaluated at a San Francisco hospital for injuries, reportedly including a broken tailbone and torn lung, but neither school or fire officials could provide further details on his condition.

It's not clear how badly the boy was hurt, but Rardin says though he was assisted to shore by the surfer, the boy was able to swim on his own.

Windsor Unified School District Superintendent Bill McDermott said he didn't think the boy was trying to commit suicide, but said it was possible he jumped as a result of a dare by fellow classmates; authorities were still investigating what led up to the incident, reports CBS station KPIX in San Francisco.

Officials say about 25 people per year die in jumps from the bridge.