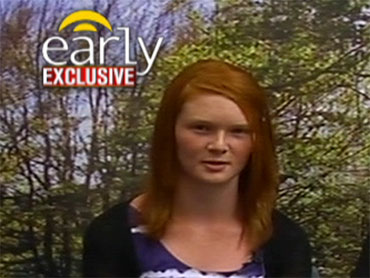 How can you surprise a shark?

Fourteen-year-old Lydia Ward would say you could just give it a good whack with a boogie board.

Why? Because that's just what she did Monday when she felt something latch onto her hip and wouldn't let go.

Lydia was swimming with her 10-year-old brother at Oreti Beach near the southern New Zealand city of Invercargill when she brushed her foot on something in the shallow water.

"I wasn't quite sure what it was," she said on "The Early Show." "I tried to stay afloat, so that it would just pass with the current."

However, the animal didn't float away -- it hung on with its teeth.

Lydia said, "When I put my foot back down, I touched it again and that's when I knew something wasn't right."

She said when she looked back at her brother and saw his shocked face, she looked and saw a massive gray body clamped to her side.

Lydia said she thought "yuck" and began slamming the shark with her only weapon: her boogie board.

As the swimmers paddled back to shore, Lydia said she didn't feel anything.

"It wasn't until I got about knee deep that I realized I had a bite mark through the wet suit," she told "Early Show" co-anchor Maggie Rodriguez.

A closer inspection revealed nearly a dozen holes pierced the side of her suit.

Tim Ward, Lydia's father, said his daughter and son were very calm when they came ashore.

"There was no fuss. There was no shouting or waving of arms or anything," he said. "I didn't think there was anything going on. Lydia came right up to where I was on the edge of the water, and said that something had bitten her and showed me the side of her wet suit, and thought, that wet suit is just pierced, but then I noticed there was blood trickling down the back of her leg from the wet suit."

Lydia went to the hospital, but has since been told she'll be fine.

But will she be fine going back into the water?

Lydia said she knows it was a freak accident, and plans to go back in "after a while."