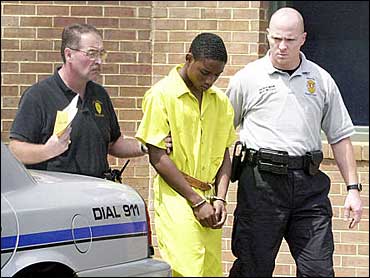 A teenager was charged Monday with three counts of murder for allegedly shooting two police officers and a dispatcher, then fleeing in a cruiser, as they tried to book him for car theft.

Devin Moore, 18, was captured nearly four hours later after shooting the three Saturday in this rural community of about 5,000 people. He remained in jail without bond and faces a possible death penalty if convicted.

Moore, who had just graduated from high school and was about to join the Air Force, allegedly took one of the officer's guns, shot all three at the Fayette police station and fled, prosecutors said. He was captured in Mississippi, about 12 miles west of the Alabama line.

A public defender for Moore had not yet been assigned.

Moore's father, 48-year-old Kenneth Moore, said after the hearing that had trouble disciplining his son for years and that his son deserved to be charged with capital murder.

"You live by the sword you die by it, that's the Bible," said Moore's father, 48-year-old Kenneth Moore. "God works in mysterious ways."