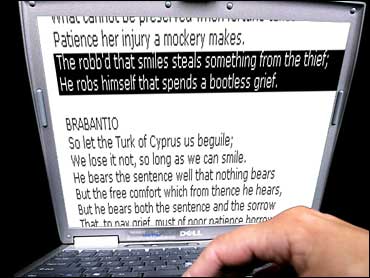 His computer was telling him that 42 percent of a student's research paper contained wording "similar" to information on the Internet, or to other student papers. It needed a closer look.

Davids, an assistant dean at Regent University, had just begun wading through 35 papers from his graduate-level Constitutional Law II class.

One of his first steps these days is to run some of the papers through a software program designed to detect stolen writings and ideas.

Plagiarism detection programs have become increasingly popular on college campuses now that Internet research has become standard and students have discovered the ease of cutting and pasting information.

The Center for Academic Integrity at Duke University reported that 10 percent of students surveyed in 1999 admitted doing so without properly crediting the source. By 2005, the percentage was almost 40 percent. And 77 percent said they didn't think such cheating was a serious issue.

A mouse click from Davids eliminated matches on the student paper that used quotation marks — those were legitimate. That dropped the "similar" wording to 13 percent.

Plagiarism on campus grabbed the state's attention in 2001 when a University of Virginia physics professor, acting on a tip, checked student papers using a homemade computer program. The school eventually charged 158 students with plagiarism.

Nineteen months later, 20 students had been found guilty of honor violations and kicked out, another 28 admitted guilt and left the school on their own, and 90 students were exonerated. The rest received lesser punishments or treatment, such as counseling, the university reported.

Until a couple of years ago, Regent professors might have checked suspicious passages using the search engine Google, by poring through professional journals, or not at all.

They since have joined Old Dominion University and Virginia Wesleyan College in using such software to help detect plagiarism. One of the most popular software programs, Turnitin, is used by thousands of colleges and high schools in more than 90 countries, according to its Web site.

It doesn't determine plagiarism — that's still for professors to decide. Was the copied work an intentional act or a sloppy one, the more common fault?

But it compares student writings with billions of documents — Internet, professional journals, Turnitin's database of other student papers — and highlights matching passages and provides the sources. Each check can take minutes up to a couple of hours, depending on traffic.

One of Davids' past students, a lover of long paragraphs, turned in a paper that was suspiciously easier to read than past ones. It reminded Davids of The Chronicle of Higher Education. A check showed an 83 percent match with writing in that journal.

And one student paper scored 100 percent — she had put her name on another student's paper that happened to be in the database. A repeat offender, she was kicked out, said Bruce Winston, dean of the School of Global Leadership & Entrepreneurship.

"If Turnitin finds it, Turnitin always wins," he tells students. "That was one student out of thousands out of 10 years of doctoral students."

It also works the other way: Winston said a check prevented him from accusing a student who turned in a seemingly too-good-to-be-true paper. Davids, who's working on his doctorate, said he runs his own work through the program to make sure he's not inadvertently breaking attribution rules.

Regent students — even some who didn't realize their professors had such tools — didn't seem to mind. They cited examples of plagiarism at their previous schools — including one where the student didn't bother to change the first-person tense of the stolen writing.

"I've always been taught that your ideas or others' ideas are as much your property as your car," said Chuck Slemp, a dual graduate and law student from Pennington Gap.

Students who take shortcuts, "when they go out in the marketplace, they devalue my degree," said Stephen Raper of Chesapeake, a graduate student.

Still looking at the electronic report on his student's paper, Davids saw that, not surprisingly for a government class, most of the remaining matches were proper names of people or laws. No problems there.

But one sentence still stuck out.

So he'll probably send her the report with a reminder: "Be diligent."