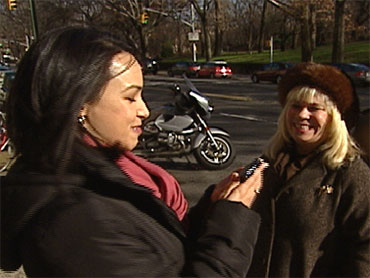 Have you ever misplaced your cell phone and wished finding it was as simple as making a telephone call?

Now there's new technology that claims to do just that.

There are eight to 10 million phones lost in the U.S. every year. Now, new software can help increase the chances of getting your phone back, with a little luck and help from some Good Samaritans.

Would she ever see the phone again?

A few minutes after leaving the phone in the cab, Del Conte tracked the phone online using the GPS feature, available with both Apple and Microsoft phones.

She tracked the phone as far as Midtown Manhattan.

However, before she lost the signal for good, Del Conte used some special phone features to get the word out that this phone belonged to her.

But she left the phone on silent. What to do?

Del Conte said there's a function that will let the phone ring -- even when it's in silent mode. Microsoft's MyPhone Web site, she said, can ring the phone continuously for 60 seconds at a time. It can also allow you to lock the phone remotely, and type in a personalized message, such as instructions on how to return the phone.

For 30 minutes, Del Conte kept ringing the phone, then lost the signal in Midtown, receiving the message: "We were unable to locate your phone."

However, three hours after the search began, Del Conte got a message from Kim Aguero. She found the phone in Midtown.

Aguero said the message from Del Conte saying, "If found, call Natali" was what prompted her to get in touch with Del Conte.

Del Conte added on "The Early Show" that smartphones from Apple and Windows have this technology -- not standard-issue cell phones. On Windows phones, the service costs $5, but you only pay when you need it. iPhone users pay $100 per year for a back-up program that includes this service. And, if worse comes to worst, Del Conte said, and you don't get your phone back, this software also can wipe all the data off the phone such as your contacts and messages.

Aguero told Del Conte this technology would be useful to her because someone once found her lost phone and made obscene phone calls to everyone on her contact list.