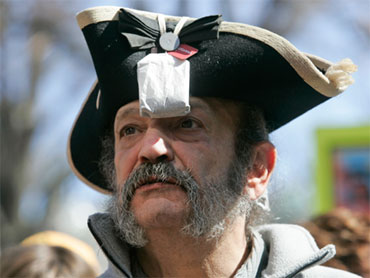 The National Tea Party Unity Convention is no more.

Organizer Barbee Kinnison emailed supporters with "deep sorrow" to announce that the convention, which was to take place in Las Vegas in October, had been cancelled, the New York Times reports.

During the past week, TPMDC and blogger Raven Brooks reported that the event appeared to be canceled, since the event's website had been removed and the hotel meant to be hosting it said it was no longer taking place.

The convention was originally scheduled to take place in July, with Lou Dobbs and Andrew Breitbart among the announced speakers, before being postponed until October. (Organizers cited the Nevada summer heat for the decision.) It was meant to be a follow up to the National Tea Party Convention in Nashville in February, whereSarah Palin was the keynote speaker.

The group that was organizing the rally, Tea Party Nation, has long been viewed with suspicion by other Tea Party groups. Many grumbled at the $549 cost to attend the Nashville event, accusing the group of potential "profiteering and exploitation of the grass-roots [Tea Party] movement." The Las Vegas convention was meant to stress unity in the movement in the state where Tea Party-backed GOP Senate candidate Sharron Angle is locked in a nasty and tight campaign battle with Senate Majority Leader Harry Reid.

In her email, the Times reports, Kinnison wrote that members of the movement should remain enthusiastic.

"When November rolls around, I am begging everyone I can to vote! We are the only ones who know what the real world is like," she wrote. "Let's put this pompous and impervious collection of Congressional men and women out of work!"

Brian Montopoli is a political reporter for CBSNews.com. You can read more of his posts here. Follow Hotsheet on Facebook and Twitter.
View CBS News In
CBS News App Open
Chrome Safari Continue
Be the first to know
Get browser notifications for breaking news, live events, and exclusive reporting.