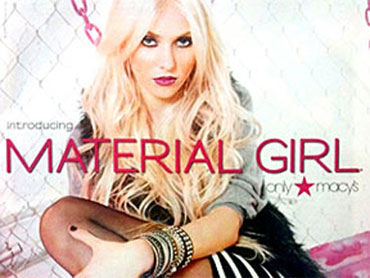 The actress, who plays good-girl-gone-bad Jenny Humphrey on the CW series, has been revealed as the face of Material Girl, the juniors clothing line for Macy's co-designed by Madonna and her 13-year-old daughter, Lourdes Leon.

A promotional image for the line shows Momsen in a striped skirt and gray top, complete with leather boots and loads of silver bangles.

Momsen's grungy, rocker style seems to fit the clothes, but the 16-year-old actress is often photographed smoking cigarettes and has said she has no intention of wanting to be a role model for her fans and some have wondered whether critics will protest her appointment as the face of a tween-oriented line.

Leon, who has become a budding fashionista as she's grown up and even blogged about her love for vintage shops, Oxford shoes and '80s fashion on the clothing line's website, could easily have modeled the line herself. Maybe her famous mother said no to going in front of the camera?

The Material Girl collection will be available at Macy's stores beginning Aug. 3.