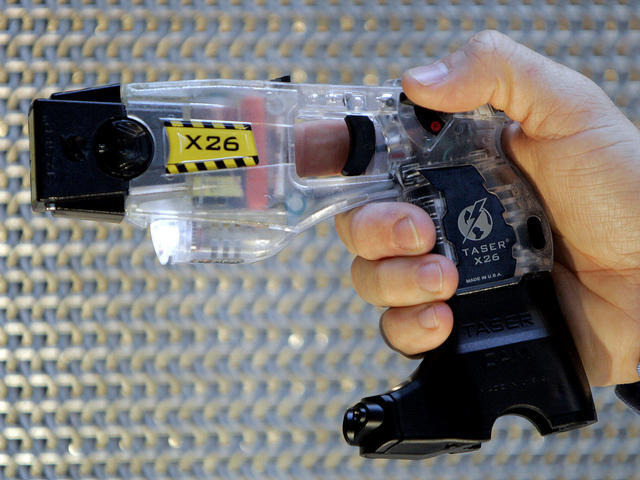 Although many studies have shown over the years that TASER guns used by law enforcement agencies are safe to use on combative suspects, a new report reveals that these electrical stun may not be as safe as you'd think.

A group of cardiologists from the University of California, San Francisco, have released findings that suggest much of the current TASER-related safety research may be biased due to ties to the devices' manufacturer, TASER International.

"We noticed that a majority of the studies out there about the safety of TASERS have been funded by companies that make them or involve people affiliated with those manufacturers," said senior author Byron K. Lee, associate professor of medicine in UCSF's cardiology division. "We looked into this more and discovered that TASERS might be more harmful than the studies are revealing."

The devices, also marketed for home use, deliver electrical pulses that stimulate the nervous system and cause involuntary muscle contractions.

Advocates of using such conductive energy devices, or CEDs, say that they are effective and cause only temporary physical symptoms. Critics and scientists have raised concerns about the potential dangers of using TASER devices, particularly on pregnant women, the elderly and very young, and individuals with underlying medical conditions.

The UCSF team analyzed 50 studies about the product safety of the TASER and concluded that the likelihood of them being called safe was 75 percent higher when the studies were either funded by the manufacturer or written by authors affiliated with the company than when studies were conducted independently.

Of the 50 articles studied, 23 were funded by TASER International or written by an author affiliated with the company. Nearly all (96 percent) of the TASER-supported articles concluded the devices were either "unlikely harmful" (26 percent) or "not harmful" (70 percent).

In contrast, of the 27 studies not affiliated with TASER Internationall, 55 percent found that the devices are either "unlikely harmful" (29 percent) or "not harmful" (26 percent).

"It's evident that more studies from independent parties need to be done to uncover the true effects of TASERS," Lee said. "In some cases, they cause cardiac arrest and sudden death, so they aren't completely safe."

Despite these claims, TASER International is standing by the accuracy of its studies.

"Many of our TASER-funded studies were repeated by independent groups, such as University of California and Wake Forest University, that have received funding from other sources, including the United States Department of Justice, and have validated our results which directly refute any claim of bias," Steve Tuttle, vice president of communications for TASER International, told TechNewsDaily.

Tuttle also noted that the bulk of TASER-funded research went through the Hennepin County Medical Center and the Minneapolis Medical Research Foundation, noting that it was accomplished by contractual grant, which means it must go through an oversight body and is often peer reviewed.

"Numerous studies funded by TASER and several funded by other sources, such as the United States Department of Justice, received very high grades in terms of relevance, validity and methodology," Tuttle said. "This is as stringent a peer review process as one could hope for."

In recent years, the media has made light of the use of TASERS. In 2007, the stun gun was used on a University of Florida student and arrested after causing a disturbance at a town hall forum, which featured Sen. John Kerry. The incident was captured on YouTube and millions watched the victim tell the officer, "Don't TASE me, bro." This now-famous phrase made its way across the Internet and even showed up on T-shirts.

TASERS have also shown up in unlikely places. Some people have held TASER parties instead of traditional Tupperware parties to buy TASERS to protect themselves at home.

In addition, a police officer played by actor Rob Riggle in the film "The Hangover" gets big laughs when he teaches a classroom of kids how to use TASERS by demonstrating several times on his friends.

"TASERS should never be used recreationally," Lee said. "They are less dangerous than a law enforcement officer shooting someone, but they can still cause a lot of harm and in even some cases, kill someone."