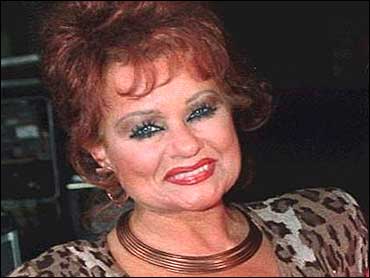 Former televangelist Tammy Faye Messner has announced that she has inoperable lung cancer.

Messner, 62, told one caller to the CNN program "Larry King Live" that she "believes in miracles" and told another that she is considering holistic medicine in addition to chemotherapy to treat her cancer.

"They can't take it out, because it's too near the heart and there are too many blood vessels that are close to the cancer."

The former Tammy Faye Bakker divorced televangelist Jim Bakker in 1992 while he was serving a sentence for financial fraud. The two met, and married, while at North Central Bible College in 1961, which forced them to drop out: The school had a strict policy against married students.

After being introduced to Pat Robertson, founder of the Christian Broadcasting Network, they began hosting CBN's "The 700 Club" in 1966. It became the prototype of modern television ministry.

They left CBN in 1973, and the following year, took over another Christian television show, which they renamed The PTL Club, for "Praise The Lord." That was so successful the Bakkers were able to establish an entire Christian television network called the PTL or Inspirational Network, and to finance a 2,300-acre Christian theme park, Heritage U.S.A.

Their empire began to unravel in 1980 when Jim's adulterous affair with church secretary Jessica Hahn became known. With additional evidence of his sexual escapades, he was stripped of his ministerial credentials, and, following a FCC investigation into the financial activities of the PTL network, he was convicted in 1989 of fraud and conspiracy.

The couple divorced in 1992. The following year, she married Roe Messner, a family friend and business associate of the Bakkers.

Messner has a self-help book "I Will Survive ... And You Will, Too!" that was released last year before she was diagnosed. Her autobiography, "Tammy: Telling It My Way" was released in 1996.

She recently appeared on the WB reality show "The Surreal Life," costarring with former rapper Vanilla Ice, ex-porn star Ron Jeremy and others.

"A woman is so vain!" she laughed. "And the first thing they think about, 'Oh, no, I just got my hair right, got the highlights just right, and now I'm going to lose it all.'"