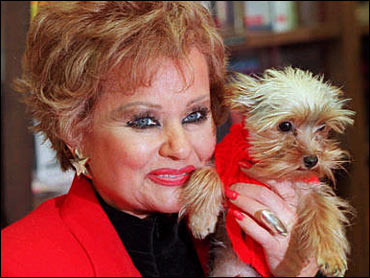 Former televangelist Tammy Faye Messner said doctors have stopped treating her cancer and that her weight has dropped to 65 pounds.

In a letter posted Tuesday on her Web site, Messner thanked her "faithful friends" for sending her flowers, cards and gifts as she battles cancer for a third time. The 65-year-old Charlotte resident was first diagnosed with colon cancer in 1996, and she announced in 2004 that the disease had spread to her lungs.

"The doctors have stopped trying to treat the cancer and so now it's up to God and my faith. And that's enough!" she wrote.

Messner said her daughter and her daughter's friends were taking care of her while her husband, Roe Messner, builds churches. He had no comment on his wife's condition, said a woman who answered the phone Wednesday at his business.

Messner has frequently spoken about her medical problems, saying she hoped to be an inspiration to others. Letters, including updates on her health, have been posted every few months on her Web site.

"I am down weight-wise to 65 pounds, and look like a scarecrow. I need God's miracle to swallow," she said in her latest posting. "I look at young people and wish with all my heart for just one day of 'feeling great.' "

Messner divorced Jim Bakker in 1992, while he was serving a sentence for financial fraud. The pair founded a Christian retreat in Fort Mill, S.C., and built a multimillion-dollar evangelism empire.