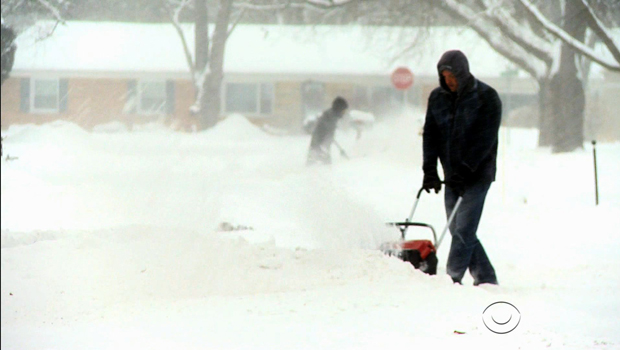 "We just had water coming down through this whole front area," said Alison Anderson, the store manager. "They were at the front of the building, by the door here, so the cold weather was definitely the reason.

It happened at the worst possible time for a store full of warm jackets for sale.

The economic disruption from the cold could be felt at Chicago's Burnham Hotel, where cancellations piled up like drifting snow. Nabil Moubayed oversees the hotel.

"We have three hotels in the Chicago loop and most of them were running somewhere between 20 and 40 percent," Moubayed said.

Add lost productivity from people stranded miles from their desk to lost wages from workers told to stay home and economic growth may have lost two-tenths of a percent.

"We're looking at probably a $5 billion impact," she said. "A lot of that is due to the sheer size of area that's impacted."

But cooped up consumers were actually good things like e-commerce.

And auto-repair shops were doing a bang-up business. Sales of shovels, salt and snowblowers were hot, according to Ace Hardware's Jeremy Melnick.

"Obviously with the snow and the cold weather, things were flying out the door pretty fast," Melnick said.

But retailers are a bit concerned about the coming weeks when homeowners begin getting high energy bills. Businesses expect that could hurt sales around Presidents' Day.

Customers step up to save beloved general store
Dean Reynolds