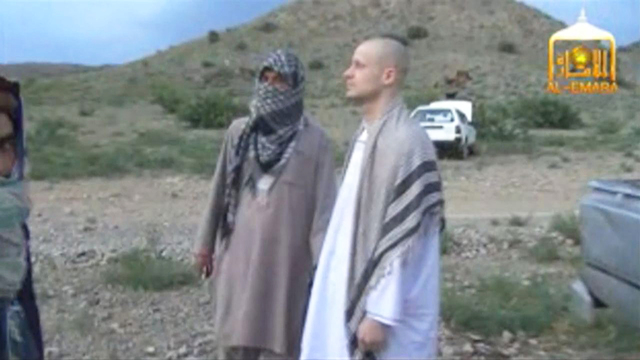 WASHINGTON - The Obama administration has told senators it didn't notify Congress about the pending swap of Sgt. Bowe Bergdahl for five Taliban officials because the Taliban had threatened to kill him if the deal was made public, three congressional officials have told The Associated Press.

The threat, - not just concerns that Bergdahl's health might be failing - drove the Obama administration to quickly make the deal to rescue him, the officials said Thursday. The threat was transmitted by Qatari officials at the height of the negotiations, they said.

Defense Secretary Chuck Hagel was referring in part to the threat when he said Sunday that "there was a question about his safety," the officials told the senators in a closed-door briefing on Wednesday.

Sen. Angus King, I-Maine, later told reporters Thursday afternoon, "They had credible information that if the fact of the negotiations leaked out that there was a danger that he would be killed and that was one of the reasons they held it so close both within the administration and with Congress."

The latest explanation comes as several administration and congressional officials say that a December video shown to senators in the briefing portrayed Bergdahl's health as in decline but not so severe that he required an emergency rescue. An assessment by U.S. intelligence agencies in January came to the same conclusion, said two congressional officials familiar with it.

The congressional officials were briefed by the administration but spoke only on condition of anonymity because they were not authorized to discuss the matter publicly.

Caitlin Hayden, spokeswoman for the National Security Council, disputed the characterization of what the administration had told senators but did not provide details on what the briefing entailed.

"Our judgment is that every day Sgt. Bergdahl was a prisoner his life was at risk, and in the video we received in January he did not look well. So when presented with a near-term opportunity to recover Sgt. Bergdahl and save his life, the president chose to act," Hayden said in an email.

As for the earlier video, Pentagon officials did not conclude that it suggested that time was running out, a Pentagon official familiar with the Bergdahl case said, speaking on condition of anonymity because he was not authorized to publicly discuss the case.

Sen. Saxby Chambliss, R-Ga., said after the briefing Wednesday night that Bergdahl appeared drugged but not at imminent risk of death. Various officials who saw the video noted that the soldier had lost weight.

U.S. officials continued to cite the health issue Thursday, including President Barack Obama, who said at a news conference in Brussels: "We had a prisoner of war whose health had deteriorated and we were deeply concerned about. And we saw an opportunity and we seized it. And I make no apologies for that."

A Pentagon spokesman, Army Col. Steve Warren, said, "The decision to recover him was made based on the assessment that we were running out of time." Pressed to explain further, he added, "The assessment was that his health and safety were at such a risk level that we needed to act quickly."

A spokesman for James Clapper, the director of national intelligence, said in a statement Wednesday that three factors led Clapper to support swapping Bergdahl for the five Taliban men.

"The first was evidence that Sergeant Bergdahl's health was deteriorating and that he may be in need of medical attention," spokesman Shawn Turner said. "Second was the fact that, as we draw down our forces in Afghanistan, we will have fewer resources available to dedicate to his recovery. Lastly, that the DNI was satisfied with the assurances from the Qatari government that these five individuals will be closely monitored and subject to travel restrictions."