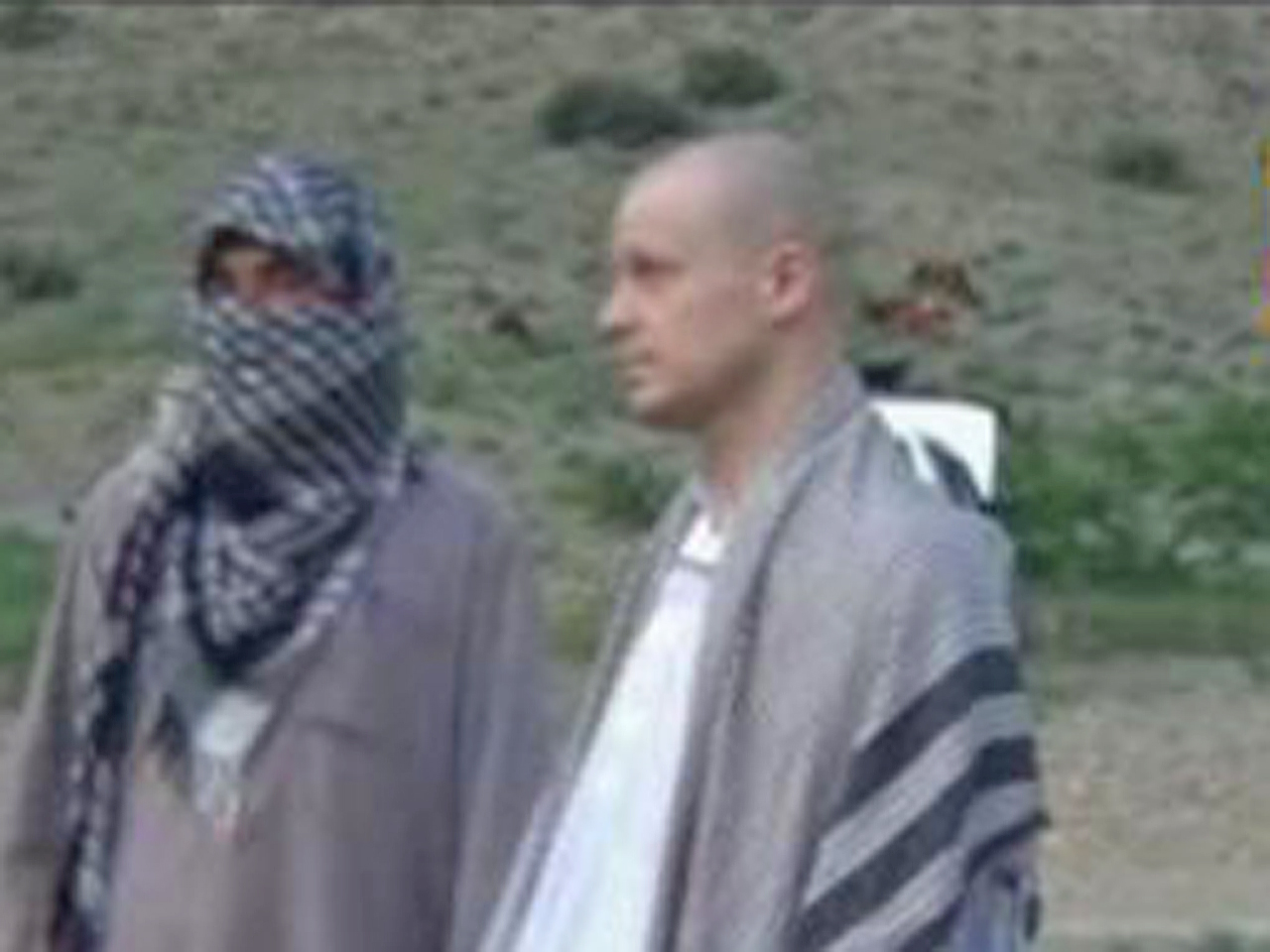 The video posted to the Taliban's primary propaganda website shows Bergdahl, wearing traditional Afghan clothing, sitting in a pickup truck parked in a hilly area. More than a dozen armed Taliban fighters stand around the truck and dot the hillside.

Bergdahl is seen blinking frequently, which CBS News consultant Jere Van Dyk, who was himself held by the Taliban for 45 days, said was likely because he'd been held in a dark place or blindfolded for a long period.

Van Dky said that from the encounters Bergdahl had with his captors during the handover, it seemed that he had not become "their friend or close to them."

"The main captor is lecturing him right up to the end. Bowe is trying to be friendly -- you always are because you want them to like you, and not kill you," said Van Dyk.

A Black Hawk helicopter then lands at the site and two Taliban militants, one carrying a crude white flag tied to the end of a stick or rifle, lead Bergdahl toward it. They're greeted by three Western-looking men in civilian clothing to the helicopter, where soldiers in military uniforms are waiting.

"This is a very dangerous moment," said Van Dyk. "You don't know if they are going to kill you and the American soldiers or what. My captors told me they were sending a suicide bomber to the release."

But the helicopter quickly takes off, carrying Bergdahl and his rescuers. As it departs, a message flashes up on the screen in English, reading, "Don' come back to afghanistan (sic)."

"They told me the same thing," recalled Van Dyk. "'Don't come back to Afghanistan...' that is their message, to him and to us."

The National Security Council (NSC) told CBS News in a written statement, "we have no reason to doubt the video's authenticity, but we are reviewing it."

After five years in captivity, Bergdahl was freed on Saturday in a prisoner swap for five Taliban detainees who were being held at the U.S. military detention facility in Guantanamo Bay, Cuba.

Bergdahl, 28, is currently at U.S. military hospital in Germany, where he is undergoing a battery of mental and physical health checks. Van Dyk says that as soon as the U.S. military established his well-being, they would have begun hours of debriefing by intelligence agents eager to learn anything they can from him about his captors.

The prisoner swap that won his release has become highly controversial in the United States, with critics saying Bergdahl may have deserted his unit before being captured. Others charge the Obama administration broke the law by failing to notify Congress soon enough about the possible exchange.

The NCS said in a statement Tuesday that time constraints made it impossible for the administration to notify Congress of the swap beforehand, as required by law.

Others worry the administration set a bad precedent by negotiating with a terror group, and gave up too much in the deal.

But the administration has staunchly defended the decision, with President Obama himself saying Tuesday that his first responsibility was to bring the U.S. service member home.

"Regardless of the circumstances," said Mr. Obama, "we still get an American soldier back." He said that was "what every mom and dad who has a son or daughter sent over to the theater of war should expect."

President Obama said the decision to move ahead with a negotiated prisoner swap was made swiftly because "we were concerned about Sgt. Bergdahl's health."

Mr. Obama said the process to secure the American's release was "truncated because we wanted to make sure we didn't miss that window," indicating a deal was on the table but might not have been for long. He said his administration believed the deal represented the best and possible last opportunity to get Bergdahl away from his captors.

Some Republican lawmakers, however, have urged a congressional investigation into the administration's actions.

"There has not been even the weakest case, in my opinion, made that he was suffering from a health standpoint, to the degree to which a decision had to be made immediately," Senate Select Intelligence committee vice chairman Sen. Saxby Chambliss (R-GA), said Tuesday.

The Wall Street Journal reported Wednesday that a series of secret videos provided to U.S. intelligence agents by the Taliban between 2011 and 2013 showed his health deteriorating at an "alarming" rate. According to the report, intelligence officials believed Bergdahl was likely suffering from at least one of several specific ailments, but what those ailments were remains unclear.

U.S. military officials have not said what Bergdahl is being treated for at the U.S. base in Landstuhl, Germany. They've given no specifics on his condition since he arrived there.