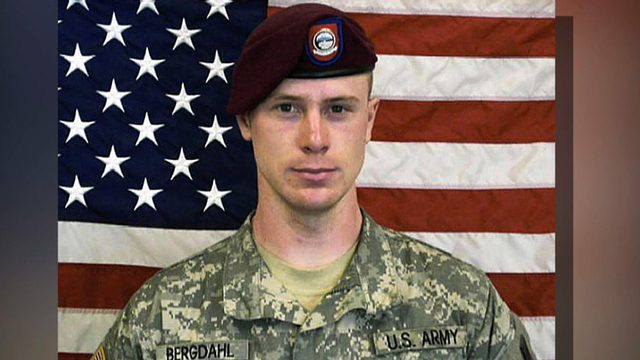 BRUSSELS -- The Army may still pursue an investigation that could lead to desertion or other charges against Sgt. Bowe Bergdahl, who was freed from five years of Taliban captivity in a prisoner exchange last weekend, Gen. Martin Dempsey, chairman of the Joint Chiefs of Staff said Tuesday.

Dempsey also told The Associated Press in a telephone interview from his plane that Bergdahl's next promotion to staff sergeant, which was set to happen soon, is no longer automatic because Bergdahl isn't missing in action any longer.

Speaking publicly for the first time about the case, Dempsey said he does not want to prejudge the outcome of any investigation or say anything that might influence a commander's decision.

But he said U.S. military leaders "have been accused of looking away from misconduct, and it's premature" to assume they would do so in Bergdahl's case, despite the soldier's five years as a Taliban prisoner.

On his Facebook page, Dempsey wrote that "this was likely the last, best opportunity to free" Bergdahl.

"As for the circumstances of his capture, when he is able to provide them, we'll learn the facts," Dempsey wrote. "Like any American, he is innocent until proven guilty."

Bergdahl was handed over to U.S. Army special forces Saturday in exchange for the release of five detainees at the Guantanamo Bay, Cuba detention facility.

It is widely believed that Bergdahl walked off the base where he was stationed in Afghanistan in 2009. CBS News' David Martin reports that one Pentagon official described him as "at worst, a deserter. At best, a stupid kid who caused us to expend great energy and resources to bring him home."

Service members who are missing in action routinely continue to be promoted on the same schedule as their peers. But, Dempsey said, "his status has now changed, and therefore the requirements for promotion are more consistent with normal duty status." As a result, he said, other things needed for promotion, such as proper levels of education and job performance, would now apply. That makes Bergdahl's promotion less automatic.

There are a variety of offenses related to an absence without proper approval, and a number of potential actions could be taken by the military. He could be tried by court martial under the Uniform Code of Military Justice for desertion; he could be given a non-judicial punishment for a lesser charge, such as being away without leave. And he could be given credit for time already served while he was a prisoner.

Dempsey stressed that any decision would be up to the Army.

He said he has not yet spoken to Bergdahl or his parents since the release, noting that medical personnel want him to come to grips first with his new freedom and status.

Members of Bergdahl's unit and military officials have complained that Bergdahl's decision to leave his base unarmed put his fellow soldiers in danger and that some were killed in missions that included looking for him.

Former members of Bergdahl's unit have taken to the airwaves and social media calling him a deserter and alleging other soldiers were actually killed searching for him.

Josh Korder, a former sergeant in Bergdahl's unit, has the names of those soldiers tattooed on his body.

"They were never nationally televised for their sacrifices in the way that he is and he pretty much voluntarily walked away and in turn, caused, you know, the actions that may have killed them," Korder told CNN.

Nathan Bradley Bethea, who served as an officer in Bergdahl's unit, said in an article Monday on the Daily Beast website that Bergdahl was not on patrol, as some reports have suggested.

"There was no patrol that night," he wrote. "Bergdahl was relieved from guard duty, and instead of going to sleep, he fled the outpost on foot. He deserted. I've talked to members of Bergdahl's platoon - including the last Americans to see him before his capture. I've reviewed the relevant documents. That's what happened."

In his piece, Bethea named six American soldiers he said were killed in the search for Bergdahl.

"For the veterans of the units that lost these men, Bergdahl's capture and the subsequent hunt for him will forever tie to their memories, and to a time in their lives that will define them as people," Bethea wrote. "He has finally returned. Those men will never have the opportunity."