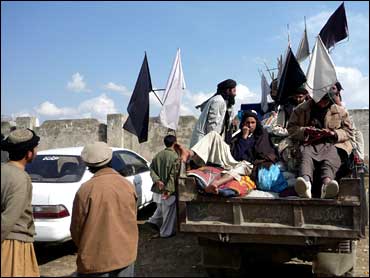 The fight against the Taliban just got a lot more difficult.

This week, Pakistan's president signed a deal that imposes Islamic law in the northwest corner of his country. It's the latest sign that the Taliban is taking over a large part of Pakistan, as CBS News correspondent Elizabeth Palmer reports.

The Taliban has been holding victory parades - convoys to declare that they're back in control. But this isn't happening in Afghanistan - the country most associated with the Taliban - but next door, in Pakistan.

They've brought with them their harsh interpretation of Islamic justice, including public floggings. Recent disturbing images show a teenage girl - accused of adultery - being beaten by local men.

The Pakistani authorities can do nothing. In February, they ceded control of the area to Taliban fighters. Now police stations and army posts lie in ruins.

It was a humiliating surrender of key territory, known as the Swat Valley. Now Washington worries it will become a militant stronghold for attacking U.S. positions in Afghanistan.

Families who fled during the fighting are coming back to a hard life under new masters.

It's an ugly development - and one Pakistan's president is reluctant to recognize.

"The Taliban are not going to be in control of any part of my country," said Pakistani President Ali Asif Zardari.

But they already are: digging into Swat, dismantling roadblocks they'd built to keep Pakistani troops out, and setting up their headquarters.

"Swat has shown people that you can move into an area of a large country that is poorly governed and you can pretty much take over by intimidation and threatening people and killing people," said Frederick Barton, of the Center for Strategic and International Studies.

The new stronghold is becoming a potent symbol for Islamic militants in the region hoping to expand their operations.