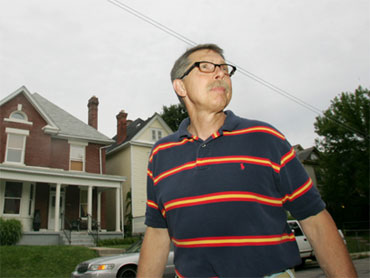 (AP Photo/Paul Vernon)
Richard Vickers checks on an abandoned property that has a pair of shoes hanging from the utility lines out front as he patrols his Old Oaks neighborhood, Aug. 4, 2009 in Columbus, Ohio.

COLUMBUS, Ohio (AP) Cruise down the tree-lined streets of the Old Oaks neighborhood on a summer evening and know this: Someone is watching you.

It might be Richard Vickers, who records your license plate number in a notebook as he retrieves gun shell casings from the sidewalk while out on his nightly walk. Or it might be Doug Motz, who alerts via text message: "Watch out for the green van lurking in the alley."

Like the members of this well-oiled block watch group in central Ohio, neighbors across the country are using Twitter, blogs, e-mail and street patrols to help thwart crime. While some groups form after break-ins or muggings, there are signs of increased interest as law enforcement agencies are strained by layoffs and furloughs amid ballooning budget deficits.

"This is our neighborhood," says Vickers, a lawyer who moonlights as block watch captain. "Why should we allow people to force us out of here?"

"There's a big push on to learn how to do it and how to get people involved," says Tutko, who trains law enforcers in running watch groups.

In most cities, wannabe block watch members must be trained by police in how to identify and respond to criminal behavior. The first step seems almost quaint: Talk to your neighbors, police say.

After a string of kidnappings and home invasions in Atlanta last year, indignant residents founded Safe Atlanta For Everyone, which coordinates a watch network on the city's east side. Their efforts took on new urgency when the financially strapped city ordered furloughs from December to July, forcing police and other municipal workers to take eight more hours off every week.

Block watch members tweet a constant stream of crime alerts to a privacy-protected Twitter address. One of the group's founders, Donna Williamson, sets out on foot during her lunch break with a cell phone and camera in search of what she calls "Twitter-worthy" behavior.

Vigilance wasn't enough for residents of Kirkwood, a middle-class Atlanta neighborhood. Two years ago they pooled their money to form the Kirkwood Security Patrol and hired an off-duty police officer to roam the streets in an unmarked car.

"If there's been an area where there's been a lot of car break-ins, he'll go and do a stakeout to see if he can catch anybody," resident Emily Gest says.

"You have a right to observe what's going on in the street, but that doesn't give you a right to go peer in your neighbor's window," Davis says.

In rare cases, neighborly advances can end in violence. Near Salt Lake City, a neighbor was shot and paralyzed while driving around looking for thieves on July 22 after several car break-ins in rural Bluffdale, Salt Lake County Sheriff's Lt. Don Hutson said.

Twenty new block watch groups have sprouted since January in Columbus, where police Chief Walter Distelzweig had warned that as many as 300 officers could be laid off if a proposed citywide income tax increase failed. The levy passed Aug. 4.

Anticipating a greater need for community involvement because of budget cuts, the Florida Crime Prevention Association says it has stepped up block watch training for law enforcement agencies to go out and train the public.

"I think the real question is what kind of community does one want to live in," he says. 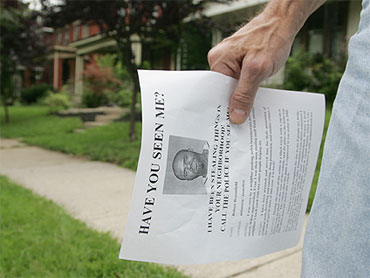 (AP Photo/Paul Vernon)
Photo: Richard Vickers carries a flier with information about a man that is suspected of burglary in the neighborhood.

Four years ago, when the Old Oaks block watch was in its infancy, the crack of gunshots could be heard frequently in the neighborhood of brick homes with front porches on the outskirts of a crime-ridden part of Columbus. Now the streets are quieter, and crime mostly amounts to break-ins.

"Suppose you hear a gunshot somewhere in the neighborhood but you don't know where it came from," Latricia Sparks said. "I might call Dick: 'Did you hear that?' And we all — at the same time — we call the police. Because the more police calls, the faster the response."