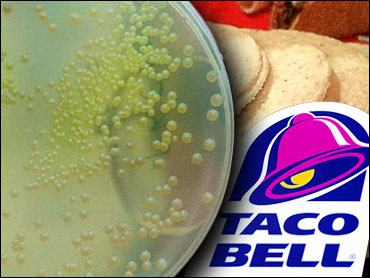 The threat of more E. coli infections linked to Taco Bell restaurants appears to have passed, a health official said, as the company prepared Tuesday to reopen the affected eateries.

At least three dozen people were stricken in New Jersey and New York and apparently all the victims had eaten at Taco Bell restaurants.

"We expect all Taco Bell restaurants to be back in operation today," Tim Jerzyk, a vice president at Yum Brands Inc., parent of Taco Bell, told the company's annual investor conference Tuesday in New York.

New Jersey's top health official described the spate of E. coli sickness as "a serious outbreak," but said Monday the threat seemed to have passed.

"There has not been an outbreak since Nov. 29, so I think that whatever happened went through already," Health and Senior Services Commissioner Fred M. Jacobs said Monday.

E. coli, or Escherichia coli, is a common and ordinarily harmless bacteria, but certain strains can cause abdominal cramps, fever, bloody diarrhea, kidney failure, blindness, paralysis, even death. It is most often spread through contaminated food.

Medical officials in New Jersey and New York were working with the federal Centers for Disease Control and Prevention to try to locate the source of the outbreak that sickened at least 22 people in New Jersey — two of them seriously — and more than a dozen on New York's Long Island.

There are 204 Taco Bell restaurants in New York State, and 86 in New Jersey.

Nassau County Executive Tom Suozzi said the closures of the restaurants had been sought "out of an abundance of caution," reports CBS station WCBS-TV in New York.

All of those who fell ill in New Jersey had eaten at Taco Bells between Nov. 17 and Nov. 28, authorities said.

All but four of the New Jersey victims are under 18, authorities said. Two employees of the chain also tested positive for the bacteria but they were not sickened.

Five were in the hospital Monday, including a 10-year-old boy and a 5-year-old girl who were diagnosed with hemolytic uremic syndrome, which can permanently damage the kidneys, officials said. The boy was in serious condition, while the girl's status had improved to stable, said Stephanie Brown, the Middlesex County epidemiologist.

E. coli is found in the feces of humans and livestock. Most E. coli infections are associated with undercooked meat. The bacteria also can be found on sprouts or leafy vegetables such as spinach.

Earlier this year, three people died and more than 200 fell ill from an outbreak that was traced to packaged spinach grown in California. The bacteria also can be passed from person to person if they do not thoroughly wash their hands after going to the bathroom.