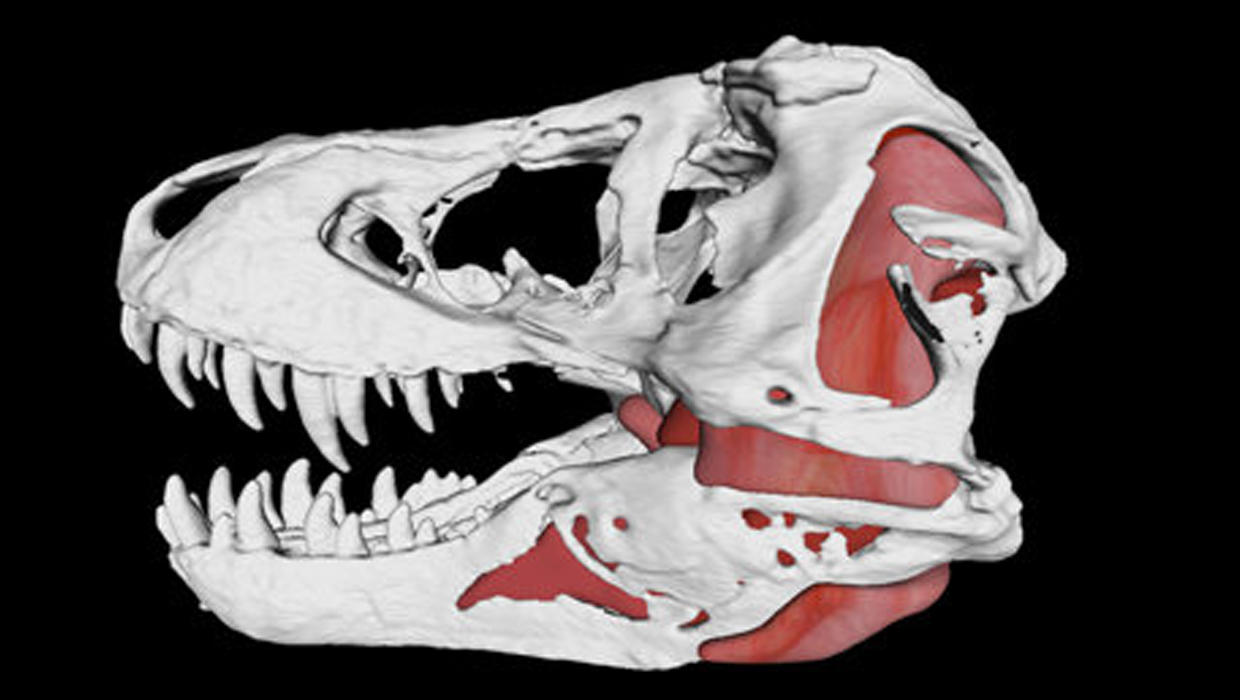 Tyrannosaurus rex could gnash and chomp its teeth together with such force that it could easily pulverize the bones of its prey, a new study finds.

The king of dinosaurs could bite down with a force of 7,800 pounds-force (34,522 newtons), a force equal to the weight of three small cars, the researchers found.

But the real damage T. rex inflicted came from its teeth, each of which could exert pressures reaching 431,000 pounds per square inch (2,974 megapascals), "which allowed T. rex to bite through and even shatter bone before consuming it," said lead study researcher Paul Gignac, an assistant professor of anatomy and vertebrate paleontology at the Oklahoma State University Center for Health Sciences. [Gory Guts: Photos of a T. Rex Autopsy]

This is hardly the first time scientists have investigated the mighty tyrannosaur's bite force. For instance, scientists reported in 2012 that they had used digitally scanned T. rexskullsto make computer models, finding that the beast could bite with forces ranging from 7,868 to 12,814 pounds-force (35,000 to 57,000 newtons), Live Science previously reported.

However, the new study includes several advancements. For starters, it is the first published study on the pressure exerted by T. rex teeth, Gignac said. What's more, Gignac and co-researcher Gregory Erickson, a professor of biological science at Florida State University, used a novel method that involved studying the living descendants of dinosaurs (birds), and living cousins of dinosaurs (alligators and crocodiles) to learn more about T. rex's chomping abilities.

Most extinct dinosaurs did not have this bone-splintering ability, nor do modern reptiles. Today's carnivores, such as gray wolves and spotted hyenas, can break and eat bone, though they have specialized teeth for the feat.

"In this study, we show that Tyrannosaurus rex is the exception, and we sought to explain how this was possible," Gignac told Live Science in an email.

To begin, the researchers developed and tested a 3D anatomical model that predicted the bite forces of the American alligator (Alligator mississippiensis). "Once we understood how to build such models accurately, we constructed a similar one for T. rex," Gignac said.

They based the T. rex model on a computed tomography (CT) scan from a scaled replica of one of the best-preserved skulls. Then, they inferred the dinosaur's muscle arrangement using a combination of crocodile- and bird-like features, as well as cues from the giant dinosaur's own bone structure.

This model allowed them to estimate the bite force at any tooth position along the jaw, as well as across the known adult size range for the tyrannosaur group, Gignac said.

The results illustrate just how much damage T. rex could inflict with its teeth.

The dinosaur "managed these feats, in part, because of its large size but more so because a specific set of tooth traits — extraordinarily large, conical and strongly rooted teeth that were replaced after being worn biennially," he said. [Photos: Newfound Tyrannosaur Had Nearly 3-Inch-Long Teeth]

T. rex's teeth were up to 7 inches long, and were replaced about every two years, Gignac said.

"They were toothy," he said. "For example, the upper jaw alone had more than 30 teeth. Three of these teeth (on each side) were particularly large and typically engaged the tissues of prey or scavenged carcasses first to invoke damage to bone."

The dinosaur's ferocious bite would have helped it splinter the carcasses of large horned dinosaurs and duck-billed hadrosaurs, whose bones were rich in mineral salts and marrow, Gignac said.

The finding,  published online May 17 in the journal Scientific Reports, also shows how sophisticated eating systems, such as the ability to break bone, were present during the dinosaur age, he said.