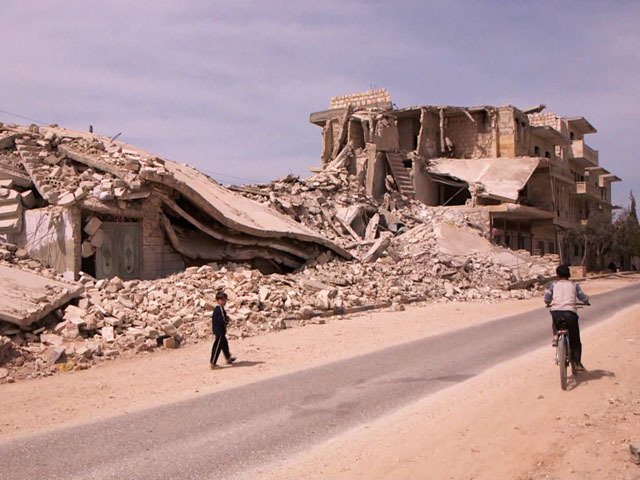 (CBS News) Syrian rebel commander Jamal Maarouf is credited with being the first to shoot down a government fighter jet -- a rare victory against the powerful Syrian air force.

Maarouf leads the Syrian Martyrs Brigade, a rebel group which is looking for help anywhere it can find it. He told us he's received guns and ammunition from outside Syria, but he's had to capture heavy weapons, like a tank, from the Syrian army.

He took us to the city of Maarat Nouman in northern Syria to show us what the government forces are doing.

"This is a civilian area," he told us. "They hit this area randomly, even though there are no fighters here."

Watch: Clarissa Ward reports on the two-year anniversary of the Syrian uprising, below.

Suddenly, we heard a government fighter jet wheel overhead, followed by the sound of anti-aircraft fire. Nervous residents scanned the skies to see where the plane would drop its bombs.

A short time later, we saw for ourselves: six bombs had landed on the tiny village where we were staying. Neighbors frantically tried to dig out the body of a woman, as her daughter cursed the Syrian President Assad.

Two women and a girl were killed. One bomb hit the house next to our sleeping quarters.

This was not a precision attack. Residents showed us proof: a parachute attached to one of the bombs. There's no control as they drift down from the sky, killing indiscriminately.

The villagers believe the intent was to terrorize them.

That night, the commander wanted to talk about how to limit Assad's ability to bomb at will.

"Right now, we still don't have a no-fly zone, and the regime is using long-range missiles," Maarouf says when asked what he would like the U.S. government do in Syria. "If we had a no-fly zone, we could take down the regime in a matter of weeks."

If the U.S. doesn't help, and the international community doesn't get involved, Maarouf says "either we will win the revolution, or else the Syrian people will be wiped out."

It's incredibly challenging to be a resident in this part of Syria. The people in the house that we were living in -- while they weren't actually injured by the blast -- all of the windows in their house were blown in, their furniture was broken, but more than that, there is the psychological devastation of witnessing an attack like that.

One woman went into a complete state of shock -- she was shivering uncontrollably, and she kept repeating over and over again, "Plane, plane." She was hallucinating. And you realize that the devastating damage that these bombs do is not just physical, it's mental, too.