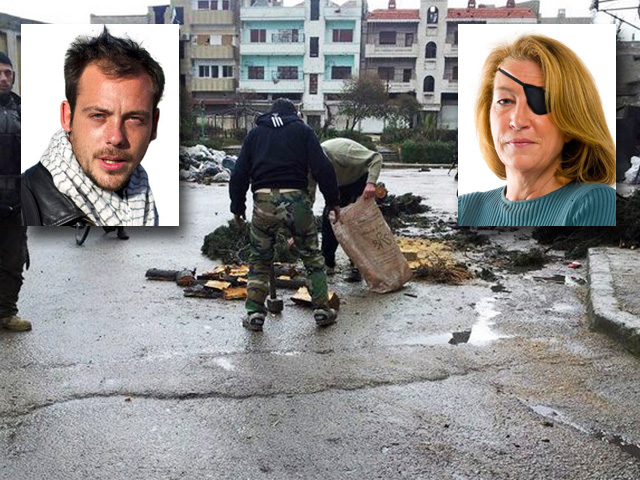 BEIRUT - Syrian forces intensely shelled the opposition stronghold of Homs as President Bashar Assad's regime also escalated attacks on rebel bases elsewhere, with helicopter gunships strafing areas in the northwest, activists said. The violence comes amid the deaths Wednesday of a French photojournalist and a prominent American war correspondent working for a British newspaper. In all, 74 people were killed nationwide.

Weeks of withering barrages on the central city of Homs have failed to drive out opposition factions that include rebel soldiers who fled Assad's forces. Hundreds have died in the siege and the latest deaths further galvanized international pressure on Assad, who appears intent on widening his military crackdowns despite the risk of pushing Syria into full-scale civil war.

"This tragic incident is another example of the shameless brutality of the Assad regime," U.S. State Department spokeswoman Victoria Nuland said of the journalists killed.

The Obama administration opened the door slightly Tuesday to international military assistance for Syria's rebels, with officials saying new tactics may have to be explored if Assad continues to defy pressure to halt a brutal crackdown on dissenters that has raged for 11 months and killed thousands.

The White House and State Department said they still hope for a political solution. But faced with the daily onslaught by the Assad regime against Syrian civilians, officials dropped the administration's previous strident opposition to arming anti-regime forces. It remained unclear, though, what, if any, role the U.S. might play in providing such aid.

France was outraged over the journalists killed.

Syria's stalwart ally and major arms supplier, Russia, remained behind Assad, but said the bloodshed adds urgency for a cease-fire to allow talks between his regime and opponents.

The Syrian military has intensified its attacks on Homs in the past few days, aiming to retake rebel-held neighborhoods that have become powerful symbols of resistance to Assad's rule. For the government in Damascus, Homs is a critical battleground to maintain its control of Syria's third-largest city and keep more rebel pockets from growing elsewhere.

In the northwestern province of Idlib, a main base of the rebel Free Syrian Army, the Britain-based Syrian Observatory for Human Rights claimed that Syrian military helicopters fitted with machine guns strafed the village of Ifis. Syrian combat helicopters are primarily Russian-made, though they also have a number of French choppers.

Another opposition group, the Local Coordination Committees, said troops conducted raids in the Damascus district of Mazzeh district and the suburb Jobar, where dozens of people were detained. In Jobar, the group said troops broke doors of homes and shops and set up checkpoints.

The group also said troops backed by tanks stormed the southern village of Hirak and conducted a wave of arrests.

A Homs-based activist, Omar Shaker, said the journalists were killed when several rockets hit a garden of a house used by activists and journalists in the besieged Homs neighborhood of Baba Amr, which has come under weeks of heavy bombardment by forces from Assad's regime. At least 13 people were killed in Wednesday's shelling, including the journalists, activists said.

The U.N. estimates that 5,400 people have been killed in repression by the Assad regime against a popular uprising that began 11 months ago. That figure was given in January and has not been updated. Syrian activists put the death toll at more than 7,300. Overall figures cannot be independently confirmed because Syria keeps tight control on the media.

On Wednesday, the U.N. said that Secretary-General Ban Ki-moon would dispatch Valerie Amos, the undersecretary-general for humanitarian affairs, to Syria to assess the situation. No date was set.

Twenty of the deaths reported Wednesday were in Homs, where resistance forces include breakaway soldiers. Homs has drawn comparisons to the Libyan city of Misrata, which withstood withering attacks last year by troops loyal to Muammar Qaddafi.

Shaker said tanks and artillery began intensely shelling at 6:30 a.m. and was continuing hours later. He said the apartment used by journalists was hit around 10 a.m.

The intense shelling in parts of Homs -- with blasts occurring sometimes just a few second apart -- has appeared to be indiscriminate over the past week, hitting homes and streets randomly. Some suggested, however, that the house used by the journalists and activists was pinpointed by Syrian gunners.

The French culture minister Mitterrand claimed the journalists were "pursued" as they tried to find cover, but gave no elaboration. A campaigner for online global activist group Avaaz, Alice Jay, claimed the group was "directly targeted."

An amateur video posted online by activist showed what they claimed were bodies of two people in the middle of a heavily damaged house. It said they were of the journalists. One of the dead was wearing what appeared to be a flak jacket.

Another amateur video shows the two injured journalists in a makeshift clinic, lying on two separate beds. The French journalist, Bouvier had her left leg tied from the thigh down in a cast. A doctor in the video explains that she needs emergency medical care. Conroy appears in the video and the doctors say he has deep gashes in his left leg.

Many foreign journalists have been sneaking into Syria illegally in the past months with the help of smugglers from Lebanon and Turkey. Although the Syrian government has allowed some journalists into the country their movement is tightly controlled by Information Ministry minders.

Colvin, from Oyster Bay, New York, was in her 50s and a veteran foreign correspondent for Britain's Sunday Times for the past two decades. She was instantly recognizable for an eye patch worn after being injured covering conflicts in Sri Lanka in 2001.

Colvin said she would not "hang up my flak jacket" even after the eye injury.

"So, was I stupid? Stupid I would feel writing a column about the dinner party I went to last night," she wrote in the Sunday Times after the attack. "Equally, I'd rather be in that middle ground between a desk job and getting shot, no offense to desk jobs.

Just recently, Colvin reported to the BBC from Homs about the shelling and mentioned seeing a baby die with shrapnel found on the left chest. "There are 28,000 people in Homs where I am, beseiged. They're here because they can't get out: the Syrians will not let them out, and are shelling all the civilian areas," she said in her report.

CBS News correspondent Vicki Barker from London knew Colvin and offered these thoughts: "I know Marie would say that the deaths of those civilians trapped in Homs are far more newsworthy than her own -- a journalist who chose to be there. But journalism has just lost one of its most courageous and clear-eyed witnesses. And her readers have lost a window into worlds few ever dare to tread, let alone describe. And that's worth taking a minute to memorialize, and mourn."

"This is a desperately sad reminder of the risks journalists take to inform the world of what is happening, and the dreadful events in Syria, and our thoughts should be with her family and with her friends," said British Prime Minister David Cameron.

Ochlik, who had set up a photo agency IP3 Press, won first prize in the general news category of the prestigious 2012 World Press Photo contest for his 12-photograph series titled "Battle For Libya."

"I just arrived in Homs, it's dark," Ochlik wrote to Paris Match correspondent Alfred de Montesquiou on Tuesday. "The situation seems very tense and desperate. The Syrian army is sending in reinforcements now and the situation is going to get worse — from what the rebels tell us."

The New York-based Committee to Protect Journalists condemned the killings of the journalists, calling them an "unacceptable escalation in the price that local and international journalists are being forced to pay" in Syria.

A statement by Information Minister Adnan Mahmoud said there was "no information" about Colvin, Ochlik and other foreign journalists in Syria who entered without official permission, the state-run news agency SANA reported. It warned all foreign journalists to come forward to "regularize their status."

In London, British diplomats summoned Syria's ambassador to the Foreign and Commonwealth Office, asking Syrian officials to facilitate immediate arrangements for the repatriation of the journalists' bodies and for help with the medical treatment of the British journalist injured in the attack.

The Britain-based Syrian Observatory for Human Rights said it had no information that the bodies of the two slain journalists had been carried out of Homs.

On Tuesday, a Syrian sniper killed Rami al-Sayyed, a prominent activist in Baba Amr who was famous for posting online videos from Homs, colleagues said.

On Jan. 11, award-winning French TV reporter Gilles Jacquier was killed in Homs. The 43-year-old correspondent for France-2 Television was the first Western journalist to die since the uprising began in March. Syrian authorities have said he was killed in a grenade attack carried out by opposition forces — a claim questioned by the French government, human rights groups and the Syrian opposition.

Last week, New York Times correspondent Anthony Shadid died of an apparent asthma attack in Syria after he sneaked in to cover the conflict.

In the northwestern province of Idlib, a main base of the Free Syrian Army, the Syrian Observatory for Human Rights claimed that Syrian military helicopters fitted with machine guns strafed the village of Ifis. Syrian combat helicopters are primarily Russian-made, though they also have a number of French choppers.

Another opposition group, the Local Coordination Committees, said troops conducted raids in the Damascus district of Mazzeh district and the suburb of Jobar, where dozens of people were detained. In Jobar, the group said troops broke down doors of homes and shops and set up checkpoints.

The group also said troops backed by tanks stormed the southern village of Hirak and conducted a wave of arrests.

In the Gulf nation of Bahrain, some anti-Assad protesters at a Syria-Bahrain Olympic qualifying football match waved the rebel flag and threw shoes at a small group of pro-regime supporters.