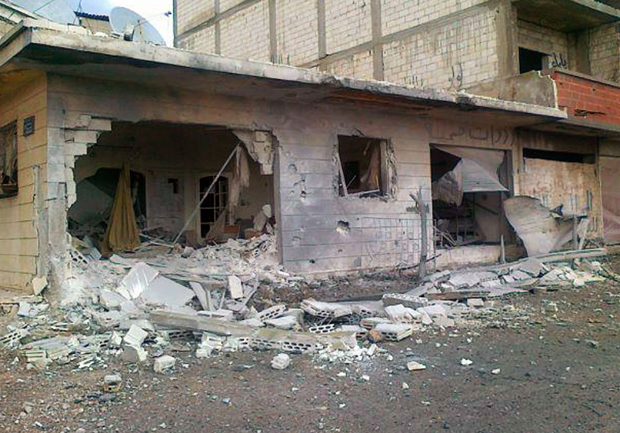 BEIRUT - Food and water are running dangerously low in the besieged Syrian city of Homs, with frantic cries for help from residents amid government shelling that pounded rebel strongholds and killed at least 30 people Tuesday, activists said.

Shells reportedly rained down on rebellious districts at a rate of 10 per minute at one point and the Red Cross called for a daily two-hour cease-fire so that it can deliver emergency aid to the wounded and sick.

"If they don't die in the shelling, they will die of hunger," activist and resident Omar Shaker told The Associated Press after hours of intense shelling concentrated on the rebel-held neighborhood of Baba Amr that the opposition has extolled as a symbol of their 11-month uprising against President Bashar Assad's regime.

Another 33 people were killed in northern Syria's mountainous Jabal al-Zawiya region when government forces raided a town in pursuit of regime opponents, raising Tuesday's overall death toll to 63, activists said. The Local Coordination Committees, an opposition group, said more than 100 were killed Tuesday, but the report could not immediately be confirmed by others.

Russia, one of Assad's remaining allies, urged the United Nations to send a special envoy to Syria to help coordinate security issues and delivery of humanitarian assistance.

Assad's forces showed no sign of easing their assault on Homs, Syria's third-largest city, whose defiance has become an embarrassing counterpoint to the regime's insistence that the opposition is mostly armed factions with limited public support.

The rebel defenses in Homs are believed to be bolstered by hundreds of military defectors, which has possibly complicated attempts by Syrian troops to stage an offensive. On Monday, reinforcements of Syrian tanks and soldiers massed outside the city in what could be a prelude to a ground attack.

"Government troops have been unable to advance because of stiff resistance from defectors inside," an activist in Homs told the AP on condition of anonymity, because of fears of government reprisal. Another activist in Homs said the shelling started after repeated attempts by troops to storm the edges of Baba Amr, which the opposition has dubbed "Syria's Misrata" after the Libyan city that refused to fall to withering government attacks last year.

One Homs resident, communicating with the AP by Internet chat, said many people are unable or too scared to go to the hospital for treatment. Some are bleeding to death at home.

"My cousin is a doctor and he said they've given up on treating serious wounds. The numbers are too many to cope with especially with so little supplies," said the resident, who has provided reliable information in the past. The resident spoke on condition of anonymity because of the fear of reprisal.

The resident, who lives just outside Baba Amr, said people in the neighborhood were surviving mostly on stocks of rice and canned corn and tuna, but those supplies also were running out fast after several weeks of attacks.

Some people go without bread for days, and when grocery stores and bakeries reopen during a lull in the shelling, long lines form quickly, the resident said, adding that shortages exist of all kinds of foodstuffs and vegetables.

The Red Cross said it has been negotiating with Syrian authorities and members of the opposition to agree a temporary cease-fire so emergency aid can reach beleaguered parts of the country.

"The current situation requires an immediate decision to implement a humanitarian pause in the fighting," said Jakob Kellenberger, the president of the Geneva-based International Committee of the Red Cross. "In Homs and in other affected areas, entire families have been stuck for days in their homes, unable to step outside to get bread, other food or water, or to obtain medical care."

Kellenberger said the cease-fire should last at least two hours daily, so that Red Cross staff and Syrian Arab Red Crescent volunteers have enough time to deliver aid and evacuate the wounded.

Beatrice Megevand-Roggo, the ICRC's head of operations for the Middle East, described Homs as "sort of a ghost city," adding that other parts of Syria also were badly affected by the fighting.

U.S. State Department spokeswoman Victoria Nuland said Washington was focused on "increasing the international isolation and the international pressure on the Assad regime to stop the violence altogether, so that we can move on to a democratic transition."

In the northern province of Aleppo, the government said a Syrian businessman, Mahmoud Ramadan, was shot to death in front of his home in what appeared to be the latest in a series of targeted killings. The attacks, which include the slaying of an Aleppo city council member Saturday, suggest that rebel factions are increasing turning to arms to strike back at members of Assad's ruling system.

Residents and activists say a monthslong siege and stepped up attacks on Baba Amr recently have left the district without enough food, water, medicine and electricity.

"They bombed all the water tanks on the roofs of buildings. There's no water. Some people have gone without bread for days," said Shaker, who estimated the shells fell at a rate of about 10 per minute at some points in the attack. More than 200 people were wounded, he said, adding that two children were among the dead.

Phone lines with Homs have been cut, making it difficult to get firsthand accounts from residents.

One amateur video posted on the Internet showed thick smoke and shells slamming behind a building in Baba Amr. Another showed a shop on the ground floor of a building on fire as a narrator cries: "We are dying. Where are the Arabs?"

The Arab League has tried to pressure Assad into a peace process with the opposition, but he has refused.

In another possible shift away from Assad, about 500 Palestinians gathered in Gaza at a Hamas-authorized demonstration in solidarity with Syrian protesters.

Assad has long hosted and supported leaders of the Islamic Hamas movement, which rules Gaza. But as the body count in Syria continues to rise, Hamas has been trying to distance itself from Damascus. Hamas has forged closer ties with rich Gulf states that oppose the Syrian regime and seeks to undercut Iran's influence.

A planned international meeting later this week in Tunisia will seek ways to help the Syrian people.

"People don't care if it's the devil intervening to save us from Bashar. We need the world's help," Shaker said.

In Moscow, Russian Foreign Ministry spokesman Alexander Lukashevich said Tuesday it will not attend the planned "Friends of Syria" meeting because organizers did not invite Syrian government representatives.

Russia and China have vetoed two U.N. Security Council resolutions backing Arab League plans aimed at ending the conflict and condemning Assad's crackdown on protests that killed 5,400 people in 2011 alone, according to the U.N. Hundreds more have been killed since, activist groups say. One of the groups puts the toll at more than 7,300.

Lukashevich said the meeting wouldn't help a dialogue, saying that the global community should act as friends of all the Syrian people, not just one part.

"It looks like an attempt to forge some kind of international coalition like it was with the setting up of a 'Contact Group' for Libya," he said.

Russia has said it will block any U.N. resolution that could pave the way for a replay of what happened in Libya. In that case, Russia abstained from a vote, which cleared the way for months of NATO airstrikes that helped Libyans end Moammar Gadhafi's regime.

In Jerusalem, Sen. John McCain condemned Russia and China for vetoing sanctions against Syria, saying their action was "not the behavior of mature nations." He suggested that weapons should be sent to those fighting the regime.

Iran — Syria's other strong ally — sent two warships through the Suez Canal on Tuesday on their way back from the Syrian port of Tartus. The ships had reportedly docked in Syria over the weekend on a mission to provide training for Syria's naval forces, according to Iranian media reports.

The Pentagon disputed those reports, saying there was no indication the ships had docked or delivered any cargo. U.S. Defense Department spokesman George Little said the Iranian ships now appear to be going back through the Suez Canal again.

Assad has announced a Feb. 26 referendum on a new constitution. The charter would allow a bigger role for political opposition to challenge Assad's Baath Party, which has controlled Syria since a 1963 coup. But leaders of the uprising have dismissed the referendum as an attempt at superficial reforms that do nothing to break the regime's hold on power.

In Jordan, Bernardino Leon, the EU's representative for the Southern Mediterranean, said Assad's regime missed the opportunity for reforms. "Syria is definitely not in a transition despite announcements of changes, despite plans for a referendum," Leon told reporters.