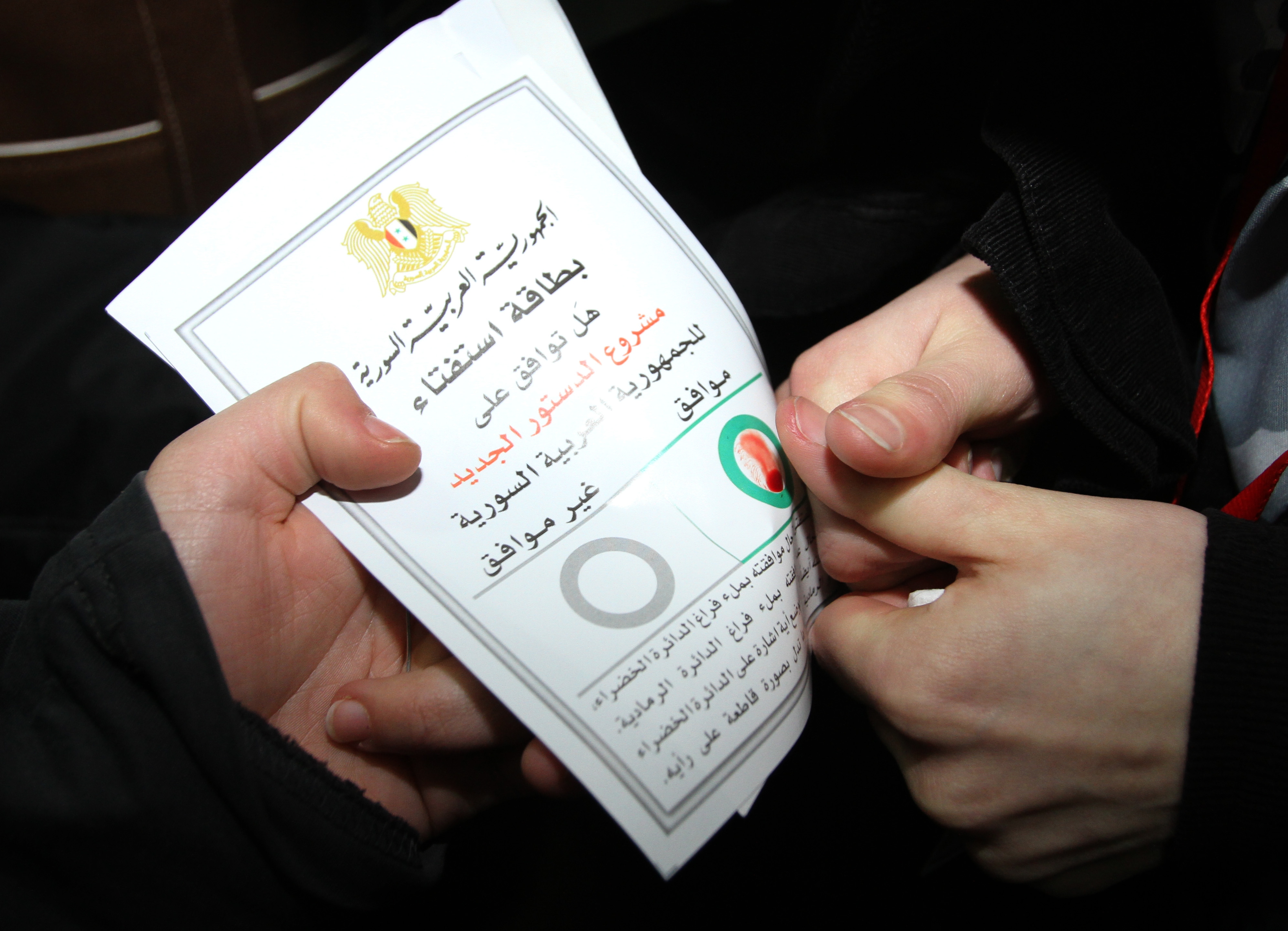 Syria's new constitution, which would put an end to five decades of one-party rule, won overwhelming approval of some 89 percent of participants in Sunday's referendum, Syria's interior minister said on Monday.

Ibrahim al-Shaar said in a press conference that the turnout in the country was 57.4 percent. The constitutional reforms, which include 14 new and 47 amended articles, were put forward by President Bashar Assad in an effort to stop the bloody uprising and pave the way for free elections in the country.

Amendments to Syria's constitution were a key demand by the opposition at the beginning of the country's protests against the Assad regime. But in the wake of the military's deadly assault on dissidents, which has been condemned by the U.S. and Syria's Arab League neighbors, many opposition leaders have demanded nothing less than Assad's departure.

The ballot measure read simply, "Do you agree on the new draft constitution?" Of the more than 8 million Syrians who voted, 9 percent voted no, al-Shaar said.

The heavy turnout was evident Sunday on a tour of several polling stations in the Christian Bab Touma neighborhood and around the main Saba Bahrat Square, or near the Omayed square, where President Bashar Assad himself, and his wife, Asma, cast their votes.

Posters around the capital Damascus urged people to cast ballots. "Don't turn your back on voting," one said.

Cars and other vehicles loaded with people, mainly youngsters, have been driving down several main roads of the capital honking their horns and letting Syrian flags fly out of the windows.

Despite the fact that the opposition boycotted the referendum, calling it an empty gesture, there were no public order violations in Damascus during the vote.

However, human rights campaigners reported blasts in Homs, Hama, Deir al-Zor, Deraa and some smaller towns caught up in an almost year-long uprising against the Syrian regime.

American correspondent Marie Colvin and French photographer Remi Ochlik were killed in the bombardment of Homs last week and other Western journalists in the city were wounded. The group is still trapped there despite Red Cross efforts to extract them.

The 157-article proposed charter would drop Article 8 of the Syrian constitution which declares the ruling Ba'ath Party as the "leader of the state and society".

Under the new constitution, authored by a 29-member constitutional committee, other parties would have the right to name their own candidates for the presidency, which would be set at a maximum of two consecutive seven-year terms.

It is still not clear if Assad would be able to run for another two terms or whether he would have to stand down when his current one ends in 2014.

Despite the ongoing unrest and calls for Assad's departure by the United States, Europe and many Arab nations, the incumbent leader still maintains substantial support in Syria. In the capital Damascus, religious minorities and the business class many were eager to vote.

Christians who have seen churches and worshipers targeted by Islamic extremists in neighboring Iraq are also fearful that the uprising will take a fundamentalist turn. They usually side with Assad because they have been safe under his rule.

The unrest started in March with mostly peaceful protests against the authoritarian regime. But the conflict has escalated in recent months into an open conflict between rebels troops and pro-Assad forces, with many observers warning the nation may be heading toward all out civil war.

The United Nations estimated the death toll from the unrest at 5,400 in 2011 alone. The global body stopped updating that figure in 2012, however, as escalating violence and the government's ban on independent reporting made it difficult to obtain accurate information.

This is Syria's third referendum since Assad came to power from his late father. The first installed him as president in 2000 with an official 97.29 percent "yes" vote. The second renewed his term seven years later with 97.62 percent in favor.