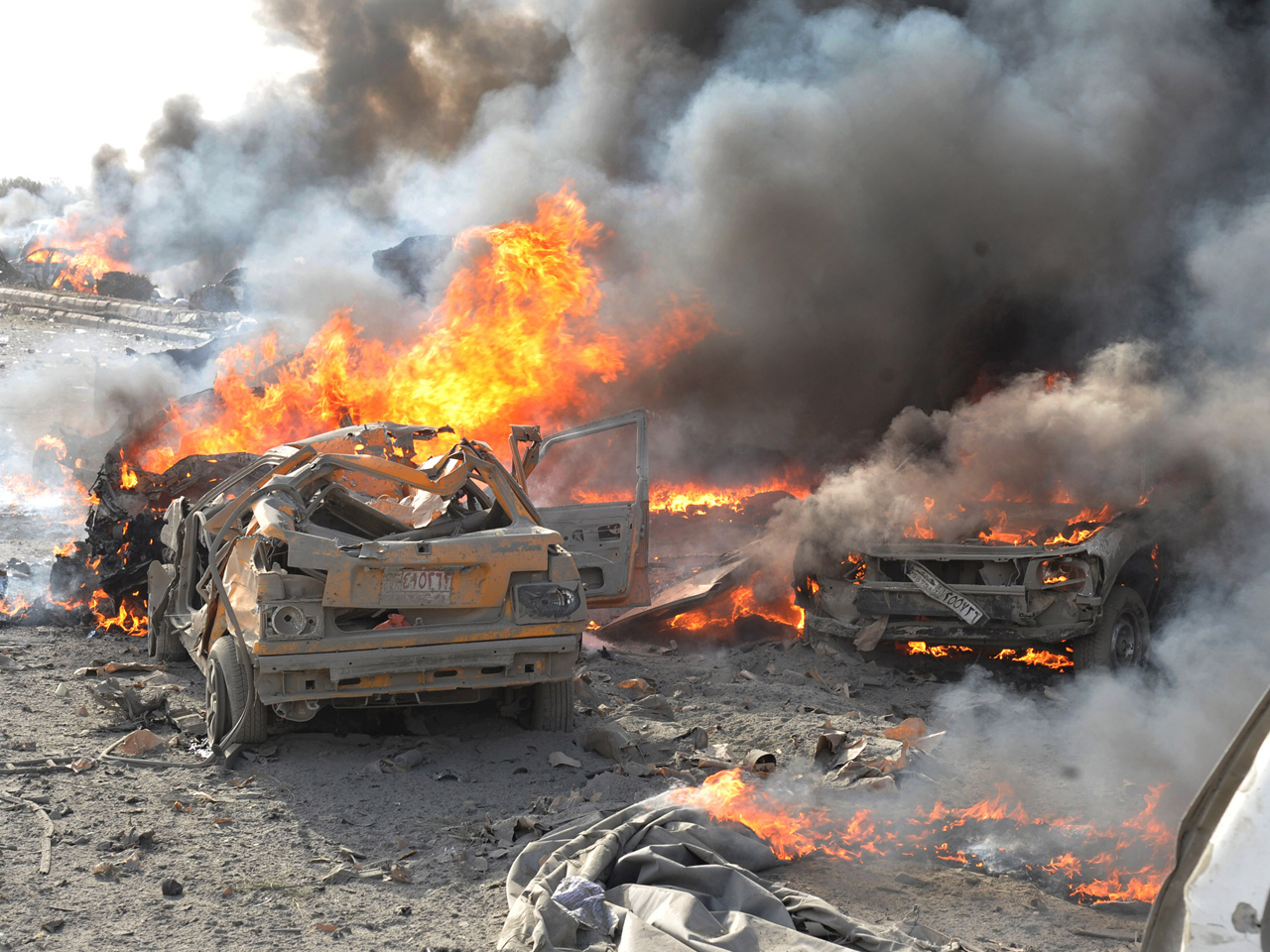 (CBS/AP) DAMASCUS, Syria - Two suicide car bombs ripped through the Syrian capital Thursday, killing at least 55 people and tearing the facade off a military intelligence building in the deadliest explosions since the country's uprising began 14 months ago, the Interior Ministry said.

Residents told an Associated Press reporter that the blasts happened in quick succession during morning rush hour, with an initial small explosion followed by a larger bomb that appeared aimed at onlookers and rescue crews arriving at the scene. Paramedics wearing rubber gloves collected human remains from the pavement as heavily damaged cars and pickup trucks smoldered.

CBS News' George Baghdadi says human remains and badly burned bodies littered the streets after the explosions, which also destroyed as many as 40 cars and pickup trucks. Baghdadi says the explosions appear to have targeted the so-called Palestine intelligence branch, and an aviation headquarters.

There was no claim of responsibility for Thursday's blasts. But an al Qaeda-inspired group has claimed responsibility for several past explosions, raising fears that terrorist groups are entering the fray and exploiting the chaos.

In addition to the 55 dead, the ministry also said there were 15 bags of human remains, meaning the death toll was likely to rise.

More than 370 people also were wounded in the attack, according to the ministry, which is in charge of the country's internal security. It said the explosives weighed more than 1,000 kilograms (2,200 pounds).

The Syrian government blamed "terrorists" and said dozens were killed or wounded, most of them civilians. The leading opposition group, however, the Syrian National Council, cast blame on the government itself, according to Al-Arabiya television. The opposition has previously accused the Assad regime of carrying out large bomb attacks targeting government workers and buildings.

The actual culpability in the previous attacks has remained impossible to verify independently, given the restrictions on foreign media in Syria.

"The explosions shook the house; it was frightening," Mohhamed Ali, a local resident, tells CBS News. "I saw tens of bodies burned and dozens of wounded, mostly from the security (services)" he added. "I live a few hundred meters (yards) away but I saw some fingers in my neighborhood. The blast was huge."

Baghdadi says ambulances and other emergency vehicles were still working among the carnage as heavy earthmoving equipment began to clear the rubble. A crater about a yard and a half across and two yards deep could be seen at the spot where one off the blasts went off.

"We are concerned about the fact that this is a further indication that, far from having a ceasefire, the violence continues. It very much worries us with regard to whether the Annan plan can be implemented," Nuland said.

Despite the unclear origin of the attackers, Nuland said much of the blame for the current situation rests with the Assad regime.

"It is the Assad regime that created this climate of violence that is causing not only folks to take up arms in defense but is also providing an environment, potentially, for mischief to be made by others who don't favor peace in Syria," Nuland said.

Central Damascus is tightly under the control of forces loyal to President Bashar Assad but has been struck by several bomb attacks, often targeting security installations or convoys.

The latest major explosion in the capital occurred on April 27 when a suicide bomber detonated an explosives belt near members of the security forces, killing at least nine people and wounding 26.

Syria's conflict started in March 2011 with mass protests calling for political reform. The government swiftly cracked down, dispatching tanks, troops, snipers and pro-government thugs to quash dissent, and many members of the opposition took up arms to defend themselves and attack government troops. Many soldiers also switched sides.

There was no claim of responsibility for Thursday's blasts. But an al Qaeda-inspired group has claimed responsibility for several past explosions, raising fears that terrorist groups are entering the fray and exploiting the chaos.

The U.N. said weeks ago that more than 9,000 people had been killed. Hundreds more have died since.

International diplomacy has failed to stop the bloodshed, and the U.N. has ruled out military intervention of the type that helped bring down Libya's Moammar Gadhafi, in part out of fear that it could exacerbate the violence.

Special envoy Kofi Annan brokered a peace plan last month, but the initiative has been troubled from the start, with government troops shelling opposition areas and rebels attacking military convoys and checkpoints after the cease-fire was supposed to begin on April 12. Many civilians have grown critical of the plan, saying it does not protect them from regime forces.

Although the daily death toll has dropped in recent days, Annan said Tuesday that the level of violence is unacceptable and that the plan's failure could lead to civil war.

A team of 70 U.N. military observers now in Syria should grow to more than 100 in the coming days. A full team of 300 is expected by the end of the month to oversee a cease-fire intended to allow for talks on a political solution to the conflict.

On Wednesday, a roadside bomb hit a Syrian military truck in a southern province just seconds after the head of the U.N. observer team was driving by in a convoy, demonstrating the fragility of the international plan to end the country's bloodshed.