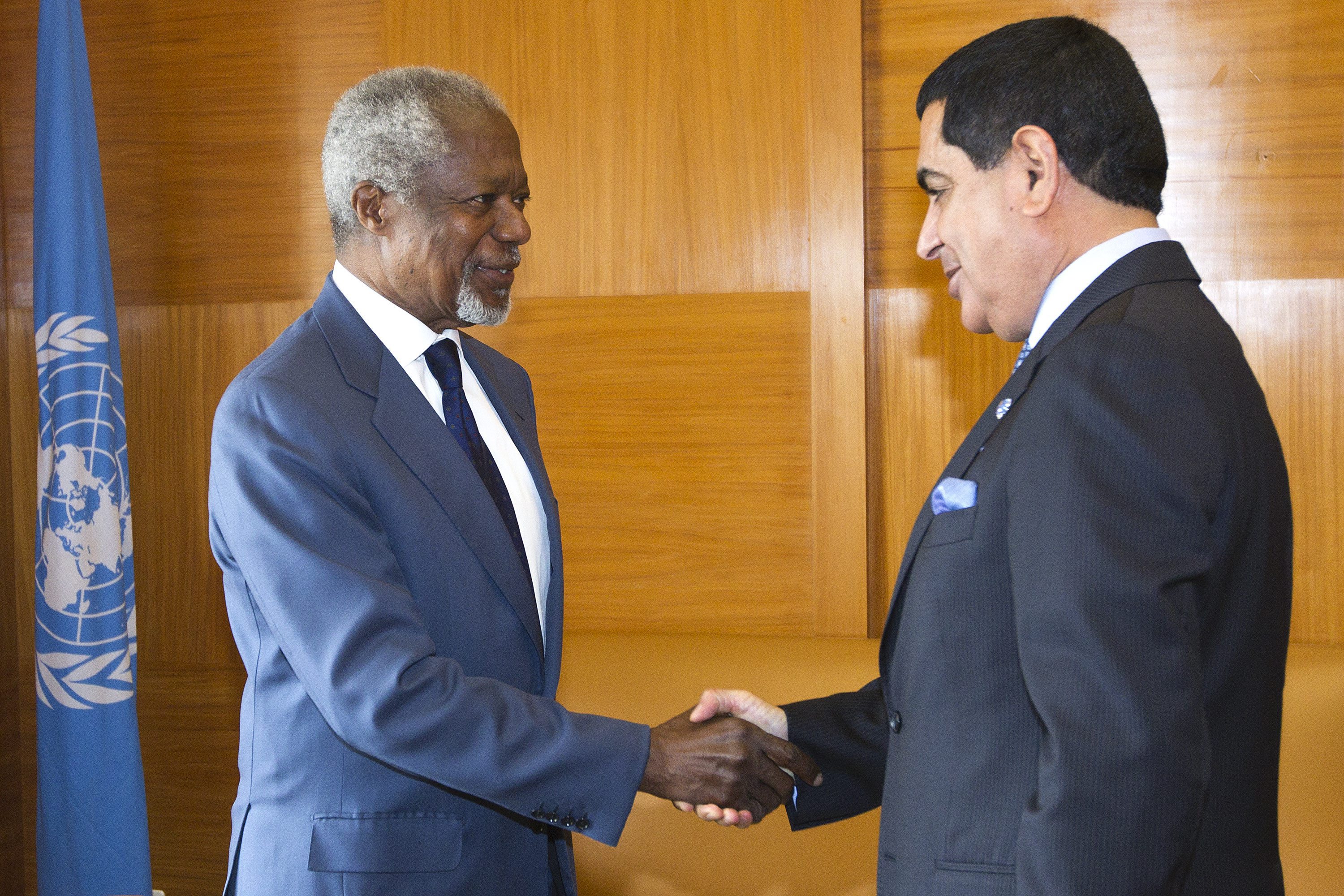 (CBS/AP) GENEVA - World powers share a "profound concern" that Syria could descend into civil war, international envoy Kofi Annan said Tuesday, but nations remain committed to his six-point peace plan and have pledged to deploy 300 cease-fire monitors there by the end of the month.

He warned, however, that the world can't wait forever for the cease-fire plan to work, and noted that the bloodshed hasn't ended despite the truce.

Annan, who has been tasked by the United Nations and the Arab League with devising a solution to end Syrian President Bashar Assad's brutal crackdown on a popular uprising, spoke to reporters in Geneva after briefing a closed-door session of the U.N. Security Council in New York by videoconference.

Earlier Tuesday, the Red Cross said the Syrian conflict is transforming into a guerrilla war involving ambushes and bombings instead of sustained battles such as the military assaults on rebellious areas seen earlier in the uprising. It also warned that 1.5 million Syrians are struggling to meet basic needs.

"U.S. Ambassador Susan Rice said the situation is dire," reported CBS News' Pamela Falk, from the U.N., "and Mark Lyall Grant, U.K. ambassador, said that none of the commitments that the government have made under the six-point plan have been fully implemented."

"With an uptick in violence in Syria, some members of the U.N. Security Council want to return to the Council to explore other measures," Falk reported, "but they are all trying to hold out to see if the U.N. observers make a difference."

Annan said the U.N.'s cease-fire-monitoring mission "is the only remaining chance to stabilize" Syria.

"There is a profound concern that the country could otherwise descend into full civil war, and the implications of that are frightening," he said during the impromptu press conference. "We cannot allow that to happen."

Annan said he also told the Security Council that "unacceptable levels of violence and abuse" are continuing in Syria -- that government troops are still present in and around cities and towns and human rights violations are extensive and may be increasing.

"There have been worrying episodes of violence by the government, but we have also seen attacks against government forces, troops and installations. And there have been a spate of bombings that are really worrying, and I'm sure creates incredible insecurity among the civilian population," he said.

He said there has been "some decrease in the military activities, but there are still serious violations in the cessation of violence that was agreed and the level of violence and abuses are unacceptable," he said.

Annan warned that his peace plan aimed at halting the fighting and initiating political talks to end the 14-month-old conflict is not open-ended. The Security Council has endorsed the plan and authorized 300 unarmed military observers to monitor actions by the Assad regime and opposition for three months.

What began as a largely peaceful protest movement has evolved into more Syrians taking up arms in the face of the Syrian government's crackdown. Assad, 46, who inherited power from his father in 2000, portrays the uprising as a plot by terrorists with foreign backing to weaken the country. The U.N. says more than 9,000 people have been killed in the conflict so far.

"We may well conclude down the line that it doesn't work and a different tack has to be taken, and that will be a very sad day, and a tough day for the region," Annan said.

British Ambassador Grant said U.N. peacekeeping chief Herve Ladsous told the council that 60 military observers are on the ground along with 37 civilian staff and that he expects to have "more than a hundred observers by the end of the week and the full 300 complement by end of the month."

Annan also tried to sound a note of optimism.

"We've been small in numbers, but even where we've been able to place two or three observers, they've had a calming effect," he said.

"And I think that when they are fully deployed and working as a team, establishing relations with the people, we will see much greater impact on the work that they are there to do."

Jakob Kellenberger, president of International Committee of the Red Cross, said earlier in the day that the fighting in some parts of Syria now amounts to "non-international armed conflicts" -- the equivalent of localized civil wars.

"At least in recent weeks, you have no longer these big battles like one had in Homs in the second half of February," Kellenberger told a news conference at ICRC headquarters in Geneva. "You have more guerrilla attacks and bomb attacks."

The distinction that this is an internal armed conflict is important because under international humanitarian law the government and opposition gain additional rights to use force but could be held accountable for possible war crimes.

"Our priority is to improve living conditions and to restore public services for up to 1.5 million people affected by the fighting," Kellenberger said. "Many people are still struggling just to make it through the day."

Kellenberger also said ICRC has gained permission to visit detainees at Aleppo's central prison from May 14-23 and is pushing for access to others. The Red Cross, meantime, is appealing for $27 million to quickly scale up aid.

Syria was counting votes Tuesday for seats in the 250-member parliament, but the opposition boycotted the election and the U.S. described it as bordering on ludicrous. The Syrian parliament is considered a rubber-stamp body for the Assad regime and the balloting is unlikely to change the trajectory of the revolt in Syria, which has become a grim cycle of crackdown and reprisal.

German Foreign Minister Guido Westerwelle told reporters in Berlin on Tuesday that the parliamentary elections held this week appeared to be an attempt by the Assad government to delay implementing the cease-fire.

"We don't want any playing for time," Westerwelle said. "The promises in the cease-fire must be kept."

After Annan's briefing, Syria's U.N. Ambassador Bashar Ja'afari reiterated Syria's commitment to the Annan plan, and said things are going "in the right direction" to fulfill it.

But he accused Qatar, Saudi Arabia, Turkey and other unnamed countries of trying to sabotage peace efforts by financing and supporting the smuggling of weapons to the opposition. He also said "terrorists" along with members of al Qaeda are escalating the violence, which is "the core issue we are facing right now and what we need to deal with urgently."

U.S. Ambassador Rice, however, said Tuesday that if Syria doesn't fully implement the Annan plan, the U.S. will be ready "to look at other means of increasing the pressure on the Syrian regime to comply with the plan" including potentially asking the Security Council for further non-military sanctions.