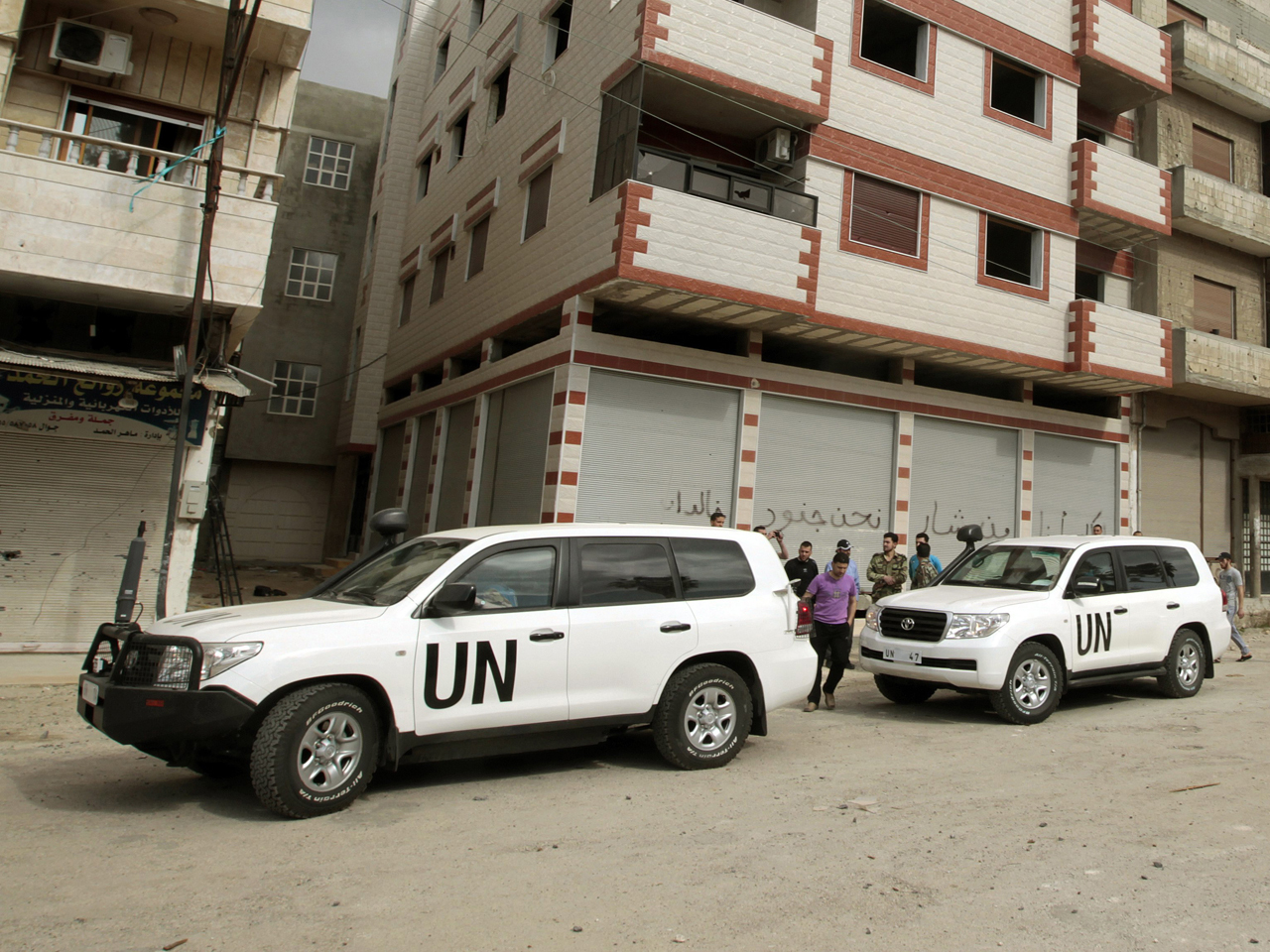 (CBS/AP) DARAA, Syria - A roadside bomb hit a Syrian military truck Wednesday just seconds after the head of the U.N. observer team drove by, demonstrating the fragility of the international plan to end the country's bloodshed.

Wednesday's attack, which wounded several Syrian soldiers, emphasized the limits of the international community's plan to use unarmed observers to promote a cease-fire between government troops and rebels trying to topple Assad.

The team of 70 U.N. military observers now in Syria should grow to more than 100 in the coming days. It is unclear when the full team of 300 will arrive. They are to oversee a cease-fire intended to allow for talks on a political solution to the conflict.

U.N. Secretary General Ban Ki-Moon condemned the attack, saying the continuing violence undermines the plan, which is "possibly the only remaining chance to stabilize the country and avert a civil war."

The peace plan has been troubled from the start, with government troops shelling opposition areas and rebels attacking military convoys and checkpoints after the cease-fire was supposed to begin on April 12. Many civilians have grown critical of the plan, saying it does not protect them from regime forces.

Although the daily death toll has dropped in recent days, international envoy Kofi Annan said Tuesday that the level of violence is unacceptable and that the plan's failure could lead to civil war.

Wednesday's blast, witnessed by a reporter from The Associated Press who was traveling with the United Nations, provided a close-up example of the attacks on security forces that have become almost daily events.

The bomb went off as Maj. Gen. Robert Mood, head of the U.N. observer team, drove from the capital, Damascus, to the southern city of Daraa, where Syria's uprising began.

The explosion, about 100 meters behind the convoy, shattered the windows of a Syrian military truck and sent up a cloud of smoke and red sand. The truck sped into the city, where several bloodied soldiers were rushed to a hospital.

Speaking to reporters later, Mood said it was unclear whom the bomb was meant for.

"For me the important thing is really not speculating about who was the target, what was the target, but it is to make the point that this is what the Syrian people (are) seeing every day and it needs to stop," he said. "Whoever is doing it and whoever is supporting it."

There were no casualties among the U.N. observer team.

No one claimed responsibility for the bombing. The regime blames such attacks on terrorists behind the anti-Assad uprising.

An exiled rebel leader, Col. Riad al-Asaad, warned that armed groups in the country would resume attacks because the government had flouted the cease-fire, the London-based Asharq al-Awsat newspaper reported Wednesday. Al-Asaad told the paper that "our people are demanding that we defend them."

Syria's conflict started in March 2011 with mass protests calling for political reform. The government swiftly cracked down, dispatching tanks, troops, snipers and pro-government thugs to quash dissent, and many members of the opposition took up arms to defend themselves and attack government troops.

The U.N said weeks ago that more than 9,000 people had been killed. Hundreds more have died since.

International diplomacy has failed to stop the violence, and the U.N. has ruled out military intervention of the type that helped bring down Libya's Muammar Qaddafi, in part out of fear that it could exacerbate the violence.

On Wednesday, Obama notified Congress that he is extending a "national emergency" that allows the president to impose a variety of punishments and controls against Syria. The renewal came two days before the state of emergency was set to expire.

An amateur video posted online Wednesday showed a U.N. observer telling a resident in the town of Talbiseh that the team had come to investigate a recent attack and file a report.

The resident said that was not enough, that the conflict has been going on for over a year and there were still army checkpoints around the city. Another video Wednesday from the same city showed the observers walking up to a government tank.