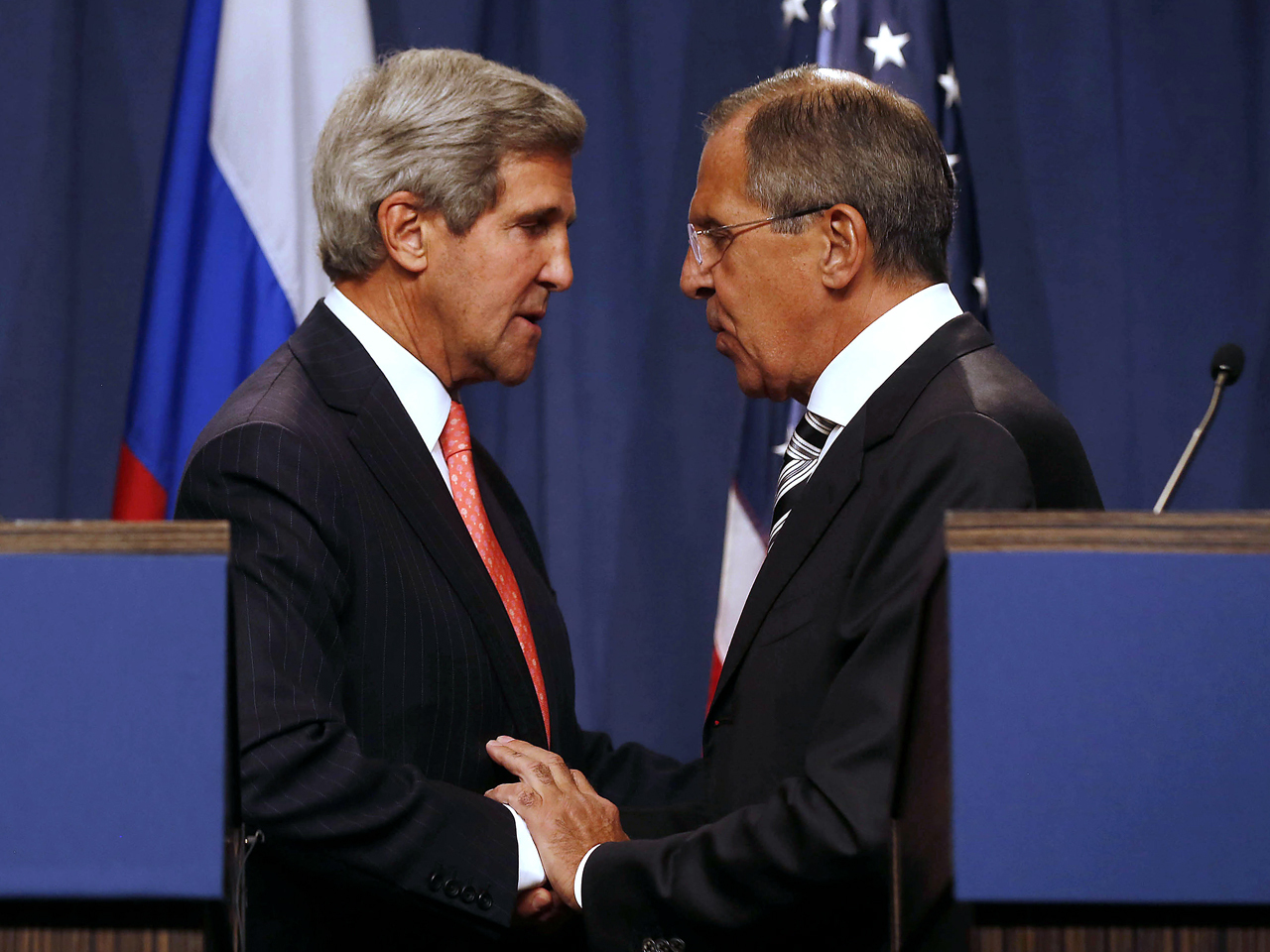 GENEVA A diplomatic breakthrough Saturday on securing and destroying Syria's chemical weapons stockpile averted the threat of U.S. military action for the moment and could swing momentum toward ending a horrific civil war.

Marathon negotiations between U.S. and Russian diplomats at a Geneva hotel produced a sweeping agreement that will require one of the most ambitious arms-control efforts in history.

The deal involves making an inventory and seizing all components of Syria's chemical weapons program and imposing penalties if President Bashar Assad's government fails to comply will the terms.

CBS News correspondent Margaret Brennan reported on "CBS This Morning: Saturday" from Geneva that Kerry said the Assad regime has a week to provide all details on its chemical weapons arsenal.

After days of intense day-and-night negotiations between U.S. Secretary of State John Kerry and Russian Foreign Minister Sergey Lavrov and their teams, the two powers announced they had a framework for ridding the world of Syria's chemicals weapons.

The U.S. says Assad used chemical weapons in an Aug. 21 attack on the outskirts of Damascus, the capital, killing more than 1,400 civilians. That prompted President Obama to ready American airstrikes on his order — until he decided two weeks ago to ask for authorization from Congress. Then came the Russian proposal, and Mr. Obama asked Congress, already largely opposed to military intervention, to delay a vote.

Mr. Obama said the deal "represents an important, concrete step toward the goal of moving Syria's chemical weapons under international control so that they may ultimately be destroyed."

"This framework provides the opportunity for the elimination of Syrian chemical weapons in a transparent, expeditious and verifiable manner, which could end the threat these weapons pose not only to the Syrian people but to the region and the world," he said in a statement.

Kerry and Lavrov said they agreed on the size of the chemical weapons inventory, and on a speedy timetable and measures for Assad to do away with the toxic agents.

But Syria, a Moscow ally, kept silent on the development, while Mr. Obama made clear that "if diplomacy fails, the United States remains prepared to act."

The deal offers the potential for reviving international peace talks to end a civil war that has claimed more than 100,000 lives and sent 2 million refugees fleeing for safety, and now threatens the stability of the entire Mideast.

Kerry and Lavrov, along with the U.N.-Arab League envoy to Syria, Lakhdar Brahimi, said the chances for a follow-up peace conference in Geneva to the one held in June 2012 would depend largely on the weapons deal.

International inspectors are to be on the ground in Syria by November. During that month, they are to complete their initial assessment and all mixing and filling equipment for chemical weapons is to be destroyed. They must be given "immediate and unfettered" access to inspect all sites.

All components of the chemical weapons program are to be removed from the country or destroyed by mid-2014.

"Ensuring that a dictator's wanton use of chemical weapons never again comes to pass, we believe is worth pursuing and achieving," Kerry said.

For the moment, the deal may not do much to change the fighting on the ground. But the impasse in the international community over how to react could ease somewhat with the U.S. and Russia also agreeing to immediately press for a U.N. Security Council resolution that enshrines the weapons deal.

They will seek a resolution under Chapter 7 of the U.N. Charter, which can authorize both the use of force and nonmilitary measures.

But Russia, which already has rejected three resolutions on Syria, would be sure to veto a U.N. move toward military action, and U.S. officials said they did not contemplate seeking such an authorization.

"The world will now expect the Assad regime to live up to its public commitments," Kerry told a news conference at the hotel where round-the-clock negotiations were conducted since Thursday night. "There can be no games, no room for avoidance or anything less than full compliance by the Assad regime."

Kerry and Lavrov emphasized that the deal sends a strong message not just to Syria but to the world, too, that the use of chemical weapons will not be tolerated.

Lavrov added, cautiously, "We understand that the decisions we have reached today are only the beginning of the road."

In an interview with Russian state television, Lavrov said the groundwork for such an approach to Syria's chemical weapons stockpile began in June 2012 when Mr. Obama and Russian President Vladimir Putin met on the sidelines of the G-20 summit in Los Cabos, Mexico.

"Both sides expressed serious concern that it could not be ruled out that the chemical weapons which Syria possessed according to American and our information could fall into the wrong hands," Lavrov said. The presidents agreed to share information on a regular basis about Syria's arsenal, he said.

Lavrov said both Russian and U.S. officials went on to contact Syrian leaders to determine the safety of weapons storage.

U.S. officials, speaking on condition of anonymity because they were not authorized to publicly discuss details of the negotiations, said the U.S. and Russia agreed that Syria had roughly 1,000 metric tons of chemical weapons agents and precursors, including blister agents, such as sulfur and mustard gas and nerve agents like sarin.

These officials said the two sides did not agree on the number of chemical weapons sites in Syria.

U.S. intelligence believes Syria has about 45 sites associated with chemicals weapons, half of which have "exploitable quantities" of material that could be used in munitions. The Russian estimate is considerably lower; the officials would not say by how much.

Non-compliance by the Assad government or any other party would be referred to the 15-nation Security Council by the Organization for the Prohibition of Chemical Weapons. That group oversees the Chemical Weapons Convention, which Syria this past week agreed to join. The U.N. received Syria's formal notification Saturday and it would be in effect Oct. 14.

The weapons group's director-general, Ahmet Uzumcu, spoke of adopting "necessary measures" to put in place "an accelerated program to verify the complete destruction" of Syria's chemical weapons, production facilities and "other relevant capabilities."

The U.S. and Russia are two of the five permanent Security Council members with a veto. The others are Britain, China, and France.

"There is an agreement between Russia and the United States that non-compliance is going to be held accountable within the Security Council under Chapter 7," Kerry said. "What remedy is chosen is subject to the debate within the council, which is always true. But there's a commitment to impose measures."

Lavrov indicated there would be limits to using such a resolution.

Kerry spoke of a commitment, in the event of Syrian noncompliance, to "impose measures commensurate with whatever is needed in terms of the accountability."

The agreement offers no specific penalties. Given that a thorough investigation of any allegation of non-compliance is required before any possible action, Moscow could drag out the process or veto measures it deems too harsh.

Kerry stressed that the U.S. believes the threat of force is necessary to back the diplomacy, and Mr. Obama has retained the right to launch military strikes without U.N. approval to protect American national security interests.

"I have no doubt that the combination of the threat of force and the willingness to pursue diplomacy helped to bring us to this moment," Kerry said.

Republican Sens. John McCain of Arizona and Lindsey Graham of South Carolina, who are among Mr. Obama's sharpest foreign policy critics and support greater U.S. assistance for Syria's rebels, said the agreement will embolden enemies such as Iran.

"What concerns us most is that our friends and enemies will take the same lessons from this agreement: They see it as an act of provocative weakness on America's part," they said in a joint statement. "We cannot imagine a worse signal to send to Iran as it continues its push for a nuclear weapon."

House Democratic leader Nancy Pelosi of California credited the president's "steadfast leadership" for "making significant progress in our efforts to prevent the use of weapons of mass destruction." She also credited Mr. Obama's "clear and credible" threats to use force against Syria for making the agreement possible.

U.N. inspectors were preparing to submit their report on the chemical weapons attack on the outskirts of Damascus on Aug. 21. Secretary-General Ban Ki-moon said Friday that he expected "an overwhelming report" that chemical weapons were indeed used.

A U.N. statement said Ban hoped the agreement will prevent further use of such weapons and "help pave the path for a political solution to stop the appalling suffering inflicted on the Syrian people."

The commander of the Free Syrian Army rebel group, Gen. Salim Idris, said in Turkey that the Russian initiative would "buy time" and that rebels will continue "fighting the regime and work for bringing it down."

He said that if international inspectors come to Syria in order to inspect chemical weapons, "we will facilitate their passages but there will be no cease-fire." The FSA will not block the work of U.N. inspectors, he said, and the "inspectors will not be subjected to rebel fire when they are in regime-controlled areas."

Idris said Kerry told him by telephone that "the alternative of military strikes is still on the table."

Biden pushes economic and security aims as he ends visit to South Korea
Thanks for reading CBS NEWS.
Create your free account or log in
for more features.
View CBS News In
CBS News App Open
Chrome Safari Continue
Be the first to know
Get browser notifications for breaking news, live events, and exclusive reporting.