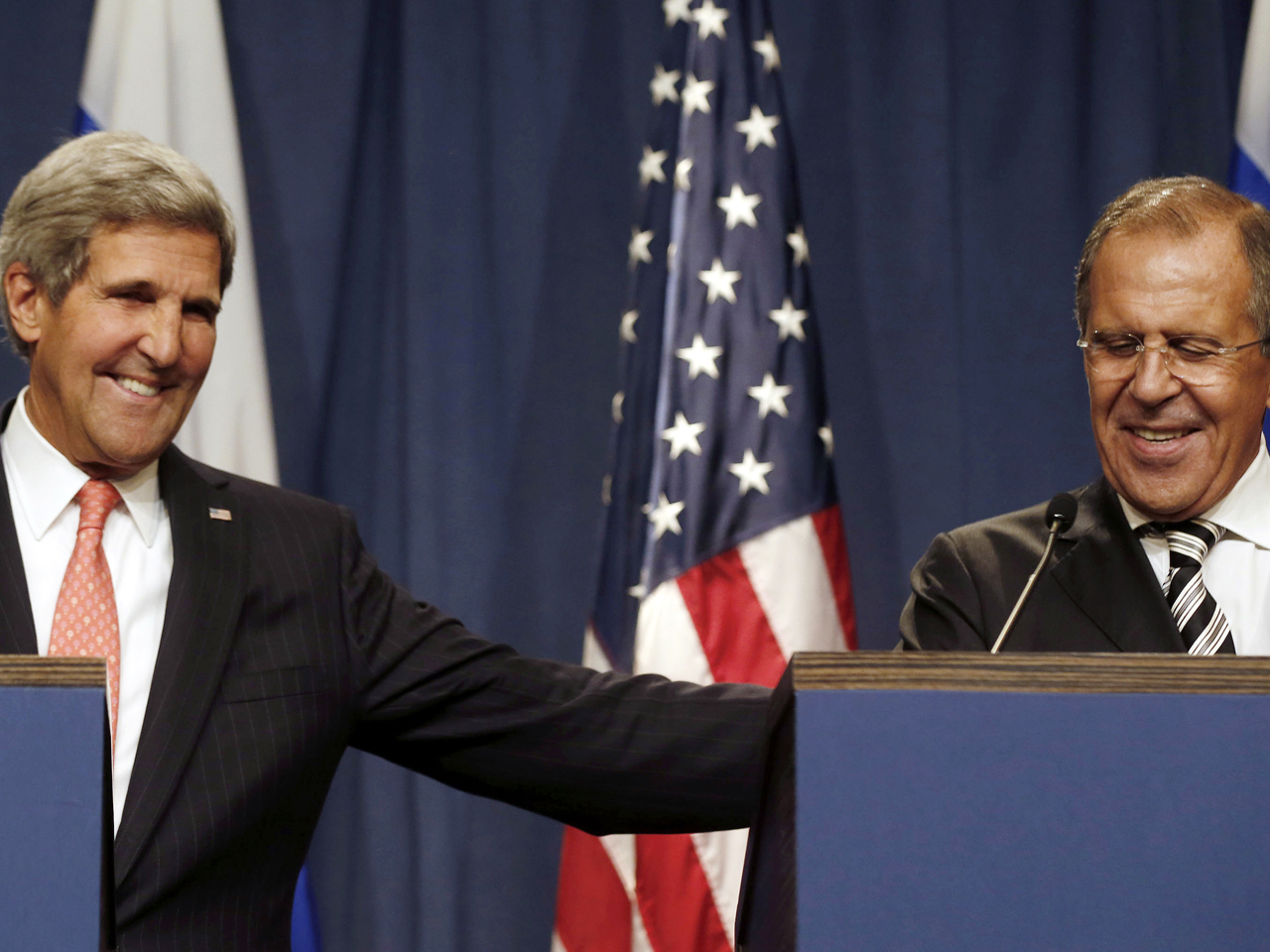 The U.S. and Russia shook hands on a groundbreaking framework agreement Saturday to identify Syria's chemical weapons, place them under control of the Chemical Weapons Convention and its compliance body, the Organization for the Prohibition of Chemical Weapons, and to ultimately dismantle them.

"The world will now expect the Assad regime to live up to its public commitments," U.S. Secretary of State John Kerry said.

U.N. sources said Sunday the U.N. chemical weapons inspectors' report on the alleged chemical weapons attack near Damascus will be made public Monday morning, and Ake Sellstrom, the Swedish scientist who heads the team, will be on hand to brief U.N. Security Council members in closed-door consultations.

The spokesman for the U.N. Secretary-General said Sunday he received the formal instrument of accession to the 1992 Chemical Weapons Convention from Syria on Saturday and said that Syria's membership will enter into force on October 14, 2013.

The Syria chemical weapons disarmament agreement between Kerry and Russian Foreign Minister Sergey Lavrov was a breakthrough and a relief to both the U.S. and Russia.

There has been a clear shift represented in the Geneva framework: Russia has agreed to put forward an enforceable U.N. Security Council resolution and to include a provision that envisions further measures in the event of non-compliance by Syria.

Negotiations will now turn to U.N. ambassadors, and Kerry indicated on Saturday that the U.S. has agreed to not have a use-of-force trigger in the U.N. resolution, but he will seek one if Syrian President Bashar Assad does not follow through.

"There is nothing said about the use of force and not about any automatic sanctions," Lavrov said Saturday.

A diplomat involved in the negotiations said there are ways to forge a compromise.

The history of Security Council resolutions supports his point.

There are various examples of such "Chapter 7" resolutions. Some use the explicit language that allows for the use of military force and state that the council is acting under its authority; others refer to the possibility that the use of force may be invoked if there is non-compliance within the text of the resolution. Still more are intentionally vague, using the language of Chapter 7, but that the use of force isn't under the council's authority.

"We are not going to pre-judge the outcome of negotiations that are just beginning in New York," Erin Pelton, communications director and spokeswoman for U.S. Ambassador to the U.N. Samantha Power. "The U.S. has been clear that for any effort to be credible it must be verifiable and include consequences for non-compliance."

On Monday, the world will watch for the rollout of the U.N. report on last month's deadly chemical-weapons attack in Syria from Sellstrom, who will present the report to U.N. Secretary-General Ban Ki-moon Sunday. Ban said Friday that the report would be "overwhelming" in showing that chemical weapons were used.

U.N. spokesman Farhan Haq has called the report an "evidence-based narrative," implying to many that there will be clues to the responsibility of the attacks, such as signatures of delivery weapons, spent rocket casings and the type of chemical weapons used.

If the report points to accountability by the Assad government, there may be more discussion of a referral to the International Criminal Court, a Security Council permanent-member diplomat said.

The next steps agreed to in the U.S.-Russian framework are that, "in the next few days," the two countries would submit a draft resolution to the Organization for the Prohibition of Chemical Weapons' executive council and then pass a U.N. Security Council resolution "that reinforces" the group's decision.

It also asks Ban to submit recommendations on an expedited basis to the Security Council on what the U.N. role will be. The U.N. or the OPCW may be asked to provide scores of troops to protect the staff involved in the implementation of the agreement.

On Thursday, U.N. Under-Secretary-General for Peacekeeping Operations Herve Ladsous said that, if asked, "we will do our best with the support of contributing countries," adding "we have been doing some planning in order to react."

Kerry and Lavrov will meet on the sidelines of the U.N. General Assembly later this month. President Obama is scheduled to address the assembly Sept. 24; Russian President Vladimir Putin is not expected to attend.

A Geneva peace summit on Syria is still being discussed. Several U.N. diplomats see the new developments as groundshifting and are waiting to hear from U.N. and Arab League special envoy Lakhdar Brahimi.

Referring to the ongoing civil war, Ban on Friday said that Assad "has committed many crimes against humanity."

"This may be the beginning of a realization by Russia that a transition is in the cards," a Security Council non-permanent-member diplomat said, "and, therefore, an international conference is a must."