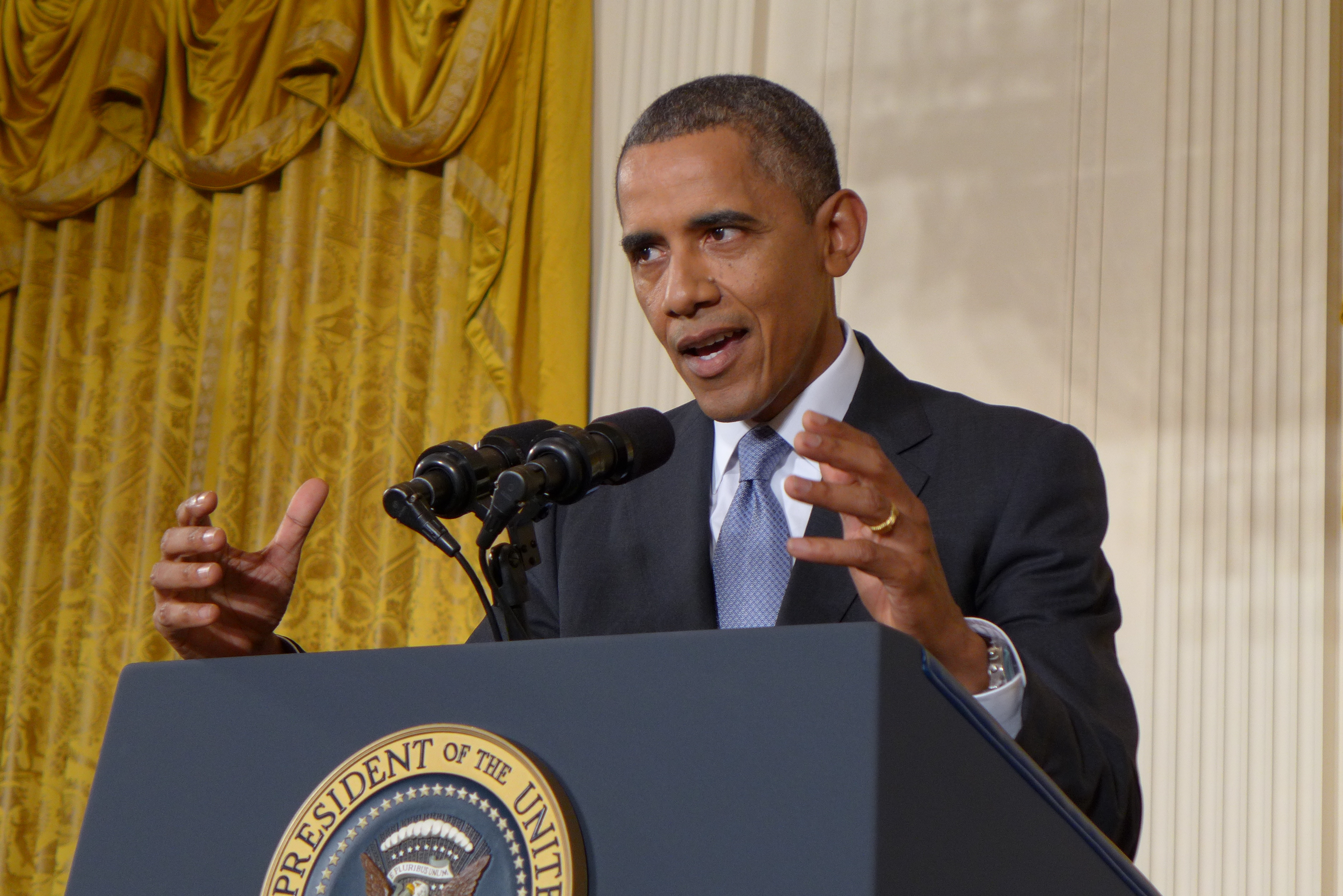 Facing little enthusiasm from Congress or the public for his proposal to launch a military strike against Syrian President Bashar Assad's regime for its alleged use of chemical weapons, President Obama on Tuesday will make his most aggressive efforts to date to convince America that military action would be justified.

The president will meet with Senate Democrats and Senate Republicans behind closed doors during their respective weekly policy luncheons to discuss his proposal. On Tuesday night, he will deliver a televised address to make his case to the nation.

Meantime, Syria's foreign minister said his country welcomed a proposal from Russia to avert U.S. military action by placing its chemical weapons under international control and dismantling them quickly.

In an interview with "CBS Evening News" anchor Scott Pelley, Mr. Obama called the proposal a "potentially positive development" that could resolve his concerns over Syrian President Bashar Assad's use of the weapons stockpile.

"Let's see if they're serious," Mr. Obama said in the one-on-one interview from the White House. "But we have to make sure that we can verify it and enforce it, and if in fact we're able to achieve that kind of agreement that has Russia's agreement and the [United Nations] Security Council's agreement, then my central concern in this whole episode resolved."

The president said it would be premature at this point to detail the terms of an agreement that he would accept, but he said the U.S. will be discussing the idea this week with Russia and the rest of the international community.

Mr. Obama added that negotiations over Syria's chemical weapons would not have reached this point had it not been for the pressure the U.S. has placed on the Assad regime.

"I don't think that we would've gotten to the point where they even put something out there publicly had it not been and... if it doesn't continue to be a credible military threat from the United States."

White House spokesman Jay Carney told CBS News' Peter Maer that "we have to be skeptical but cautiously optimistic because this is a positive development," pointing out, however, "this is not something you can simply take the Assad regime's word on."

Sen. John McCain, R-Ariz., who backs a military strike on Syria, told "CBS This Morning" that "we have to see how this plays out."

"Put me down as extremely skeptical. But to not pursue this option would be a mistake," he added.

In the interview with Pelley, Mr. Obama also explained that the U.S. should intervene militarily both for humanitarian reasons and for security reasons.

"We should all be haunted by those images of those children that were killed," Mr. Obama said, referring to video evidence that around 400 Syrian children were killed by a chemical weapons attack. "But more importantly, we should understand that when we start saying it's okay to, or at least that there's no response to the gassing of children, that's the kind of slippery slope that leads eventually to these chemical weapons being used more broadly around the world. That's not the kind of world that we want to leave to our children."

A newCBS News poll shows that six in 10 Americans oppose military air strikes against Syria, and a majority, 56 percent, disapproves of how Mr. Obama is handling the matter. Only 14 percent of Americans say the administration has explained its goals for a strike, while 79 percent say it has not.

Mr. Obama told Pelley that he doesn't expect his remarks Tuesday night to "suddenly swing the polls wildly in the direction of another military engagement."

"If you ask the average person, including my household, 'Do we need another military engagement?' I think the answer generally is going to be no," he said. "But what I'm going try to propose is, is that we have a very specific objective, a very narrow military option, and one that will not lead into some large-scale invasion of Syria or involvement or boots on the ground."

The president's remarks on Tuesday will not only serve to persuade the public but also lawmakers wary of authorizing a military strike that the public does not support. The Senate was expected to take a procedural vote on authorization on Wednesday, but Senate Majority Leader Harry Reid, D-Nev., announced Monday night that he was delaying the vote to give Mr. Obama more time to make his case.

Sen. Bob Corker, R-Tenn., a top Republican on the Senate Foreign Relations Committee, said to CBS News that in a Sunday night meeting, he told the president that those remarks "have not helped build support in Congress for an authorization."

Corker said, "Therefore, I reiterated to him the importance of Tuesday night's speech, in which he must show real leadership and make the case for why the kind of limited military action he's asked Congress to authorize is necessary."

According to a CBS News estimate, only about one in 10 members of Congress are currently in favor of military action or leaning towards supporting it. At least one senator, Sen. Barbara Mikulski, D-Md., said Monday she would support the resolution, while a handful said they would not support it.

Sen. Heidi Heitkamp, D-N.D., announced her opposition to military force and said she would instead join with Sen. Joe Manchin, D-W.V., to put forward an alternative resolution endorsing a diplomatic response to Assad's alleged use of chemical weapons.

Members of the president's cabinet -- past and present -- also made the case Monday for a military strike.

Former Secretary of State Hillary Clinton announced Monday that she supports Mr. Obama's call for a military strike on Syria and urged Congress to vote to back him. She also said she could support the Russian proposal for Syria to avert a U.S. military strike by placing its chemical weapons under international control and dismantling them quickly -- as long as it's not a delaying tactic.

"If the regime immediately surrendered its stockpiles to international control as was suggested by Secretary Kerry and the Russians, that would be an important step," Clinton said. "But this cannot be another excuse for delay or obstruction, and Russia has to support the international community's efforts sincerely or be held to account."

The Russian proposal, put forward by Russian Foreign Minister Sergey Lavrov, came hours after Secretary of State John Kerry said Assad could resolve the crisis by giving up "every single bit" of his arsenal to the international community by the end of the week. While Clinton suggested Kerry's remarks were in sync with the Russian proposal, State Department spokeswoman Jen Psaki on Monday said that the secretary of state was "making a rhetorical argument about the impossibility and unlikelihood of Assad turning over chemical weapons he has denied he used."

A senior State Department official told CBS News that in a phone call with Lavrov Monday, Kerry stressed that his comments were rhetorical and expressed serious skepticism over the Russian plan. He made clear that the administration had no intention of delaying its efforts to win congressional approval for military action.

Russian and U.S. officials in fact discussed the idea as far back as May, according to a State Department official, when Kerry visited Moscow, but Obama administration officials dismissed it then. These previous discussions, however, were prior to the threat of U.S. military action.

A senior administration official separately confirmed to CBS that Russian President Vladimir Putin also raised the proposal with Mr. Obama during a brief meeting on the sidelines on the G-20 economic summit last week. Mr. Obama, however, did not feel the need to offer any reaction until the proposal was raised publicly.

At a White House press briefing Monday, Deputy National Security Adviser Tony Blinken told reporters, "We want to take a hard look at the proposal," adding, "We would welcome a decision and action by Syria to give up its chemical weapons."