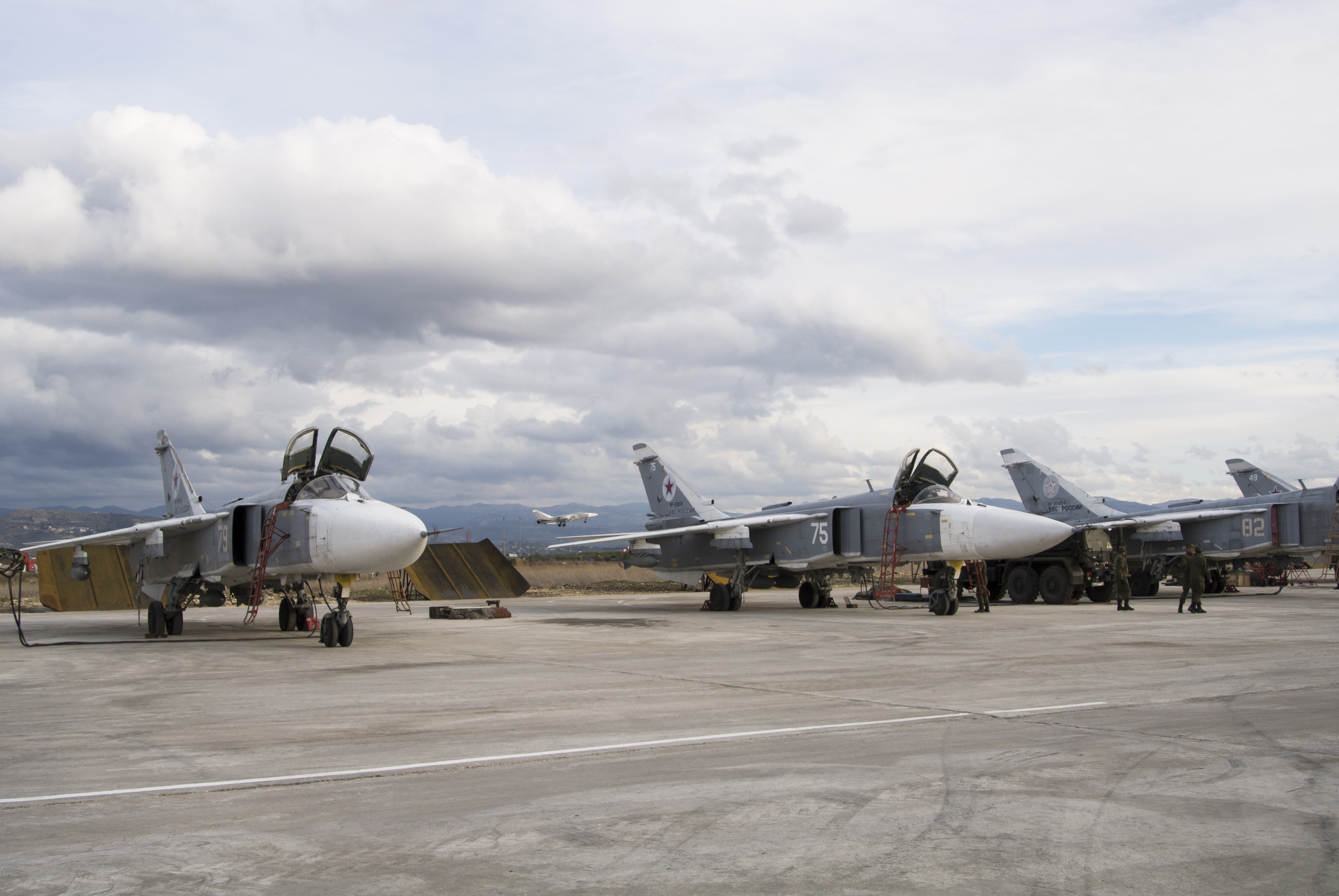 HEMEIMEEM AIR BASE, Syria -- Dozens of Russian warplanes sat idle Tuesday on the tarmac at this Russian air base in Syria on the fourth day of a cease-fire brokered by Moscow and Washington.

The apparent lull in action witnessed by the AP on a trip to the base, which was organized by the Russian defense and foreign ministries, contrasts with the hectic operation AP reporters saw here on a previous visit in January.

The cease-fire that began at midnight Friday has brought a notable reduction in hostilities for the first time in the five-year war that has killed more than 250,000 people, displaced half of Syria's population and flooded Europe with refugees.

But the truce has remained highly fragile with violations reported in many areas with the opposition and the Syrian government blaming each other.

The Islamic State of Iraq and Syria (ISIS) and al Qaeda's branch in Syria, Jabhat al-Nusra or the Nusra Front as it is also known, are excluded from the truce.

The Russian military said Monday that its warplanes struck Nusra targets north of Aleppo. It also said that groups which have declared their adherence to the cease-fire are not being targeted -- a remark reinforcing Russia's repeated denials of targeting moderate rebel groups. The U.S., Western-backed rebels and opposition groups that monitor the five-year conflict have accused Moscow of hitting moderate rebels.

During the five-month Russian air blitz that began on Sept.30, each jet flew several combat sorties on an average day, amounting to an impressive total of more than 6,000 missions.

In the capital city of Damascus on Tuesday, CBS News correspondent Elizabeth Plamer said it was largely quiet, with no airstrikes heard overnight. There was, however, smoke rising from the opposition-held eastern suburbs of Damascus. It wasn't possible to discern whether it was from army artillery, or rebel mortars.

The Russian Defense Ministry said late Monday that the cease-fire was largely holding despite sporadic violations. Lt. Gen. Sergei Kuralenko, who heads the cease-fire coordination center at the Russian base in Syria, expressed satisfaction with what he described as a good level of coordination with his U.S. counterparts in Amman, Jordan.

Russia and the U.S. have agreed to exchange information about opposition groups abiding by the truce and jointly tackle any possible violations.

For President Vladimir Putin, the cease-fire deal offers a chance to capitalize on a successful air campaign that has helped Syrian President Bashar Assad's military reverse the tide of war and make significant gains near Aleppo and in several other areas.

The U.S.-Russian-brokered truce agreement achieves Putin's key strategic goal of having Moscow appear as an equal partner of Washington in tackling the Syrian crisis.

The deal raises Russia's global clout, allows Putin to appear as a peacemaker and marks the first time Russia has engaged the U.S. in a military-to-military dialogue since the start of the Ukrainian crisis two years ago.

By exchanging target information with the U.S., Moscow also hopes to deflect Washington's criticism that it was striking moderate opposition groups instead of its declared target, ISIS.

The truce comes at a time when Assad's military has cut most supply routes to Aleppo, Syria's largest city and its commercial capital before the war. The city, the capital of Aleppo province, has been split into government- and opposition-controlled parts since 2012.

In one of Syria's other large cities, Homs, south of Aleppo closer to the capital, the Army has regained control from rebels, and as Palmer saw this week, residents are even daring to begin rebuilding their lives.

The truce has boosted the confidence of Syrians living in areas where it has actually calmed the fighting, with many expressing hope that the fragile cease-fire can be built upon for a broader, longer-lasting peace deal.

The Syrian army's successes around Aleppo and in other areas have strengthened Assad's hand ahead of a new round of peace talks in Geneva, tentatively set for next week.

The negotiations broke down a few weeks ago before starting in earnest with the opposition demanding an end to the Russian airstrikes as a key condition to proceed.

The cease-fire's success is seen as essential for resuming peace efforts.

The Hemeimeem air base is located in the coastal province of Latakia, the heartland of Assad's Alawite minority, at a safe distance from the front lines. Still, the base's personnel maintain the usual strict security routine, with soldiers armed with assault rifles deployed around its facilities and helicopter gunships buzzing the perimeter to spot any possible threats.

Massive S-400 air defense missiles stand towering over the middle of the field, a forceful message to Turkey, which downed a Russian jet at the Syrian border in November.

Putin ordered the long-range S-400s, capable of striking aerial targets 250 miles away, deployed to the base in response. The Russian military has warned it will destroy any target that threatens its warplanes.

The cease-fire deal has reduced the threat of a possible showdown between Russia and Turkey. Ankara was upset by an offensive by Syrian Kurdish forces north of Aleppo and was mulling possible military action in Syria.