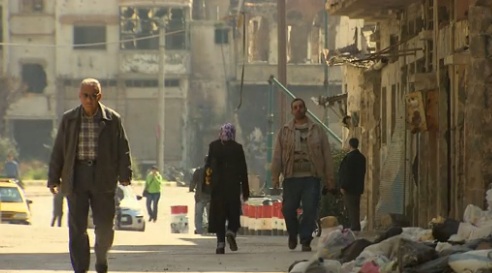 HOMS, Syria -- The United Nations said Monday the cease-fire in Syria is holding for the most part. But a hotline set up by the U.S. State Department for Syrians to report violations has been ringing off the hook.

The Civil War has left many of Syria's cities in ruins.

CBS News' Elizabeth Palmer has gotten rare access to Homs, a city that once had as many residents as Philadelphia. Now, it's just a fraction of that.

After four years, and mega-tons of explosives, the Syrian Army finally took back the city of Homs from opposition fighters.

But several rebel units escaped into the suburb of al Waar, where they tried to make a last stand.

In the end though, the violence was too much.

Under siege and out gunned, the rebels caved in and agreed to talk.

The Syrian Army wouldn't allow CBS News in, but they do allow the women out to get medical care and shop for food.

Now there are formal negotiations going on with the government, the women tell CBS News. Life has improved. The siege has ended and electricity and water are back on, they said.

Supplies are flowing in too. Though every single box is checked by the military, and every canister of gasoline probed for hidden weapons.

In December, six bus loads of rebels and their families struck a deal for safe passage out of al Waar to an opposition area further north.

That leaves about 1,000 left -- stuck -- and still trying to hammer out the the terms of their defeat.

There have been several of these, call them stalemates, call them mini-truces, across the country in the last couple of years. They don't always go smoothly, some are more successful than others, but in the end, they almost certainly save lives.