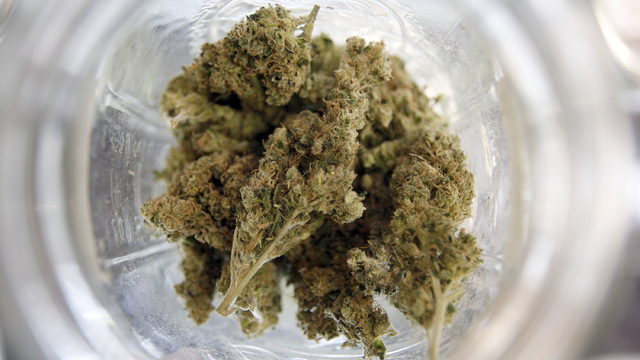 While use of synthetic pot is down among high schoolers, more teens are smoking real marijuana, a government survey revealed.

Health officials are concerned, as the survey also found fewer teens are worried about the potential dangerous effects from marijuana use.

The National Institute on Drug Abuse and the National Institutes of Health released the 2013 Monitoring the Future survey on Wednesday. The annual survey asks eighth, 10th and 12th graders across the country about their drug use history and how they feel about illicit drugs. This year’s survey involved results from 41,675 students from 389 schools.

Synthetic marijuana -- often sold under the brands K2 or Spice -- was not as popular as it used to be among 12th graders. The survey showed 7.9 percent of high school seniors surveyed admitted to using it this year, while 11.9 said they smoked it last year.

“Fake” pot -- which is made from different herbs and "designer" synthetic cannabinoid compounds -- can still be dangerous. About 11,400 people went to the to the emergency room in 2010 due to abusing the substances.

Spice and several other synthetic drugs were banned last year by the Drug Enforcement Administration. But many manufacturers, mostly from China, are still getting the products legally into the United States, CBS News correspondent Holly Williams reported recently.

Daily pot use among high school seniors was recorded at 6.5 percent, up 4 percent over the last 20 years. Overall, 23 percent of seniors, 18 percent of 10th graders and 12 percent of eight graders lit up in the month before being surveyed.

The survey's authors are concerned, because less than 40 percent of high school seniors believe that marijuana use will have negative effects. Those numbers are the lowest since 1978.


The consequences can be especially bad for young people who decide to toke. A December study found that former pot smokers who used during their teenage years had brain structure changes similar to what was seen in schizophrenics, including in areas that control for memory. Other studies have linked teen marijuana use to drops in IQ, but that evidence has been refuted by some researchers.

In addition, Dr. Margaret Haney, director of the Marijuana Research Lab in the department of psychiatry at Columbia University Medical Center, previously told CBS News that weed may be addicting for about 10 percent of users. They may experience withdrawal symptoms including trouble sleeping, irritability, anxiety and food consumption differences when they stop smoking.

She said she expects those addiction rates to rise as more states legalize recreational use of marijuana. Colorado and Washington both legalized recreational use following November 2012 elections.

“We should be extremely concerned that 12 percent of 13- to 14-year-old s are using marijuana,” NIDA Director Dr. Nora D. Volkow said in a press release. “The children whose experimentation leads to regular use are setting themselves up for declines in IQ and diminish ed ability for success in life.”

Part of the concern is because marijuana today is stronger than it used to be. In 1990, marijuana had about 3.35 percent Tetrahydrocannabinol (THC), the active ingredient that gets users high. In 2013, pot contained a little less than 15 percent THC on average.

“This is not just an issue of increased daily use…. Daily use today can have stronger effects on a developing teen brain than it did 10 or 20 years ago,” Volkow said.

Over the last five years, opioid, alcohol and cigarette use also declined, according to the survey. Vicodin and salvia use was down amongst the oldest teens surveyed, as well as the use of inhalants by eighth graders. Cocaine, heroin and methamphetamine abuse levels remained low among students.

However, researchers were startled to find that non-medical use of Adderall has increased over the last four years. About 7.4 percent of high school seniors said they used Adderall recreationally in 2013. The researchers believe that teens think that using the prescription ADHD drug will help their grades, and there is some evidence they are using the pills to get high.

The researchers pointed out that the survey only involved teens who are still in school. Twenty-five percent of the class of 2010 did not graduate, and heavy marijuana use is often associated with high school drop outs, the researchers said.