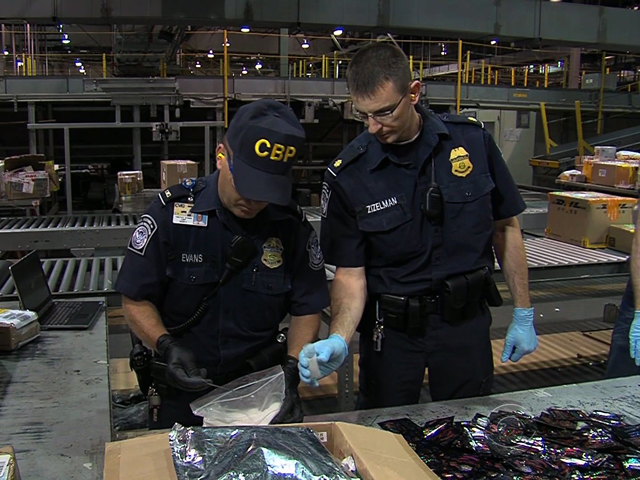 SCOTTSDALE, Ariz. – Recreational drugs are being cooked up in labs overseas.

Since 2005, emergency-room cases are up 128 percent for just one of these drugs, known on the street as Molly. Molly caused more than 10,000 emergency-room admissions in 2011.

Many of these so-called designer drugs are being imported legally in amazing quantities.

It's the biggest drug haul of Special Agent Doug Coleman's career -- worth millions of dollars on the street. Boxes reach to the ceiling of the storage room and down the aisles.

It's known as Spice, a synthetic form of marijuana, originally developed by medical researchers, and now sold by drug dealers.

It's one of a new generation of synthetic drugs -- made from chemical compounds -- and designed to mimic the effects of marijuana, cocaine or methamphetamine.

But because many of the ingredients are legal they can be freely imported into the United States.

Where are most of these synthetics coming from?

"For the most part China is the main source," Coleman said. "They were probably the first ones to start it. Once they saw there was a big demand for it, they ramped it up."

Posing as buyers, we found a Chinese manufacturer online within minutes.

The website for KaiKai Technology Co., Ltd, looks like a legitimate business selling chemical compounds -- but they offered to ship us two pounds of synthetic marijuana for $2,500.

"They can't do anything," Coleman said. "If it's one of the legal substances coming in, there's nothing that they can do."

But the manufacturers are outsmarting the government. As soon as one drug is banned, they change their chemical formula and create a new drug that's still legal.

Do a lot of young people think that legal means safe?

In fact as police videos show, the new drugs are dangerous and sometimes deadly. One man can be seen writhing on the ground having a horrific reaction to a synthetic drug as a police officer tries to calm him.

Susan Wadsworth's son Noah was an honor student and a talented musician. On a night out with friends in January, he took a drug called N-bomb which mimics LSD, quickly lost consciousness and died.

"You can't even imagine the horror of hearing that news," Wadsworth said.

What did she think when she discovered that the drug that killed her son was legal?

"I was shocked. Before this happened I didn't know anything about synthetic drugs," Wadsworth said. "It's too risky. It's literally playing Russian roulette."

N-bomb was so new that it took toxicologists three months to work out what had killed Noah.

"It's always a cat-and-mouse game," Coleman said. "This is just a more advanced type of cat-and-mouse because now we've got chemists manufacturing synthetic drugs as opposed to cartel members trafficking heroin, or coke, or methamphetamine."

The Chinese manufacturer told us he's already switched to making new drugs – that are legal in the United States and selling well.