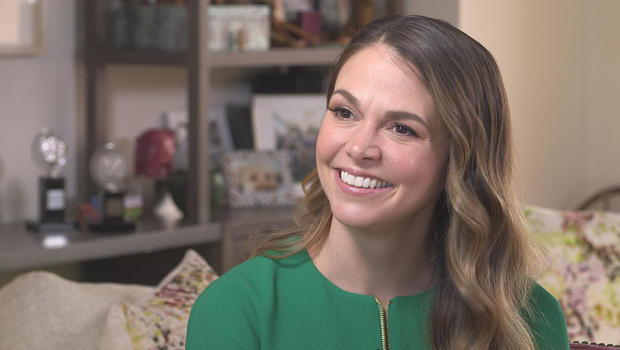 ON BROADWAY is where actress Sutton Foster got her first big break many years ago -- and she’s still wowing them on stage, while also finding time to talk to our Mo Rocca:

“You’re gonna go out there a youngster but you’ve got to come back a star!”

It’s a showbiz myth as old as showbiz itself: the understudy who overnight becomes a star. But it actually happened to Sutton Foster.

In 2000, Foster was the 25-year-old understudy to the lead in the Broadway-bound musical “Thoroughly Modern Millie,” when director Michael Mayer called her.

“He said that the woman playing Millie has left the show, and the role of Millie is yours if you want it,” Foster recalled. “I was on the other line with the boyfriend at the time, and I was, like, ‘What?’ And, like, clicked off with Michael Mayer, went back to the boyfriend, ‘I have to call you back!’”

It was just one week before opening night.

But it was a risk that paid off. Foster went out there an unknown and came back with her first Tony Award.

“One of the things that I’m most proud of is that the opportunity came, and I was ready, meaning I was prepared, I knew my stuff, I worked really hard, and I stepped in,” she said.

Sutton Foster was born in Georgia and started dancing when she was four years old. Her father worked for General Motors; her mother, whose dream of becoming a model never worked out, gently nudged Sutton and her older brother, Hunter, onto the stage.

When Mrs. Foster saw that a local theater company was producing “Annie,” she knew who should play the title role.

“My mother said, ‘You should audition,’” Foster told Rocca. “And I was, like, ‘I don’t want to, I wanna play with my friend, Bethany!’ And she was over. And my mom’s like, ‘You should go, and Bethany can come, too.’  And we went to the audition, I had to sing. And my mom said the room got really quiet. And then they cast me as Annie.”

“Would you say that your mother was a stage mother?” Rocca asked.

“I wouldn’t say my mom was a stage mom because she wasn’t like Mama Rose. It wasn’t like that. But I will say that she was the one who encouraged us to go to the library and take out musicals, so we could listen. ‘Cause we didn’t what Broadway was. I was, like, ‘Les Mis’? What’s ‘Phantom’?’ She didn’t know, so she wasn’t aggressive, you know. ‘Stage mom’ has such a negative connotation to it. But she was definitely responsible.”

And it was Foster’s mother who saw the ad to audition for the TV show Sutton was obsessed with: “Star Search.” She came in second, “out of two people!” she laughed.

It’s that kind of gumption that’s endeared Foster to audiences in show-stopping role after role after role, including “Little Women,” “Shrek the Musical,” and “The Drowsy Chaperone.”

She won her second Tony in Cole Porter’s “Anything Goes.”

Part of her performance as Reno Sweeney was an impossible-to-believe eight-minute tap dance number. “I kept thinking it would get easier, and it never did. Every night I thought my face was gonna explode! But it never did, which was good.”

Foster can sing and she can dance. But what sets her apart is her acting. “A lot of people say, ‘What’s more important: acting, singing or dancing?’ And I say, always acting. ‘Cause singing without acting is just noise. Dancing without acting is just arm movement. I don’t feel like I’m just moving around and doing, like, fancy footwork. Same thing can go with singing; someone can sing super-high notes, but if it’s not based in any reality or any purpose, then it’s just showboating.”

And it’s the acting that definitely plays lead in her current role as Charity Hope Valentine, the dance hall hostess searching for love in the New Group’s Off-Broadway production of “Sweet Charity.”

The part was made famous on stage by Gwen Verdon, and by Shirley MacLaine in the 1969 movie. As played by Foster, Charity is surprisingly funny, and no less poignant.

“What is Charity doing wrong that she has this string of relationships, and she can’t quite seem to get it right?” Rocca asked.

“Charity is desperate to be saved -- she wants to be saved from this life that’s she’s in,” Foster said. “She thinks maybe a man will save her. It doesn’t matter who the guy is. If it’s a guy, he’s the one!”

Charity is a woman struggling to find out what will make her happy. Foster faced a similar quandary after her divorce from actor Christian Borle in 2009.

“I kept equating it to, like, someone took my purse and dumped it out on the sidewalk. And it was all my stuff everywhere,” she laughed. “And for three years I was sludging through mud to sort of rebuild myself and my relationships.”

“That’s a very evocative image, [to] dump your purse out. It sounds like something that would happen to Charity?” Rocca asked.

“Totally. Yeah, Charity and I go way back!” Foster laughed. “What’s interesting is that I know her, because I think I have been her, but luckily, I don’t feel like I’m her now.”

Foster is now married to writer Ted Griffin. They live in New York where she stars in the TV comedy “Younger.” She plays a 40-something mom passing herself off as a 26-year-old to get work.

But for Sutton Foster, it isn’t so big a stretch.

Rocca said, “A word that was used to describe you a lot early on was ‘plucky.’  How did you feel about that word?”

“I mean, it’s pretty right on,” she laughed. “Especially in my youth. In my youth! I’ve been, like, 15 my entire life. My tag line on my phone says, ‘Sent from the land of puppy dogs and rainbows.’ I’m like a little Pollyanna. I look at the world with rose-colored glasses. I’m incredibly hopeful. In many ways still very naïve. I think a lot of that has helped me. My sort of naiveté has sort of gotten me in trouble at times, but I haven’t stopped myself from doing things.”

To watch a trailer for “Sweet Charity” click on the video player below.

“So you get to live in New York City where you work on the stage, just a couple miles away, and do a TV show in town. You’re living the dream!” said Rocca.