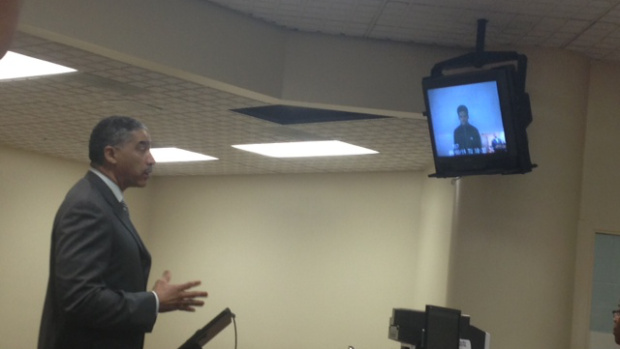 DETROIT - Three people, including a 17-year-old, were ordered held on $500,000 bond Tuesday in the beating of a Detroit motorist who accidentally struck a 10-year-old boy, then stopped to check on him.

He was arrested Saturday along with a 16-year-old boy who is being questioned in the case.

CBS Detroit reports that 30-year-old Wonzey Saffold and 24-year-old James Deontae Davis were arrested Monday for their alleged involvement in the beating, which occurred April 2 after the beating victim, Utash, got out to help the boy he'd hit with his pickup truck.

Both were arraigned Tuesday afternoon on the same charges as Wimbush, and also ordered held on $500,000 bond.

"It's excessive, especially when the young man has no record and he voluntarily surrendered," Upshaw told the station. "At the same time, it's not alleged that he had a weapon or a gun. But understand, we are all remorseful that the victim was hurt."

Police said that Utash was on his way home from his job as a tree trimmer last Wednesday when he struck the 10-year-old who had stepped into the roadway, according to the station. Utash stopped and got out of his vehicle to check on the child and was severely beaten by a mob of about 10 to 12 people, police said.

A witness told CBS Detroit that one of the attackers said, "You hit my nephew, you're going to die."

Local nurse Deborah Hughes intervened to help Utash, who was punched, kicked and stomped on repeatedly. She told the station that dozens of people stood and watched as the victim was beaten.

Utash remains hospitalized in critical condition. The boy who was hit has been treated for a broken leg.

Investigators would not say if they thought the attack was racially motivated; Utash is white and his attackers were all described as black, the station reports.

Utash does not have medical insurance, and his family has set up an online fundraiser to help pay for medical bills which has already raised over $130,000, according to CBS Detroit.

Police are searching for additional suspects.