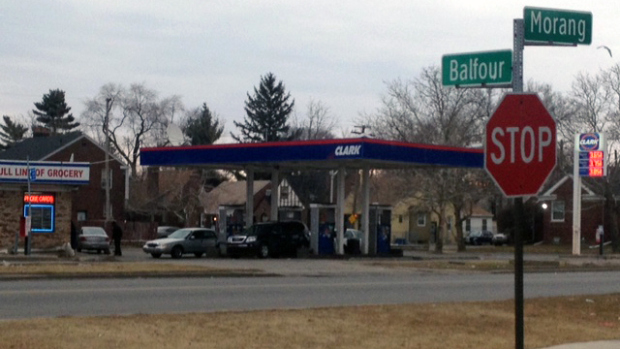 DETROIT - A 54-year-old man remains in critical condition two days after a neighborhood mob on Detroit's east side brutally beat him when he stopped to help a boy he struck with his pickup truck.

Police weren't releasing the man's name Friday, but relatives have identified him as Steve Utash, who works as a tree-trimmer.

Utash struck 10-year-old David Harris when the boy stepped into traffic Wednesday afternoon. Utash suffered severe head injuries when at least a half-dozen people attacked him as he tried to help the boy. According to CBS Detroit, the beating was so brutal, Utash was rendered unconscious.

Sgt. Michael Woody says the driver is from the Detroit suburb of Roseville and wasn't at fault in the accident.

"Our preliminary investigation shows the child stepped in front of his vehicle," Woody told CBS Detroit. "[The driver] did exactly the right thing. He stopped his vehicle, he got out and the tried to render aid to a small child."

Woody says investigators Friday were canvassing the neighborhood, seeking identities of the attackers.

Relatives of the 10-year-old told The Associated Press he was recovering. CBS Detroit reports the boy suffered a broken leg.

Utash's son Joseph told the station Thursday night that his father remains in a medically induced coma and is nearly unrecognizable due to his injures. He also said his father's wallet and cell phone were stolen from his truck.

"If it went on any longer, my dad wouldn't be in the hospital right now, he would be in the morgue. The way he looked, I am surprised that he is alive," Joseph Utash said.

Michigan State Sen. Alberta Tinsley Talabi told CBS Detroit the incident appears to have racial overtones. Based on witness accounts, the attackers were African American, according to the station. Utash is white.

Joseph Utash agrees that the attack may have been racially motivated and even goes as far to say that his father may have been intentionally targeted.

"I've talked to one Detroit police officer and I think that, personally in my own heart, I think it was all a setup from the gate, meaning that my dad's been driving up and down Morang for 15, 16 years working for the same company and they know he has a job, they know he has money and they robbed him," Joseph told the station.

Police declined to comment on the speculation and have not said whether they believe the attack was racially charged.

Anyone who witnessed the attack, can identify the assailants, or who has any information about this case is urged to call Detroit police at 313-596-1616. Tips can be made anonymously to Crime Stoppers at 1-800-SPEAK-UP.