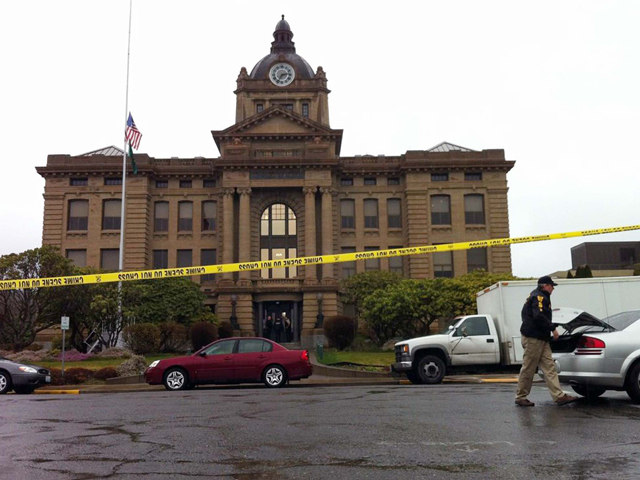 (AP) SEATTLE - Police in Washington state have arrested a 34-year-old man accused of stabbing a judge and shooting a sheriff's deputy in a courthouse struggle, ending a manhunt that spanned two counties.

Grays Harbor County Undersheriff Rick Scott says Steven Daniel Kravetz was taken into custody without incident Saturday afternoon by authorities in Olympia. He did not have further details.

Scott identified Kravetz earlier in the day as the lone assailant in Friday's courthouse attack in Montesano, Wash., that wounded Judge David Edwards and Deputy Polly Davin. Investigators believe he called his mother for a ride out of the area after the attack.

Dozens of law enforcement officers searched for the suspected attacker Saturday, before he was located in Olympia

Olympia Police Lt. Jim Costa told the Olympian newspaper that he gave himself up voluntarily shortly after 1:30 p.m. No one was injured. He was taken to Mason County jail.

"He acted alone and we know him to be the assailant," Scott said. "We're operating under the belief that he's still armed."

Kravetz fled the courthouse with the officer's .45-caliber handgun after the attack and showed up about an hour or so later at the office of his former attorney and asked to the use the phone, Scott said.

The attorney had represented Kravetz a number of years ago and "didn't know anything was up," Scott said.

Investigators believe Kravetz called his mom, identified as Roberta Dougherty, at about 3 p.m. and that she apparently gave him a ride out of the area, Scott said.

"We don't know what her knowledge or involvement is," the undersheriff said.

Around noon Friday, the deputy responded to a report of a suspicious person at the courthouse and confronted a man, Scott said. During a struggle, she was stabbed with either a small knife or scissors.

The judge intervened, striking the assailant, who then stabbed him, authorities said.

Davin reached for her gun, but it was wrestled away by the man, who shot twice, striking her in the shoulder before fleeing, Scott said.

Both the judge and the sheriff's deputy were treated and released from a hospital hours after the attack.

"Why he was at the courthouse yesterday remains a mystery," Scott said, adding that his motive is unclear.