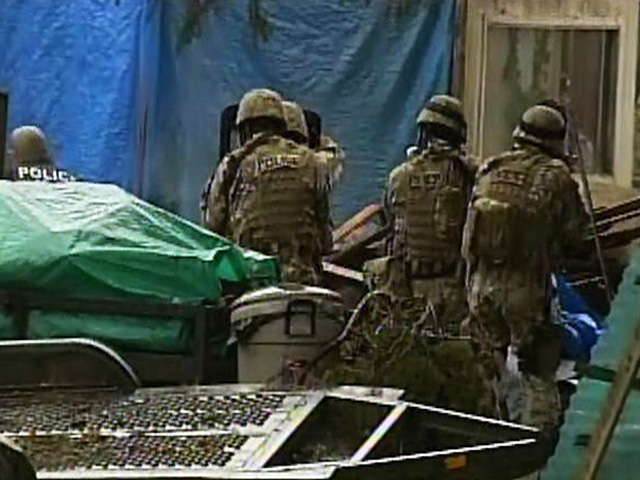 (AP) MONTESANO, Wash. - A man stabbed a judge and shot a sheriff's deputy with her own weapon in a courthouse struggle Friday, said authorities who were searching for the assailant.

The suspect might still have the officer's gun and was last seen running from the Grays Harbor County Courthouse, said Undersheriff Rick Scott. The motive for the attack in the coastal town of Montesano, about 90 miles southwest of Seattle, wasn't clear.

"The suspect remains at large. We don't not have a suspect in custody," said Scott as reported by CBS affiliate KIRO Seattle.

Judge David Edwards and Deputy Polly Davin were treated and released from a hospital hours after the attack, which prompted a lockdown of the small town of about 4,000 residents. The lockdown on schools was later lifted, but afterschool activities were canceled.

Scott said Davin responded to a report of a suspicious person at the courthouse and confronted a man. During a struggle, she was stabbed with either a small knife or scissors, he said. The judge intervened, striking the assailant, who then stabbed him, authorities said.

Davin reached for her gun, but it was wrestled away by the man, who shot twice, striking her in the shoulder before fleeing, Scott said.

The attack comes less than three months after Edwards had joined a lawsuit filed over county budget cuts he said were making the courthouse less safe. The courthouse is not equipped with a metal detector and there was no on-site security on Friday, Scott said.

"Our courthouse is one of the few of its size that doesn't have full-time security," he said. "We just had a discussion about courthouse security less than a week ago. The need for that is certainly illustrated by situations like this."

There have been a number of dangerous episodes inside the courthouse over the last two years, including a defendant charging at one judge in a courtroom and a man armed with a knife asking directions to the office of a judge, the lawsuit filed in December said.

"Anyone can enter the courthouse carrying weapons," the lawsuit said.

Kathie Wilson, who works at a law firm near the courthouse, said her office locked its doors after getting a call from her daughter-in-law, who was locked in a school while picking up her child.

Edwards was appointed to Grays Harbor County Superior Court in 2007 by Gov. Chris Gregoire. He had been a private attorney, and had also served as a prosecutor in the late 1970s.

Davin is a former Daily World reporter who became a sheriff's deputy in 1998.