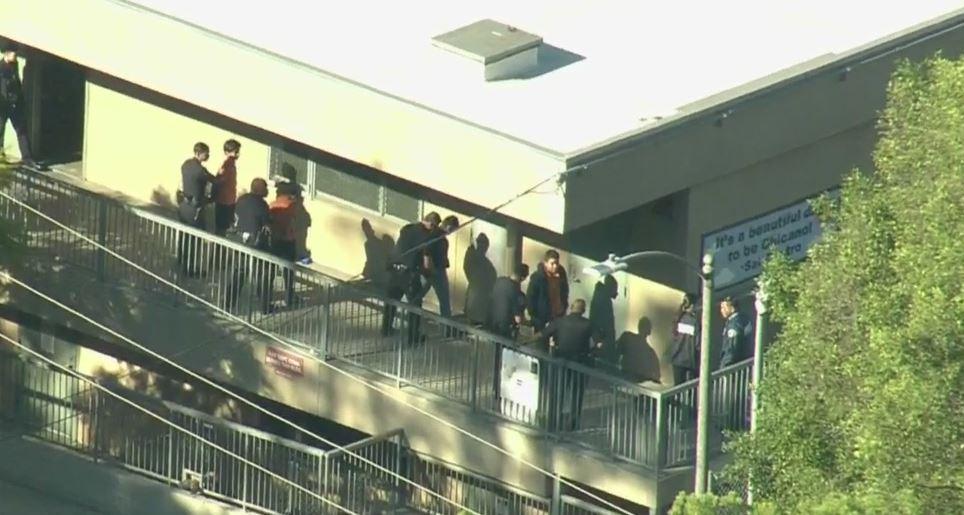 LOS ANGELES -- A Los Angeles police spokesman said Thursday that the shooting at a middle school that wounded four students was not intentional. Spokesman Josh Rubenstein said the 12-year-old girl arrested in Thursday's shooting was being booked on a charge of negligent discharge of a firearm on school grounds.

Twelve-year-old Jordan Valenzuela, a classmate, tells The Associated Press that he talked to her just after the shooting.

He says she was sobbing and kept repeating, "I didn't mean it." He says she told him that the gun was in her backpack and that it accidentally went off when she dropped the bag.

The shooting left one teenager critically wounded and three other children injured.

The Los Angeles Police Department confirmed via Twitter Thursday afternoon that the girl in custody is 12. Television news footage showed officers leading a girl with dark hair away in handcuffs at Salvador B. Castro Middle School, which is located on the campus of Belmont High.

"We know this is a very traumatic situation for everyone involved, particularly in that classroom," Los Angeles schools police chief Steven Zipperman said.

The victims are a girl and boy, both age 15, the station reports. The boy was shot in the head and is in critical but stable condition, said Capt. Erik Scott, a spokesman for the Los Angeles Fire Department.

"He was struck in the left temple area," Dr. Carl Chudnofsky told reporters. "He came in and was initially awake and alert and answering questions, but his condition did start to deteriorate somewhat… so the staff decided it was best to protect his airway, so he was intubated after arrival, and has been doing very well since that time."

Chudnofsky added that "no vital structures were traumatically injured."

The second most serious injury was the girl, who suffered a gunshot wound to the wrist, Scott said. She was listed in fair condition.

Three other people suffered minor abrasions, mostly injuries from glass to their head and face, Scott said -- a 30-year-old woman, an 11-year-old boy and a 12-year-old girl. Television news footage shows someone being loaded into an ambulance.

It wasn't clear how many people were in the classroom when the shooting happened.

A weapon has been recovered. Officials said they couldn't yet detail a motive and were continuing to investigate how the girl obtained the gun. Zipperman stressed that if the investigation determined the student obtained it from an adult in a home where it wasn't properly stored, there could be additional prosecution.

Spry said there was no further danger at the school.

Parent Claudia Anzueto, 41, said her 12-year-old son was crying when he used someone else's cellphone to call her. She said he told her he was in a classroom next to the classroom where the shooting happened, heard a gunshot and knew the suspect.

Anzueto says there are no metal detectors at the school and she's concerned for her son's safety.

"Not safe, not safe, very insecure," she said. "I fear for my son's life. You know what I mean, you really hear about things like this in the news, and just to hear that something like that happened so close to home, it scared the life out of me."

School officials say students at middle and high schools are subject to daily random searches for weapons using metal-detector wands. Officials have not said whether students at the school were subject to any weapons screening Thursday.

The school has about 365 students in grades 6 through 8 and most are Hispanic and many from low-income families.

The Los Angeles Times says at an event last month where good attendance certificates were presented, Principal Erick Mitchell said the campus is becoming a destination for families who want a smaller school setting. He said Castro emphasizes long-term goals such as college and career, and that has improved student behavior.