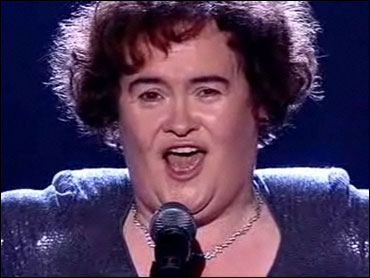 The 48-year-old church volunteer who rocketed to fame with her surprising performance on "Britain's Got Talent" arrived at Tokyo's international airport Tuesday to prepare for a guest appearance on Japan's premiere vocal variety show, which will be aired live on New Year's Eve by Japan's public broadcaster, NHK.

Boyle smiled broadly as she greeted a mob of photographers at the airport, but declined a request for an impromptu song, saying her fans would have to wait for the NHK show.

She is scheduled to sing her trademark "I Dreamed a Dream" from Les Miserables.

The NHK program, now in its 60th year, showcases the most popular singers of the year. Most of its guests are Japanese.

Boyle was runner-up in the British talent show, but her performance became a hit on YouTube and made her one of the biggest international celebrities of the year, with more than 120 million views.