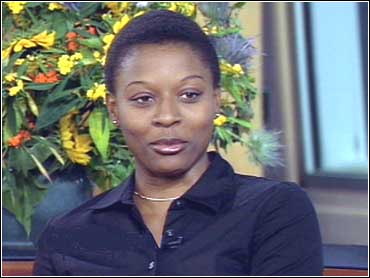 True friendship is hard to come by, especially when you're stranded on a deserted island with $1 million on the line. Wednesday night, the latest victim of the Survivor tribal council found that out the hard way.

Ramona Gray, a 29-year-old biochemist from Edison, N.J., is the latest contestant to be booted from the CBS adventure game show Survivor. One of those who voted her off was her teammate, Jenna, who hugged Ramona as she was disqualified.

"She voted the way she thought that she had to," Ramona says. "I've talked to Jenna, and I've quashed everything. I'm not mad."

Even though Jenna was acting like her friend right up until she voted her off?

"I don't think you could really trust somebody in an environment like that," says Ramona. "I'm non-trusting anyway. I did hold out hope that we would make a connection, that we would be friends. I think we'll keep in touch, and we have. But I don't think it's going to be the extent that I would hope it would be."

What about the hug? Was it phony around the tribal council after they voted and then she's hugging you? What was that about?

Sweeney watched Survivor for the first time Wednesday night. "I wanted to hate it," she says. "I wanted to be above it, and I ended up getting drawn in."

Poniewozik chimes in, "That's the experience. You despise yourself for watching, and you despise the show, yet you must look."

But Wells says she does not despise the show. She views it as a study of human nature, adding, "We're looking at civilization."

Ramona was sick for the first week on the island, partly because she was not drinking enough water and became dehydrated.

But she did muster up the courage to eat the bugs in competition and, when she was hungry enough, to eat rats.

"They have their own special flavor...Rat taste," says Ramona. "It wasn't chicken, (but) it was good."

Ramona looked so miserable. Was she as miserable as she seemed? Did she enjoy any part of her island adventure?

"I enjoyed the whole thing, believe it or not," Ramona asserts, adding that "the most miserable point" was the night it rained without stopping. "I didn't sleep at all. I was soaking wet. I had the rats in the hut with me. It was bad."

Ask her to describe some of her teammates in one word and here's what she says:

But tht doesn't mean there is a love connection between Ramona and Gervase -- unlike the one between Greg and Colleen, which Ramona terms "hot and heavy."

In reply to several questions from Early Show viewers, Ramona says she did write in her journal during her time on the island, and she is toying with the idea of writing a book. She was not scared at all during the game, and she thinks if they ever make a movie version of Survivor, Angela Bassett might be a good choice to play her.

What did she do when she got get off the island?

"Took a shower! It was cold water, but it was still soap and water," she recalls. "I took a shower for about 30 minutes."

Would she play Survivor again?

"Yes, even if there was no prize money," Ramona replies. "I wanted to try out for the Australia one. They said I couldn't."