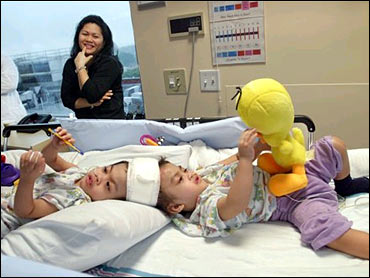 Two-year-old twins from the Philippines who were joined at the tops of their heads were surgically separated Wednesday night.

Doctors teased apart abutting portions of Carl and Clarence Aguirre's brains at 10:32 p.m. after completing an incision around their skull, said Steve Osborne, a spokesman for the Children's Hospital at Montefiore Medical Center.

The twins' head-to-head operating tables were then pulled apart slightly to give the medical team more room as they continued their work.

Wednesday's surgery climaxed a number of gradual operations over the past ten months, a departure from the more common marathon operations that have separated other conjoined twins.

The operation continued after the separation. Doctors planned to reconstruct a membrane that covered the boys' brains and then cover their heads with skin, some of it from tissue expanders that had been planted beneath their scalps.

Doctors have warned that it will be months before the twins' conditions and the success of the separation can be fully assessed.

In the past, separation was considered a success if both twins simply survived. But the hospital's goal for the boys, who have never been able to sit up, stand straight or look at each other's face, is "viable, independent lives."

During four major surgeries since October, the boys' separate-but-touching brains were gently pushed apart and the tangle of blood vessels they shared were cut and divided.

Between surgeries, the boys were given time to heal and to adapt to their rerouted circulation systems. Originally, veins near Clarence's brain were doing much of the circulation work for both boys, but scans showed dormant veins on Carl's side had "plumped up" and begun working in response to the surgery, lead surgeon Dr. James Goodrich said last week.

In Wednesday's operation, which began at 10 a.m., doctors cut a window into the skull and divided the last major vein the brothers shared, along with other blood vessels. About six hours into that procedure, they decided the boys were doing well enough to continue.

The doctors said last week that excessive bleeding or swelling in the brain would force a postponement.

The boys' mother, Arlene Aguirre, and grandmother, Evelyn Aguirre, were at the hospital throughout the operation, getting periodic updates from the doctors.

They had sent the feisty, dark-haired boys into the operating room with tearful kisses at about 7:30 a.m. Arlene Aguirre placed a small statue of the Virgin Mary on her sons' gurney, and it stayed with them, on an instrument cart, through the surgery.