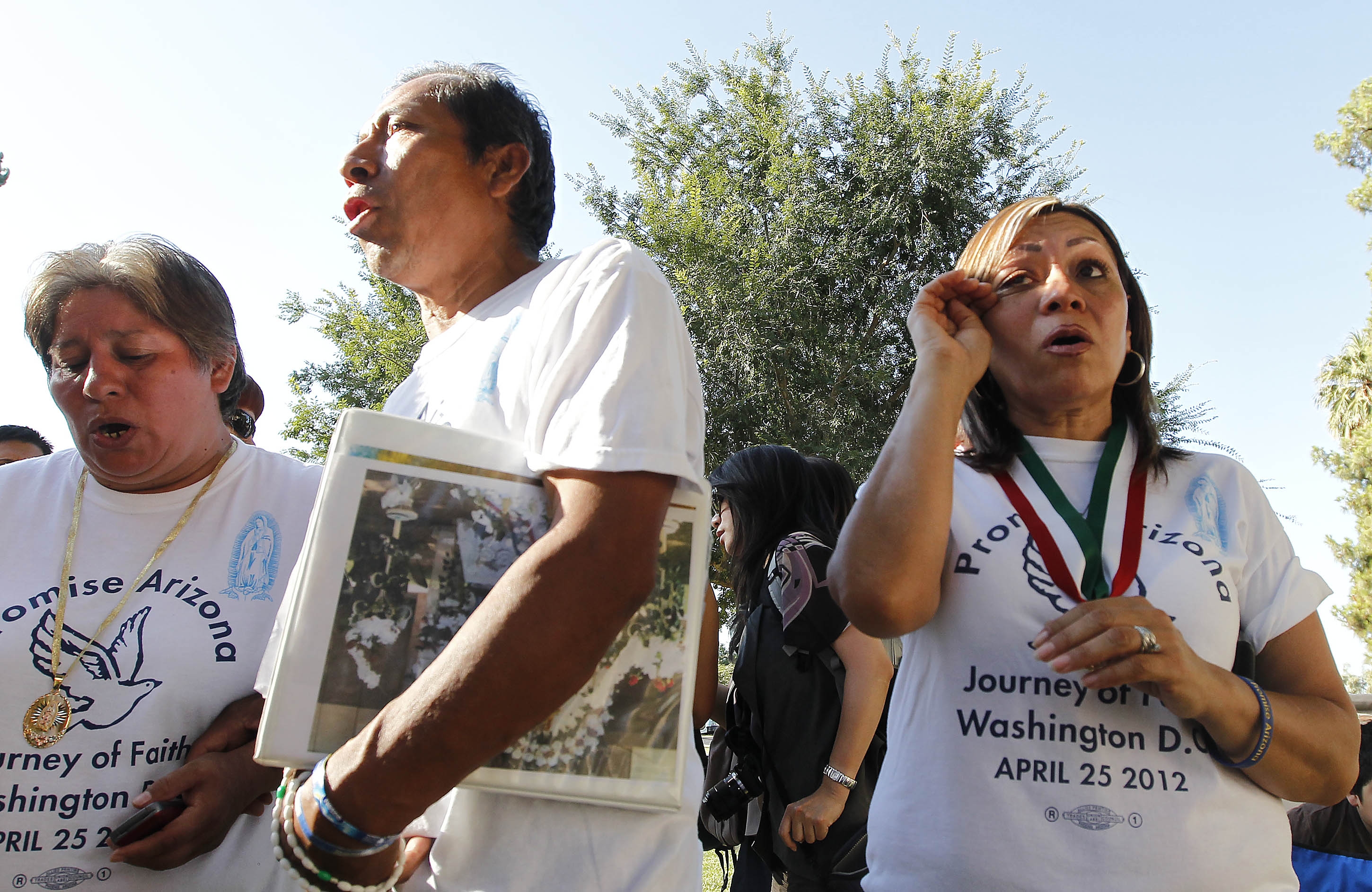 (CBS News) WASHINGTON - The Supreme Court on Monday invalidated three provisions of Arizona's immigration law, but it kept in place -- for now -- the provision allowing the state to require police officers to enforce immigration laws.

Arizona's law S.B. 1070, passed in 2010, made it a crime to be in the state as an undocumented immigrant. The high court on Monday unanimously declared it too early to strike down the most controversial element of the law, which requires police officers to review a person's immigration status if they suspect that person is in the country illegally. Once lower courts rule on the matter, however, this part of the law could be thrown out.

"I think it's really great for immigrant rights advocates and immigrants," said Professor Bill Hing of the University of San Francisco School of Law. "Especially since [Chief Justice John] Roberts went along with this."

The court's ruling, however, failed to satisfy some immigrant advocates.

"Today's decision upholding the worst part of SB-1070, represents a grave threat to the civil liberties of citizens and non-citizens alike," Arturo Carmona, executive director of presente.org, said in a statement. The provision allowing local officials to enforce immigration laws, he said, "must be defeated in court appeals, in the streets and in the legislatures throughout the land. We cannot and must not allow racial profiling to become the law of the land again."

Only eight of the court's nine justices ruled on the case because Associate Justice Elena Kagan recused herself. She served as President Obama's solicitor general when the administration decided to challenge the law.

In a statement today, President Obama said he is "pleased" the court struck down some of the law's key provisions. "What this decision makes unmistakably clear is that Congress must act on comprehensive immigration reform," he said. "A patchwork of state laws is not a solution to our broken immigration system - it's part of the problem.

At the same time, the president added that he remains "concerned about the practical impact" of the provision the court upheld. "No American should ever live under a cloud of suspicion just because of what they look like," he said. "Going forward, we must ensure that Arizona law enforcement officials do not enforce this law in a manner that undermines the civil rights of Americans, as the Court's decision recognizes."

With its ruling today, the Supreme Court made clear that immigration law is undoubtedly a federal responsibility, said Professor Michael Scaperlanda of the University of Oklahoma College of Law.

"The court is taking seriously the federal government's primary role in regulating immigration because of its implications in foreign affairs," he said. "As far as the states go, I think it's a pretty significant blow to state attempts to regulate immigration."

The Arizona law inspired conservatives across the country to adopt more aggressive measures against undocumented immigrants. Other states such as Alabama have similar immigration laws on hold, but it's now possible lower courts would follow the Supreme Court's lead and strike down those laws.

Whether other states get to keep their laws would depend on the specific provisions, Scaperlanda said. The Supreme Court in 2011 upheld another Arizona immigration law, which punished businesses for hiring illegal immigrants. Scaperlanda noted that this type of state-based immigration enforcement has been explicitly allowed by the U.S. Congress.

Aside from those types of laws, Scaperlanda said, "deviation from the states, even where the states are attempting to help federal law, will be looked at as obstacles" to immigration enforcement.

While the court's decision focused on federal supremacy, many opponents of the law remain concerned about the prospect it will engender racial discrimination. After the law was passed in 2010, it spurred huge rallies across the country, with protesters charging the measure smacks of racism.

"The court is acknowledging to an extent that there are concerns of civil rights and otherwise, but those concerns are for another day," said Kevin Johnson, dean of the University of California at Davis School of Law. "In some ways, it's very legalistic, which may be unsatisfying to some."

There are still pending court challenges to S.B. 1070 on the basis that it violates the 14th Amendment's equal protection clause. Those challenges could continue to "percolate" in lower courts, according to Johnson. But it's more likely, he said, that the law could be struck down after the provision requiring officers to review a person's immigration status goes into effect and someone sues based on racial discrimination.

"If I had to guess, [this provision] gets implemented, a U.S. citizen of Latino ancestry or a lawful immigrant gets pulled over and arrested and sent over to Immigration Customs and Enforcement and claims, 'You did that because I'm brown, because I'm Latino," he said.

Johnson noted that the issue is nothing new to Arizona, where Maricopa County Sheriff Joe Arpaio has been sued for discriminating against Latinos.

"It's a problem in Arizona, frankly," Johnson said.